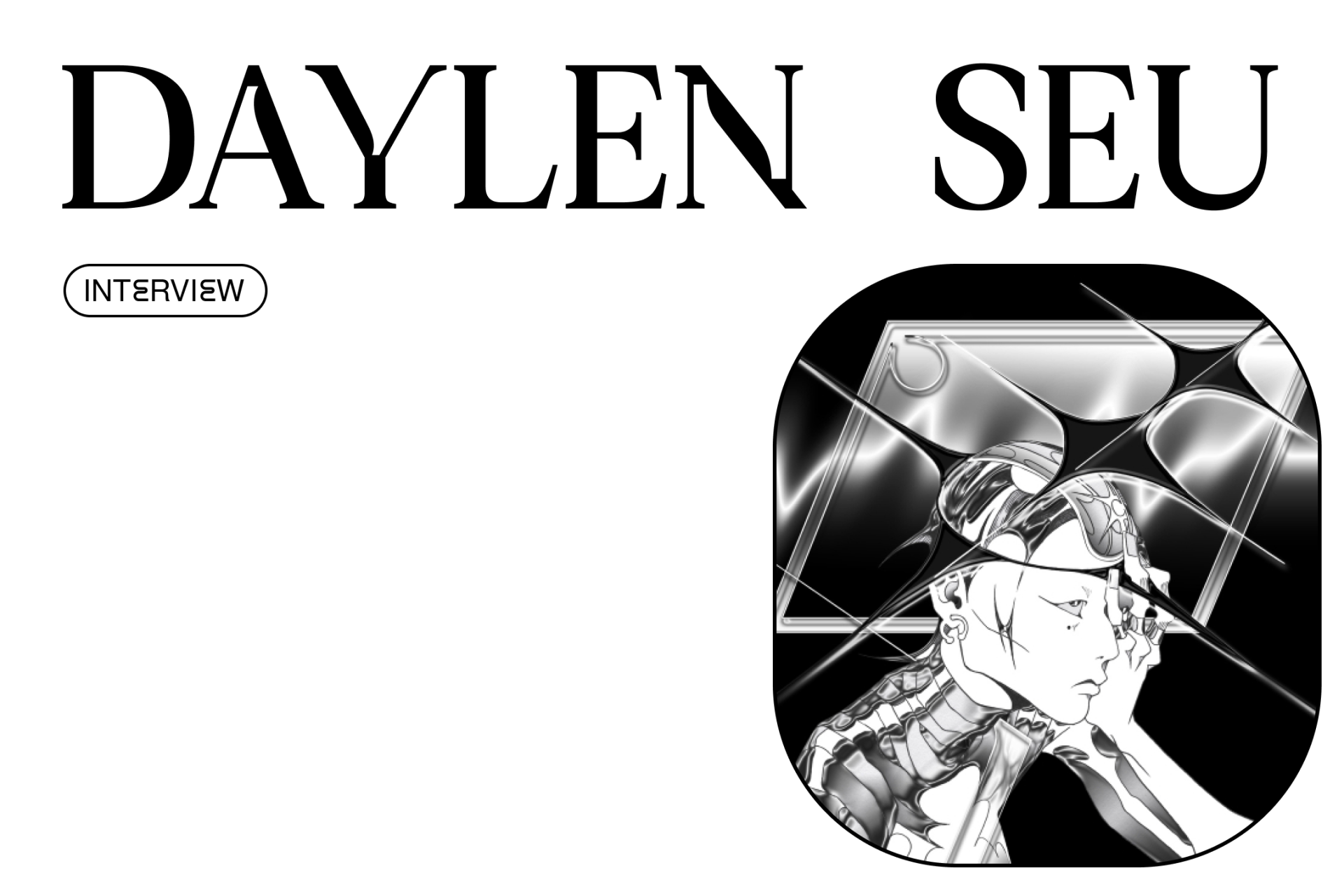 Daylen Seu on tapping into dreams and nightmares.

The crossover horror manga animator and comic artist unleashes the subconscious to shine a light on deep, dark emotions.

Through her darkly feverish animations and comics, Daylen Seu creates worlds around the feelings she can’t quite grasp with words: sleep paralysis, repressed anger, and the turbulent business of living. Inspired by horror manga and films, Daylen’s illustrations are made of intricate forms in heavy contrasts—she’s skilled at drawing light from darkness.

She’s built a multidimensional practice exploring these themes and styles: She was an Electric Objects creator; she creatively depicted sleep paralysis in her short film Gawi; and her haunting aesthetic attracted experimental electronic musician Oneohtrix Point Never, who commissioned her for his “The Station,” music video.

For her first NFT, she’s reaching back to earlier, more personal work that deals with the complexities of identity. In this interview, Seu tells us about how she tells those stories in a way that both stands alone and can go deeper, and how animators and comic artists might figure into NFTs in the future.

In the context of the dominant 3D aesthetic in NFTs, your work clearly stands out. How would you describe your style?

I’d describe it as “visible human flaws”—there’s dust caught in the scanner, a messed up line, or misplaced pixels from when I was cleaning up a scan in Photoshop. I’m used to drawing and animating in traditional mediums, but then in the NFT context, my work is considered more “unique.” It just reminds me that frame-by-frame animation is slowly on its way out, and in the process, there is some distinctive value applied to it.

Can you tell me the story behind Zero Ethnic Rhythm: Right? It’s part of a series?

A teacher once told me that I wasn’t Asian enough and that my work had no ethnic rhythm, so I went and created a series of drawings called Zero Ethnic Rhythm. They're based on a culmination of my feelings surrounding the topic of identity at the time.

The four pieces in the series tell their own stories individually, but have a bit of an “Exodia” effect when all viewed together. Also, with the series, I was trying to further experiment with marrying my pacing in comics, illustration, and animation. The Comics Journal described Zero Ethnic Rhythm as, “Artistically torn. Schizoid. Two or more artistic personalities at war with each other.”

What opportunities do you think NFTs present for comic artists?

Right now, NFTs mainly benefit digital artists and animators, which is cool because there wasn’t much of an art market for their work previously. Speaking from my own experience with making comics, you create hundreds of copies to make them accessible to everyone, especially to an audience who can’t afford crypto.

The feedback I’ve been reading from the more vocal independent comic artists has been negative, and one of the reasons is that the missions of both parties conflict entirely. You could mint a .pdf of a comic, but there’s not much joy in having only one person who is able to access that large of a body of work. The only way I could see it potentially working would be collectibles in the form of singular pages or animation frames. Avid comic collectors would love that.

How is releasing a digital artwork different from the zines, prints, or comics you make?

The pieces I make to post online and the ones designed for printing are approached differently during the process. Since I color and finalize my drawings digitally, there’s no discrepancy or delayed expectation of what the final result will look like—it looks as intended when released digitally. Sometimes printing goes horribly wrong or adds an unexpected charm in its texture and physicality. I’ve released one of my short films online, which outside of film screenings, exists only digitally. You push it into the ether and remember it exists once in a while, like cleaning out your bookcase and finding something you worked on years ago. I do try to approach both with scarcity, I don’t want quantity over quality for either, but both have their positives, and as long as people can enjoy or react to my work, I’m happy no matter the form.

I start with an emotion, then over time, the drawing comes together like a puzzle. Some drawings start off with sketches I've made during figure drawing sessions or they can start with a throwaway shape I drew in a sketchbook years ago. I used to enjoy making collages from found images, which has carried over into my current practice. As I'm creating them, I'll think about how to capture a moment and condense the pieces into one cohesive image. Does the gesture, gaze, and direction imply that there is more going on outside of the frame? Comics and films are projects that require more time, so I research and develop a visual motif through panels or cuts that fit the plot I'm going for.

What's your favorite emotion to tap into when creating?

My nightmares and sleep paralysis experiences often inspire my work. I wish I was better at lucid dreaming, but usually there’s an inner “voice” that takes the control away from me again during my dreams. The lingering feelings from these nights are anger and fear, and I try to communicate them in ways that are new and exciting to me. From a positive outlook, the increased frequency of vivid nightmares over the past year in quarantine have given me more to work with.

You’ve worked on musical collaborations in recent years, it even feels like there’s rhythm in your animations and stills. Where do you go creatively on commissioned projects that you don’t in your solo work?

Usually the artists who approach me give a lot of free reign. I ask what their feelings were when creating their music and then I will incorporate my own interpretation of the world they are trying to build. So far I’ve been lucky with those I work with, their intentions and references overlap with my own or there’s a common feeling we can agree on. For example, in the recent release of CFCF’s Memoryland, I was commissioned to build and illustrate 5 characters existing in the years 1997-2000. In his words, it’s about “the gulf between our anticipation of the first taste of adulthood and our disillusion on the other end of it,” and that feeling is what drew me into wanting to work on this. I am creating visuals for someone, but it goes beyond the aesthetics. If we are able to connect on a more human level, it inspires me to create work that hopefully elicits a deeper response in the audience. I do animation work for studios as a day job, so my approach in working with musicians isn’t too distanced from my solo work. The main difference is that there are more restrictions than working solo, which pushes me out of my usual headspace, and allows me to search for more creative ways to marry our visions together.