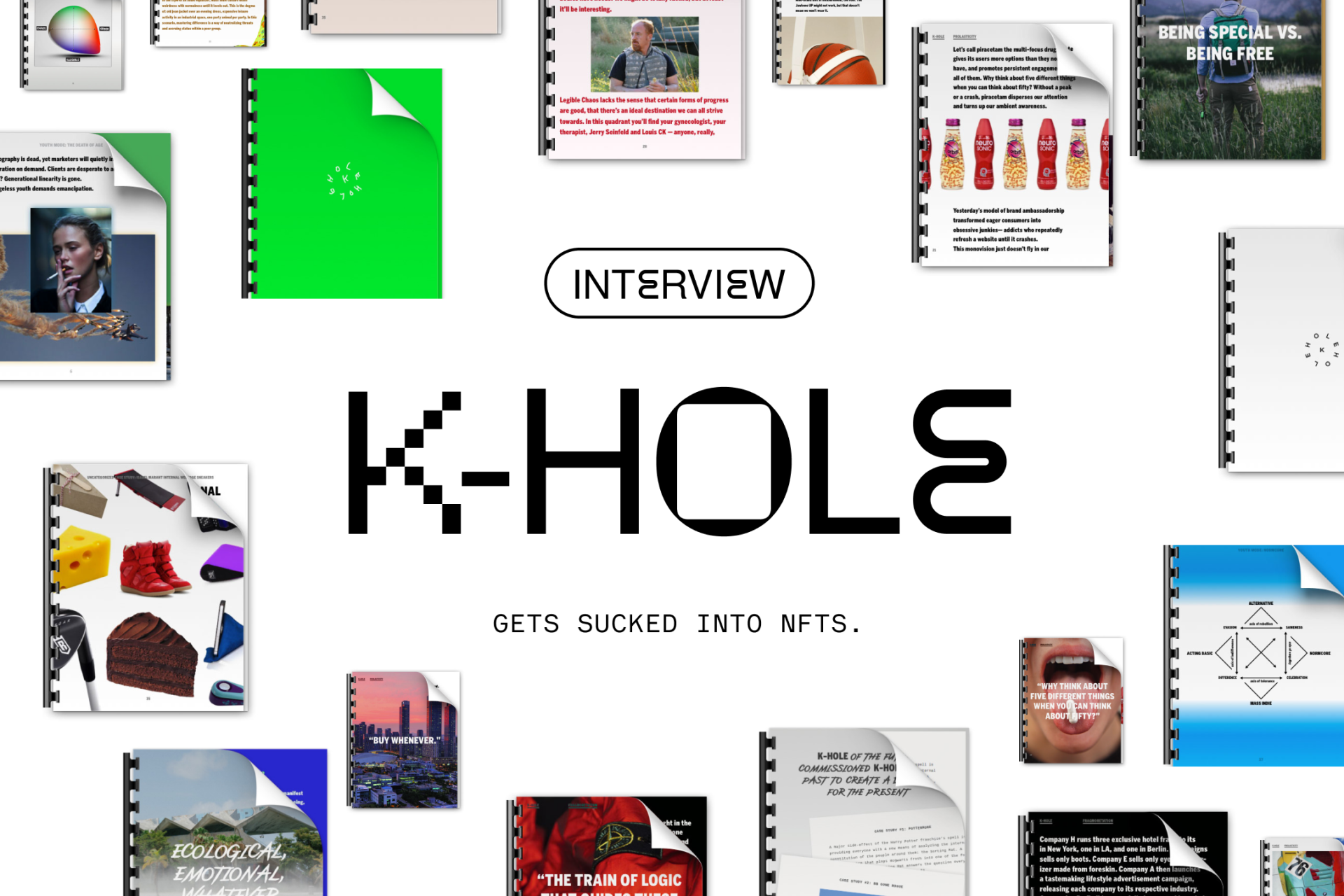 K-HOLE gets sucked into NFTs.

The cult-favorite art-meets-commerce critique collective makes a comeback to report on the state of cultural crypto.

K-HOLE returns, if only temporarily. The once-defunct art collective parading as consumer trend forecasters includes Greg Fong, Emily Segal, Sean Monahan, Dena Yago, and Chris Sherron, who, from 2011 to 2016, connected the dots of culture at large, distilling their observations into five trend reports. As consultants to the corporate and art worlds, they worked with Coach, Kickstarter, MTV, and the New Museum, and at their peak, they coined the term “Normcore.” Observing and communicating culture for the purpose of molding mass-consumption strategies is what art’s for now, right?—K-HOLE did it best.

Instead of just analyzing trends, K-HOLE explored how culture functions and what it does to the people who create, use, and consume it. So it makes sense that the group is back to dust off a few of their most coveted PDFs, test the waters, and share their insights on all that’s happening in NFTs. For the ten-year anniversary of their first report, K-HOLE is minting two works to inscribe their legacy on the blockchain: the Normcore Semiotic Square and the Brand Anxiety Matrix. But this isn’t entirely their first go at crypto. Last week, Emily successfully crowdsourced her upcoming novel, Burn Alpha, on Mirror, a publishing hub for writers looking to experiment with NFTs.

We interviewed K-HOLE to see what’s possible with NFTs and get their take on how to collectively push the medium forward.

How did K-HOLE come together as a collective? Can you describe the processes you use for collective design and decision-making?

K-HOLE, like much of today’s culture sphere, is a product of the desperation that followed the 2007 – 2008 financial crisis. Around 2009, we got a bunch of PDF trend reports from our designer friend Amelia Hall and realized that the industry was trading in armchair cultural analysis for a lot of money. The format—pop sociological concepts and neologisms wrapped into slide decks and PDFs—was being used towards bullshit ends, and we saw a lot of potential for us to detourn the form and launch our own critique.

Under the pretense that new ideas emerge in art contexts, our early-twenties foundational thought was that we could short-circuit the commercialization of the avant-garde by dumping “outsider” logic directly into a format that was legible to and circulated by a more explicitly commercial sphere. At the same time, we would present our work, which was supposed to be alive in a way that a painting or sculpture typically isn't, in the context of the art world as a form of cultural commentary and criticism.

Obviously, the world has changed tremendously since then, especially with regard to how new ideas emerge. But K-HOLE was a way for us to circulate ideas that were otherwise gate-kept—by marketing agencies for cash, or by the art world via art speak—and get a seat at both tables.

Our process for making decisions was purely intuitive. We definitely were not looking at data. Like critics, we simply tried to read the world intertextually, making connections and inferences and then discussing those ideas with each other a lot. We expelled our thoughts into Google Docs, edited them down collectively, and wrapped them into sick-looking PDFs that we felt landed a punch. It was very natural.

How has trend forecasting evolved over the last decade? Were there particular trends or movements you anticipated that came true, or ones that haven’t materialized yet?

It's extremely basic to say this, but Instagram, YouTube, and Twitter have had the effect of accelerating culture a lot, so trend cycles emerge and die faster. Look at TikTok for five minutes and you'll witness thirty new trends. With all of the froth and chaos, and it becomes much harder to separate major shifts from minor ones. But it also matters less, because it's also way more difficult to influence and control culture now, at least in any enduring or universal way.

The Semiotic Square from 2013 that we're releasing on Foundation is a remarkable artifact because it still feels generally accurate. The biggest difference between the world then and the world now is that the traditional markers of authenticity have become less relevant, thanks to how irredeemably anti-social they are. Conversely, the general flavor of youth style today is actually deeply Normcore, in our original sense, which probably nobody wants to have explained here. It's kind of like cosplay: superficial and cosmetic, yet deeply intentional.

Artist collectives have been around forever, but crypto is enabling a new kind of collective to emerge. Referencing Toby Shorin’s “Squad Wealth” and the creation of art-focused DAOs, do you imagine recontextualizing K-HOLE in a crypto-native way?

That seems unlikely. After all, there’s no Squad Wealth without Squad Grief :')

What are some of your observations about the emerging behaviors in the NFT space?

There is a flavor to NFT art and the flavor is the internet. Right now the majority feel particularly dialed to the tastes of programmers, developers, and other more tech-centric communities, which makes sense because crypto is still largely ungraspable by the general public.

What’s a concept that is missing right now from the language of how we talk about NFTs, and how would you define it?

The crypto space is simply too cryptic. Try explaining an NFT to your parents. The best metaphors right now are insanely uninspiring: baseball cards and certificates of authenticity. There are other ways that NFTs can be utilized, but we’re lacking a metaphor that’s appealing or engaging.

What do you see as the next opportunities for creatives in the NFT space?

Many artists have said they feel empowered to turn down client work because they’re able to sustain their practice with NFT sales. How would you pitch NFTs to any of your previous corporate clients now?

That's a good question. You’d have to hire one of us to find out.