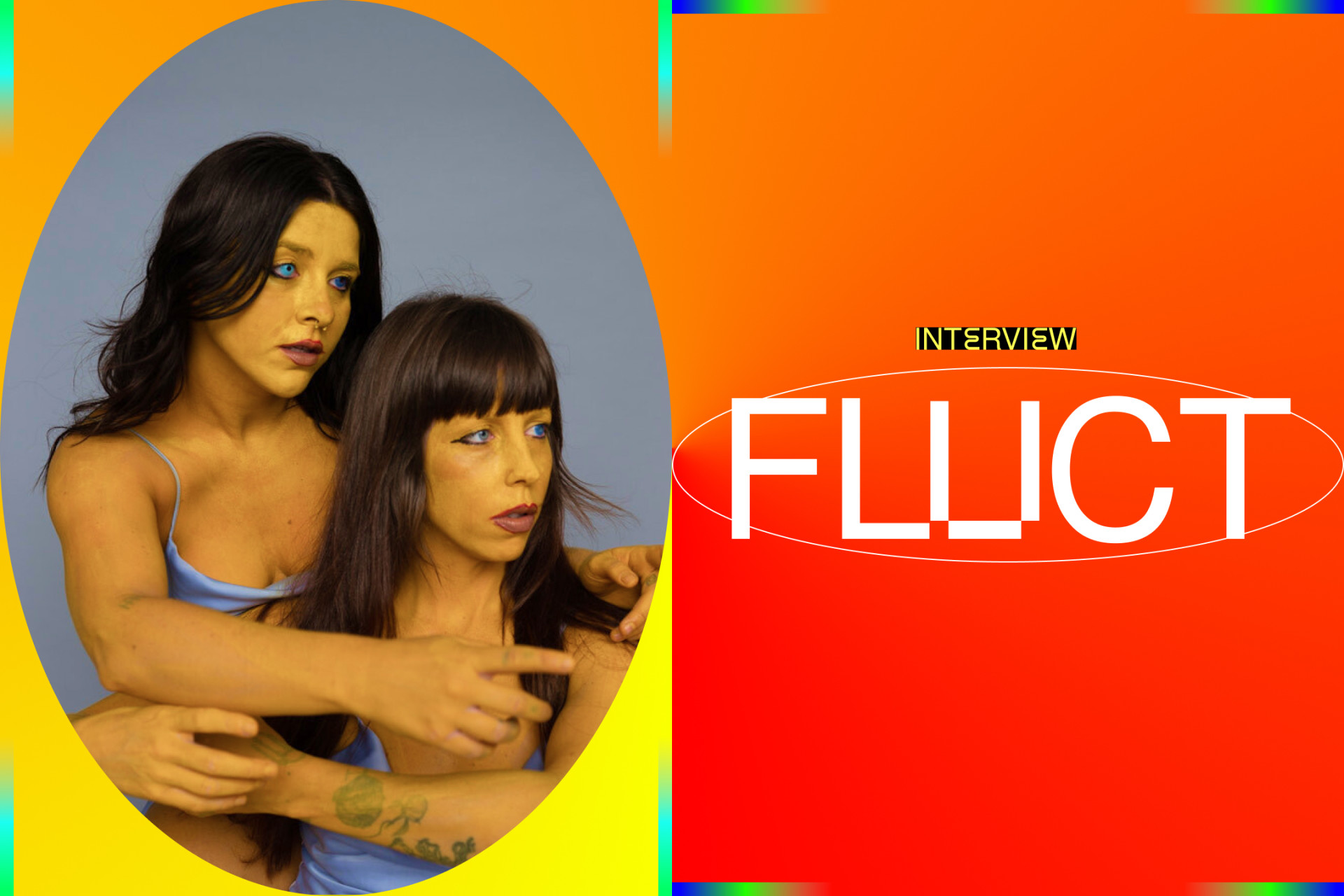 The future is in FlucT.

The performance art duo are using their bodies to push boundaries.

Sigrid Lauren and Monica Mirabile have been collaborating as the performance art duo FlucT for over ten years. Together, they create video installations, original soundscapes, sculpture, and choreography to challenge the capital obedience of American culture. They manipulate their bodies in unique forms of violently intimate dance, drawing undercurrents of narrative from recent events, personal experience, and psychology. In doing so, they mimic the way technology processes information—glitching their movements as a way of reclaiming control.

FlucT has performed and exhibited at the Guggenheim, The Broad, Miami Art Basel, SIGNAL, Queens Museum, and Andrea Rosen Gallery. Their large-scale choreographed productions have included a multiplicity of performing artists, dancers, non-dancers and technicians. They’ve frequently collaborated with musicians, and founded Otion Front Studio, a performance and dance space in Brooklyn, New York. Now, they’re pushing boundaries with their first ever performance art NFT, Is it god or am i dog OBJECTS.

We spoke with them about implicit and explicit forms of control, taking inspiration from glitches found in technologies, and what it means to translate the physical body into virtual space.

What does the name FlucT mean to you?

Monica Mirabile: Recently, we had a conversation with someone about the feeling of complexity—that feeling when you can move back and forth on a spectrum of emotions amidst different concepts, arguing for good and evil, the angel and the criminal. We agreed that we both fluctuate daily, hourly, in conversation and through state changes and that this feels honest. FlucT is a philosophy, if I can coin it that way right now. Tomorrow it might be a movement, but it all exists under the same umbrella of empathy. It's always been an understanding we've had with each other.

Sigrid Lauren: FlucT was originally short for Fluctuation, but now FlucT means much more. It's the way we compose movement and sound together while we stab at these existential qualms. The way we work and perform feels both contained and uncontainable.

When did you first start performing together, and how has your collaboration evolved over time?

Monica Mirabile: We started performing together in Baltimore in 2010. We found ourselves in our warehouse-turned-DIY-performance-space flipping amongst each other with a kind of enthusiasm that fought the demons that brought us into conversation with one another. The first conversation was about family trauma. Looking back, FluCT was founded as a much-needed support system processing terminal, and it remains one today. It's hard to pinpoint what has evolved as it's always evolving but it has nurtured the creation of a community. We've worked with many people under our self-proclaimed techniques for exfoliation. I think this is partially why we're interested in NFTs and Foundation in particular. There's something exciting about the way that this system can potentially support a community rising out of ideals surrounding decentralized power mechanisms.

Sigrid Lauren: Our intuition and connection has strengthened as a result of being married for ten years, and I think we process with more ease now. We’re not actually married but committed to listening, learning, and sitting to hear the shit, like we go through and see it all. We’re more like soulmates who are mirrors to show the other shades and sides of ourselves that we've missed, which is not always pretty. We've developed these behaviors, attitudes, and responses from the world around us to survive, and it can be painful to confront. But we've committed to an active listening process and practice which is brutal, rewarding, and sexy. As much as we’re psychologically intertwined, we’re also intimately familiar with each other's physical body, its instincts, communicative habits, and the fact that we are both down to put our eyes and noses at any intersection of the other's body. It's just flesh.

How does choreography change when it's presented in virtual space?

Sigrid Lauren: Choreography becomes mimicable and accessible when you are in the timelessness of looping content, it's no longer felt solely by your nervous system but it becomes accessible in a repeatable way. The instructions for the illusion or emotion are transparent and you can begin to walk the lines yourself. The intensity of a live FlucT choreography is of course missing but there is something added in its ability to influence.

What are the challenges and opportunities for turning performances into NFTs?

Monica Mirabile: I have a lot to say here. I won't fit it all in but if you're reading this and interested in conversation, I'm happy to chat. Same thing goes for the previous question; I like virtual spaces because they open space for communication. I feel very “FlucT philosophy” about it all, meaning I am back and forth on it.

I'll start with: NFTs can accrue value over time in a way this has been rare for performance. As artists who engage in an art world, this is wildly different from typical art world structures. As you may or may not know, paintings and sculptures accrue value over time but they don’t benefit the original artist unless they got the collector to agree contractually to do so. With NFTs, it’s built right into the blockchain. That’s pretty interesting to me. Currently, performance is primarily tied to the gig economy, where it is commissioned for a one-time fee that doesn't take into account a huge array of time and labor. There’s potential for some kind of ongoing support with NFTs.

In addition, I really love that we as artists can place value on the ephemeral in this way, as it is a “token” and not the thing itself. This also happens when you watch a performance. The possibilities are so broad because performance is not only choreography or movement or show but it's also behaviour and the way we act so it can influence this potentially new way of resourcing.

I say potentially because although I have seen small examples, it’s still an onion. It gets tricky with the current power structures—crypto gatekeepers are monolithic, looking through that similar heavy lens where it's hard to imagine horizontal support when there are only eight men who hold most of the money in the world. It seems that celebrities gain the most right now. I hope that this will change with the lateral approach in which artists are supporting other artists, so the power becomes more distributed. It doesn’t actually occur much IRL under fiat capitalism. And, well, it still is capitalism—in that it’s currently extractive, extracting resources of minerals and energy...but I know Wall Street does the same thing. I am excited about ETH2 when it actually happens. We've also been researching carbon offsets like Offsetra.

To bring it back into fluctuation, I'm really into this idea of transubstantiation with NFTs—or, “the body of Christ is the wafer”—in that, we choose to believe and consume value and it creates a baseline within the social contract. Performance is both more real and similar as long as the patron believes in its value. NFTs are a potential way to support and resource artists making time-based work and I’m always changing my mind on the truth of it.

How does your choreography carry on traditional dance, and where does it break into a more experimental practice?

Monica Mirabile: I've never really been engaged in traditional dance, as much as I wanted to be a ballerina. My mom couldn't afford the classes so I just danced in a tutu on the living room couch. It’s always been experimental—it’s been about the way I feel, or want to feel, or ways to connect. We often say FlucT is as if aliens were watching American consumerism from above on something like a YouTube channel and then something like TikTok emerged and they started mimicking it—we’re the result of that conglomerate and it looks pretty fucked up but also sometimes sweet and protective. And well, we’re actually taking care of each other.

Sigrid Lauren: Our dance has never been focused on the technicalities of form like in traditional dance. But like traditional dance, we do play with control. The nature of a FlucT piece always revolves around control and lack thereof, but in a more literal and aggressive way. We are restraining and manipulating each other. In a way, making the invisible violence of the everyday visible. We also have synchronized movement—a story of myth being shared where the choreography offers insight into the culture of its participants. But our process for creating choreography is experimental. We choreograph the audio to meet the movement, typically with over 100 samples taken from pop music, underground artists, podcasts, YouTube media and more—and we have a strong attraction to deconstructing the semiotic gestures of our life experiences.