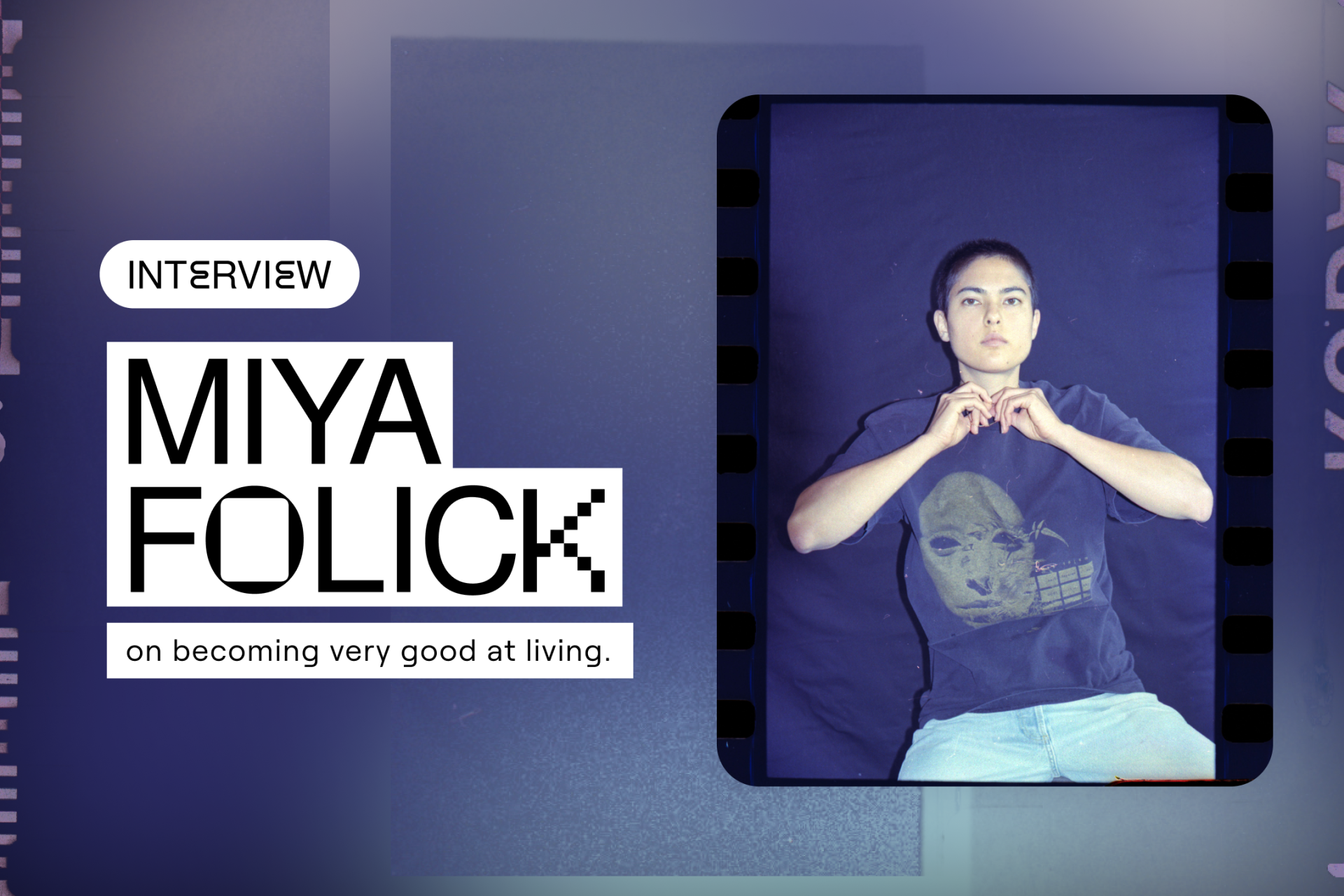 How one memorable karaoke performance inspired the artist’s first NFT.

The accomplished indie musician Miya Folick was sitting in a karaoke bar when an old man stepped up to the mic and belted an impassioned rendition of Whitney Houston’s famed single “Dance with Somebody.” While he didn’t have the voice to pull it off, Miya saw something more in him: a deeply present, emotionally significant way of grabbing a hold of and embodying life. The moment stuck with her for years until it became the storyline for one of her songs—which debuts today as her genesis NFT.

Made in collaboration with visual artist Amrit Pal Singh, the series includes four pieces that interpret four audience members who observed the original performance. Un-produced, un-mixed, the song is a raw document of Miya’s voice in its purest form.

What was it about this demo that made it the right fit for your first NFT?

I think it’s partially related to how I’m seeing the NFT space, more as an observer than anything, I see people getting excited about making connections and supporting each other’s work in ways we haven’t been able to because we haven’t been in public spaces. And this song about the connections made at a karaoke bar felt like a natural analog to that.

Then, beyond that, I think I wanted to share something that felt more intimate than a traditional music release. I wrote the song two and a half years ago and always loved it, but felt that it would never be on an album because it’s stylistically so different from everything else. It sounds super homemade and almost like there's this toy quality to it. I tried to re-record it once to make it sound better, but it just didn’t work. It only works as a raw demo. When I was thinking about releasing an NFT, I thought, “Well, what is a song that I haven't really been able to release through the traditional channels?” I wanted to show a different side of my creative process.

The process of getting to an album is so interesting, and people rarely get to see it. There are songs and scraps that don’t make it anywhere, even though they’re a real part of the journey. This particular song touches on a lot of the topics that I’m interested in, and distills how I feel about so many things. I guess I didn’t really realize that until I chose to use it for my first NFT. Then, I thought about it a lot.

How would you describe those qualities in the song?

I wrote a poem called “Karaoke” in 2014 about an experience of being at a karaoke bar and watching this old man perform a song really poorly. All of the younger people cheered him on in an excessive way, as if there was an unspoken agreement to reward, and value, effort and presence—not necessarily like skill and talent. It was a feeling like we all understood that he wasn’t very good at singing, but he was very good at living. He showed up at this bar alone, he got up to sing this song because he fucking wanted to, and he basically performed life for us. The poem wasn’t very good, in my opinion. But, there was something about that night that affected me. I think the Old Man, who this first NFT is modeled after, really became this source of inspiration for me for years. I just loved the idea of singing badly in public. I wanted to figure out how to get that story right.

I wrote the song many years later. It feels, for me, closer to the meaning I was originally trying to convey in the poem. I think I’ve been interested in communities and these roles we play for each other for most of my adult life because I often feel a bit like an outsider. I love the idea of intimacy and belonging, but I struggle with participating in it, so instead I write about it. I didn’t realize it as I was writing, but in hindsight, I was kind of using this massively popular hit song “I Wanna Dance with Somebody” by Whitney Houston as a sort of shorthand for connection. I repeat that line in the chorus.

And the song is this reference point from which all these people connect. I've been thinking about it a lot in relation to my music, because I do think I'm often trying to capture that familiarity of pop music, but I’m coming at it from the perspective of an observer, so there’s this baggage to everything. It comes out kind of wrong and raw, which is what I like.

So I think it's like an interesting meditation on where I stand in my music and like making this kind of weird, eerie sounding song about this ubiquitous pop song at something as common as a karaoke bar. And trying to feel inside of it, but also feeling outside of it. I know it's a very complicated description, but the more I think about this song the more it feels like a pretty true representation of how I often feel. It's like I'm observing, I'm trying to understand all of these roles that we play for each other. Kind of obsessing about the roles, because I never quite feel like I’m playing mine correctly. But, in the end, what I really want is to dance with somebody.

The mental image of an older man coming up to the microphone with such confidence, makes me think about the NFT space and how much artists are putting themselves out there with their projects.

Just putting yourself out there is part of what it is about. You can be a Whitney Houston-level singer and kill it at karaoke, but you can also be a person who loves a song so much and just kills it because you are earnest. You’re basically saying, "I'm here—and I want to be here. I'm taking up space—and I deserve that space." I've struggled with that in my life. When I see spaces where people are putting themselves out there, it piques my curiosity. I like watching people take risks.

How did you choose Amrit Pal Singh as a collaborator?

I knew I wanted it to be a portrait series, which just felt kind of obvious because there are these four characters in the song. And I knew that I wanted to split the song up into pieces. I wanted to highlight the fact that there were all these characters. And when I came across Amrit’s work, it felt right because he makes toy faces and there is a toy-like quality to the production of the song.

I also felt that there was a connection between the idea that this song is revolving around this pop song, which I think is like the sonic equivalent of a toy. It’s this piece of music that kind of exaggerates and also distills down human emotion into this extremely palatable, but also moving, form. And a toy face does the same thing.

And then I reached out to Amrit. We did a Zoom. He's very sweet. And I think he really responded to the story behind the song. He was also just really excited about collaborating. I think collaboration seems to be at the center of his work in a certain way. If you go through his Twitter feed, he's always posting all these like inspirational thoughts about work and about art. He’s very supportive of other people in the community. I like that about him. So I think it felt right creatively, and then I also just liked him as a person and thought it would be fun.

When did you start writing songs and playing music? How did you discover your own voice as a musician?

My mom gave me a shitty acoustic guitar in college because she was psychic, and knew that I would need it. I started playing music as a form of expression. I had a hard time in college, I was really lonely and I felt really isolated. I’d write songs because I had no friends and it felt good to do. But it took me like several, several years to decide that was something that I wanted to pursue as a career. I didn't start putting music out more professionally until I was 25. I started out writing completely by myself, like completely alone and making demos on my laptop. And then just like slowly my network and my community of collaborators expanded.

But I think part of this release and part of I think what I would like to do moving forward is to open up a little bit about my process of making music and what it sounds like when I make a song alone with my computer, rather than when I take a demo and bring it to a producer and then it gets mixed and then it gets mastered and then you hear it. In a lot of ways, I love that more traditional process because I can be such a perfectionist and want it to sound perfect when it gets out. But I also think there's something lost there.  Demos are very revealing. Like you can kind of hear the effort and hear that I'm discovering something in real time.

All the vocals are recorded as I’m writing. I wrote the verse and recorded it to hear how it sounded, and that’s the vocal you hear in the NFT.

Right now, I'm more interested in that roughness and honesty than trying to create something that's like sonically clean and perfect. I find that when my music goes through that process, I relate less to it when it comes out the other side. I’m trying to share more of the process. Let things be rough. I tend to be pretty private about my life in general and I am kind of bored of being so private. I want to share more.

Do you have a personal association to the “Dance With Somebody” song?

When I was making the song, the idea that the Old Man was singing “I Wanna Dance with Somebody” just came to me. It felt good because it’s a highly recognizable song, but it’s also an expression of a desire. Little gems like that are exciting in music, because you have to be very frugal about your syllables. Take that double meaning when you get it.

I personally feel like I’ve always been aware of the Whitney Houston song “I Wanna Dance with Somebody.” Like I was born knowing it. I can’t remember when I first heard it.

If there's any specific memory, it’s that there was a dance studio in Los Angeles called the Sweat Spot that actually, very sadly, closed during the pandemic, but they'd have these massive dance classes with people of all different levels. I remember one specific morning they played this song, and it just felt like reaching some sort of ecstatic, communality together. That’s the first memory that comes to me.

But when I was writing the song it honestly just popped out of my mouth and it felt right. In hindsight I was like, "Oh, this is an interesting little trick that I did." I didn't really write a chorus. I used a song that everyone is familiar with as a shortcut. Almost like cheating. It’s playful and fun, so I just kept it.