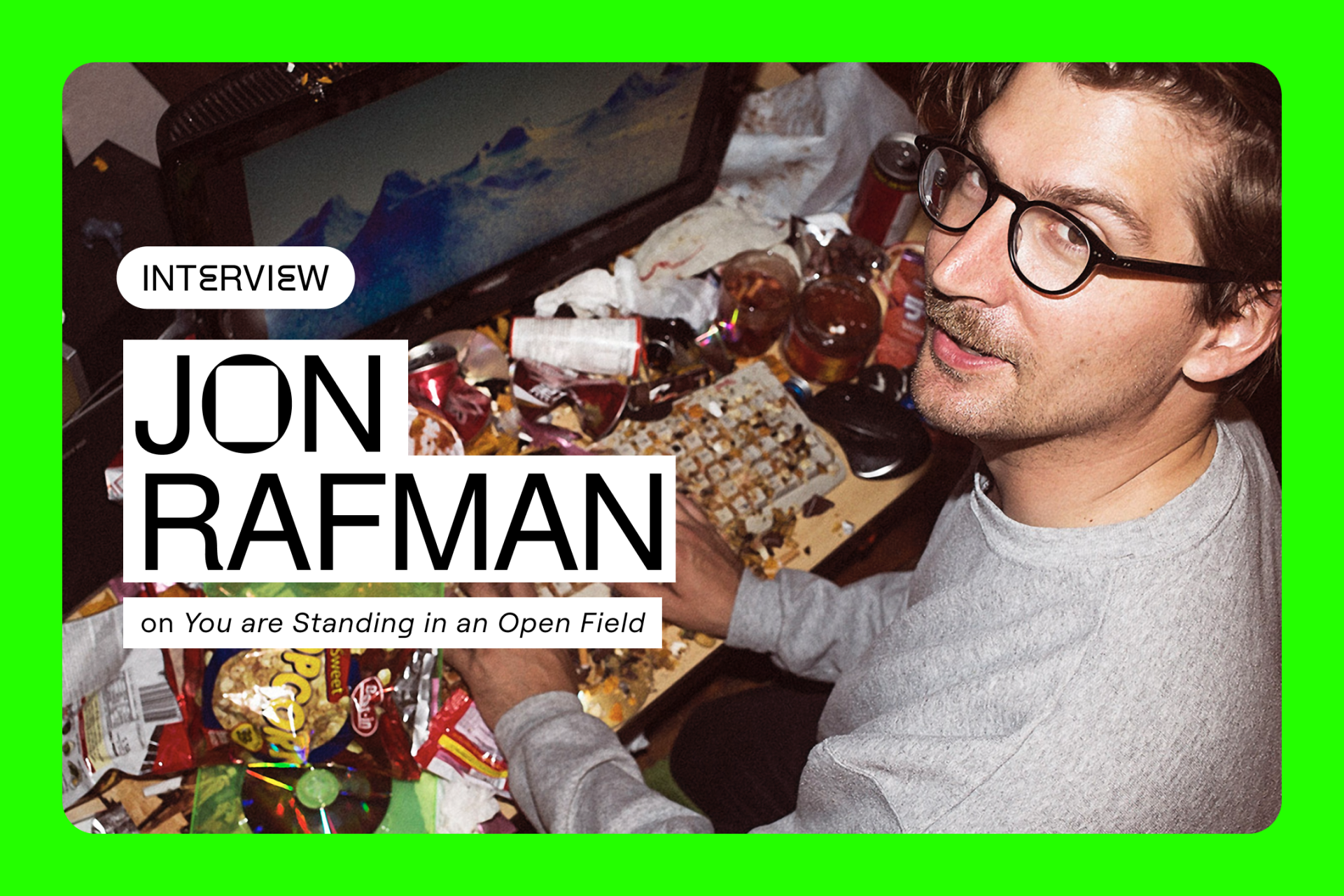 Jon Rafman on standing in an open field.

We spoke with the renowned artist about creating poetic visual narratives that critically engage with the present.

Jon Rafman has always been an explorer, navigating hidden spaces of the internet and revealing how technology affects consciousness, identity, and relationships. He started as a filmmaker using found footage from the internet to construct narratives and then rose to great influence in the Net Art and Post-Internet art communities.

Now, his artistic practice is synonymous with recreating and observing online environments like Google Street View and Second Life to reflect on human experience. His work has been exhibited at the Venice Biennale, New Museum, Palais de Tokyo, Berlin Biennale, and Stedelijk Museum, and his seminal Dream Journals are part of the collection at MoMA. And now he’s releasing his first-ever NFTs.

Rafman’s You are Standing in an Open Field series places the viewer at the precipice of a portal where the material meets the virtual world, and the computer screen is replaced with a beautiful natural landscape. Just one step further and we could almost touch the technical sublime.

Ten years ago, you and I were having conversations on video chat about whether there would be an evolution toward a fragmented virtual self and physical self. What do you think about that idea now? Has it happened?

At that time, I was incredibly optimistic and idealistic about the internet and the Cambrian explosion of content creation that the web unleashed. My enthusiasm for the internet was increased by the fact that it allowed me the ability to address paradoxes that have been the subject of art throughout the centuries. I loved and still love surfing the web and voyaging across virtual worlds like Second Life, where one could choose new identities, construct new realities, and live alternative lives. I wanted to celebrate this. Yet, at the same time, I knew it was important to remain critical and reveal the ways the net reflected all the contradictions and tensions in the ‘real’ world. The internet took all the positive and negative aspects of humanity and brought them to their extreme logical conclusion. It was a warped funhouse mirror of reality.

I met some of my best friends, my wife, and my closest collaborators on the internet. I used to say it was my Paris of the 20s. Yet, it has become apparent in recent years that social media has also increased polarization. The internet brings us together and tears us apart; it opens up new worlds while simultaneously alienating us from ourselves and each other. Suppose you compare our current situation to the excitement of the late ‘00s when it felt like there were so many possibilities with all of these new internet folk languages that were forming online. But I remember that we were already discussing social media’s potential for extreme atomization even in our conversation ten years ago. This insane societal division that we already were feeling inklings of has crystallized in recent years.

So much of your work has been about exploring virtual spaces, whether through Google Street View or Second Life, and recording scenes as a documentary filmmaker and photographer. Do you still consider yourself an explorer?

I think what's changed is that in the past, I positioned myself as an explorer of pre-existing virtual worlds (like Google Street View)  where I would simply record, curate, and frame my voyages.  These days I'm still endlessly surfing the web, consuming endless fragments of information online, filtering it, and then vomiting it out. I then sculpt this vomit into an artwork. My most recent film Dream Journal 2016-2019, was made with this binge and purge process and reflects a profoundly internet poisoned mind. I’m continuing my virtual exploration, but nowadays, I use the internet more as inspiration for constructing my own Boschian virtual insanities.

The pieces you’re minting as NFTs show the computer keyboard as a messy frontier for entering into beautiful, fantasy worlds—but instead of being fixed like the photographs you’ve shown previously, the scenes change with the season. Is that how you see them?

I see the computer workstation as a portal, a liminal space between the material and the virtual world. The You are Standing in an Open Field series juxtaposes still lifes of messy desktops with Romantic paintings. In these tableaus, the computer screen has disappeared and been replaced with an epic natural landscape. If you spend enough time online, the screen evaporates, and the so-called virtual starts to bleed into reality or become your entire reality. I see the works as, at once, portraits, landscapes, and contemporary still-lifes. They present our idealized aspirations and our inescapable physicality in juxtaposition. Even though the subject of the portrait is absent, I recognize these cluttered keyboards as portraits, for in each one, I perceive either myself or someone I know.

The painters whose work I incorporate—Albert Bierstadt, Caspar David Friedrich, and others—were explorers of the Romantic era. I see my journeys through virtual worlds of Google Street View, Second Life, and the internet in general as a continuation of their artistic project. Interestingly, these artists didn't necessarily paint en plein air. For example, the Hudson River School painters often traveled across America, then came back to their studio, and would combine all of the most epic landscapes they'd encountered throughout their journeys into one dramatic vista. I believe there is a direct line between Romantic painting and the landscape design in video games like Skyrim. In the romantic era, paintings were trying to express the natural Kantian sublime through their depictions of vast, untamed, and magnificent landscapes. Like Caspar David Friedrich, I, too, am in search of the sublime, but not the natural sublime rather the technological sublime. In our era, the closest I’ve felt to the sublime experience was while I was  surfing the web and stumbled upon a new world within a world within a world. Feeling infinitesimally small amidst the incomprehensible vastness that is the web.

At its core, the You are Standing in An Open Field series is a continuation of my quest in search of the technological sublime, the sublime in an age where everything is mediated through screens. The work also highlights the tension between the real and the virtual, the past and the present, the romantic and the ironic, the prosaic and sublime, and the profane and the sacred. I’ll stop there.

The difference between my NFT series and the physical series I’ve exhibited previously is first and foremost that these are animated video loops with ambient soundtracks. Despite their short length, I find the videos give viewers more of a meditative experience of a space over time. I've wanted to turn these pieces into time-based video works for ages now—I wanted to create a sort of living painting—so this was the perfect opportunity.

The last year has been an intense one for so many people—you’ve been no exception. How have you experienced the real and the virtual bleeding into each other recently?

The internet has brought me up and taken me down. It’s been a roller coaster. I think many people feel this same tension where we’re addicted to it, spend so much of our waking lives in front of a screen, and yet hate it on some deep level. And we're trapped; we can't escape it. To “exist” these days, you have to be part of the stream. The era of making a work of art and having it stand for itself seems to be over. In the past, a single work could cause a riot amongst the bourgeoisie, but not anymore. Now we're in a completely different mindset because we have to keep up with this ceaseless content stream.

At a certain point, things are taken to their ultimate conclusion, and then ideally, we progress and move beyond the contradictions that cause us so much unhappiness. For me, the main question is: is there just going to be an increased fragmentation? Will we continue living in our echo chambers and be algorithmically fed information that we either already agree with or feel triggered by just driving engagement for our tech overlords? Will we continue living in a hyper-niche culture with no sense of unity or true community? Or will we be able to overcome this atomization of society?

As I’ve said before, it’s not the artist's role to predict the future. In my view, the artist critiques and reflects the present. Often, art feels like the future, but only because official culture lags behind the current moment. “Futuristic art" is just a reflection of the present.

You’ve been one of the few net artists to gain traction in the traditional art market and turn it into a viable career. How do you see crypto, and more specifically NFTs, playing into or affecting that system? What’s your take on it?

It's the gamification of reality. It combines aspects of the Wild West and the roaring '20s into our hyper-accelerated times.  I’ve always made sure that all of my work is available online for free. Yet still, a collector or a museum can own the “official” edition. NFTs are a continuation of what artists have long been doing but formalized so that they can benefit artists more. I also see NFT smart contracts as another attempt to re-instill the lost aura of the fetishized work of art into the digital work of art.