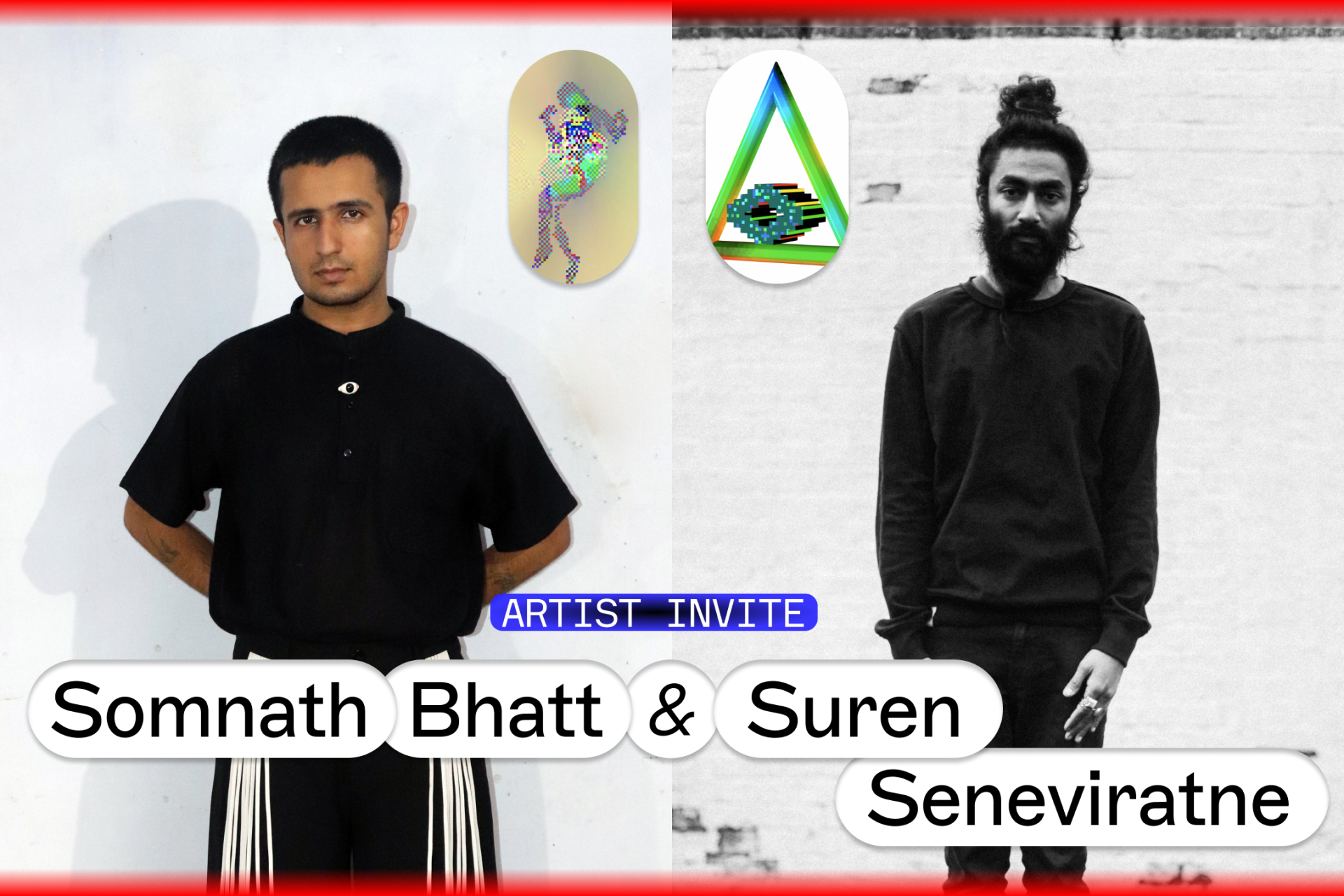 On relishing the unexpected and finding friendships that keep you grounded through the hype.

Artist Invite is an ongoing series that delves into the magic between creators and digs deeper into their relationships on Foundation and beyond. A common thread between artists in the series is that many of them have admired each other’s work online long before ever meeting IRL. For instance, Somnath Bhatt recalls coming across Suren Seneviratne’s work, My Panda Shall Fly, on Tumblr back in 2012. Suren’s thorough process, cross-disciplinary approach, and effortless style have been a constant source of inspiration for Somnath since. Similarly, Suren had been following the Instagram account @m0henjodaro for years before realizing that Somnath was the artist behind the alias. The two regularly exchange emails and share resources and now, they’re navigating the new realm of NFTs together.

Suren Seneviratne: Your graphic style challenges preconceived notions of pixel art. What is it about this medium that speaks to you?

Somnath: I understand the aesthetic proximity my work has to existing pixel art, but I’m not really thinking about the 8-bit/pixel subculture, glorious though it is. I’m delighted that people placed me there, but I arrived at the way my work looks through a process, rather than seeking out this effect from the outset.

When I first started making drawings digitally, I was interested in how repetitive, system-default processes could warp, or distort, the edge of a drawing until the synthetic line began to look organic, unpredictable, pixelated, or even demonic.

Drawn at the lowest resolution in Photoshop, the pixelated drawings convey forms in their pre-symbolic order. I like the metaphor of excavation because it denotes layers: narrative layers, psychic layers, physical layers of color applied to a surface, and Photoshop layers, too.

Your work effortlessly marries elements of religion, culture and spirituality in ways never seen before. How did you discover your true voice?

Somnath: I am constantly embroiled in a fog of panic and turbulent anxiety, and my relationship to “my true voice” feels like my relationship to my bare hands, which I use to dig through a midden filled with filth, shards, and human phlegm.

I feel like I’ve developed this reputation as some kind of semi-unhinged, spiritual person but I am also thinking very practically about income, labor, counter-coloniality, global fashion, and hookup culture. I am interested in using history—not for support—but for illumination. Everything I make is a worthy experiment.

You've been very selective in what you've minted on Foundation so far. How have you approached the burgeoning NFT space and what are your plans going forward?

Somnath: When I linger in the NFT space, I often perceive this ambient sense of urgency, which I’m currently trying to resist. As with all things, I keep semi-jokingly reminding myself that I’d like to be here for a long time, not just a good time. Also, the idea of JPGs or PNGs being sellable objects is actually quite old, by internet standards. The furry community, for example, has had a rigorous micro-economy of selling ‘exclusive rights’ to images on platforms like DeviantArt since the early 2000s. It’s people like us who are late to the party.

Like nearly every living artist or designer with a physical body and material needs, I’m hungry for an alternative to the studio/gallery model of work, organization, and dissemination. I’m still trying to understand both the potential and the implication of NFTs. I typically make between $300 and $500 USD for a traditional commission, but my first NFT immediately sold for over $900 USD. What I earn today from NFTs remains passive income.

Somnath Bhatt: The work you do is so interdisciplinary: fashion, music, film, technology, writing… How would you describe your aesthetic? What would you consider to be some ideological underpinnings?

Suren: As much as I’d like to think I’ve meticulously fine-tuned my aesthetic over the last decade, in reality it has morphed and distorted into something totally out of my control. Similarly, I think half the fun of making, and creating, is not being totally sure of the direction I want to go in, but letting the process itself be a key collaborator.

This was a eureka moment for me—which I stumbled upon while studying Fine Art at Goldsmiths University). This obsession with the bare process has been my best friend ever since. This is particularly the case in my music practice, where I’ve delved further into the mechanics and properties of sound in recent years than ever before.

What are the creative processes of brainstorming, iterating and feedback like? What is the most challenging and rewarding aspect of the work you do?

Suren: I very much give into the moment and relish the unexpected. I have learned that encouraging happy accidents allows my work to go in directions I couldn’t have expected, and this is something I now fully embrace.

I’m challenged by the tech and tools at my disposal; I naturally wander towards obscure technologies and media formats, looking to exploit properties that were once part of their charm—be it the imperfect frailty of Compact Discs, or the strict algorithmic compression of MP3s—I’m all over it.

The most rewarding aspect is still the moment when someone connects with my work in some meaningful way. Even if it’s just one person, it’s very magical.

How would you convince others to join the NFT ecosystem without being hype oriented? What advice would you give to strategize a way forward? I remember you were one of the few people early on who sent me a lot of reading materials and resources.

Suren: It’s difficult to convey excitement without it sounding like hype! I think this is because for those of us who have already understood and fell in love with its potential, we know that it is a revolutionary new technology that empowers artists in an unprecedented way.

I’d encourage newcomers to disregard the sensationalist headlines, and read some of the introductory articles on the various marketplaces instead.