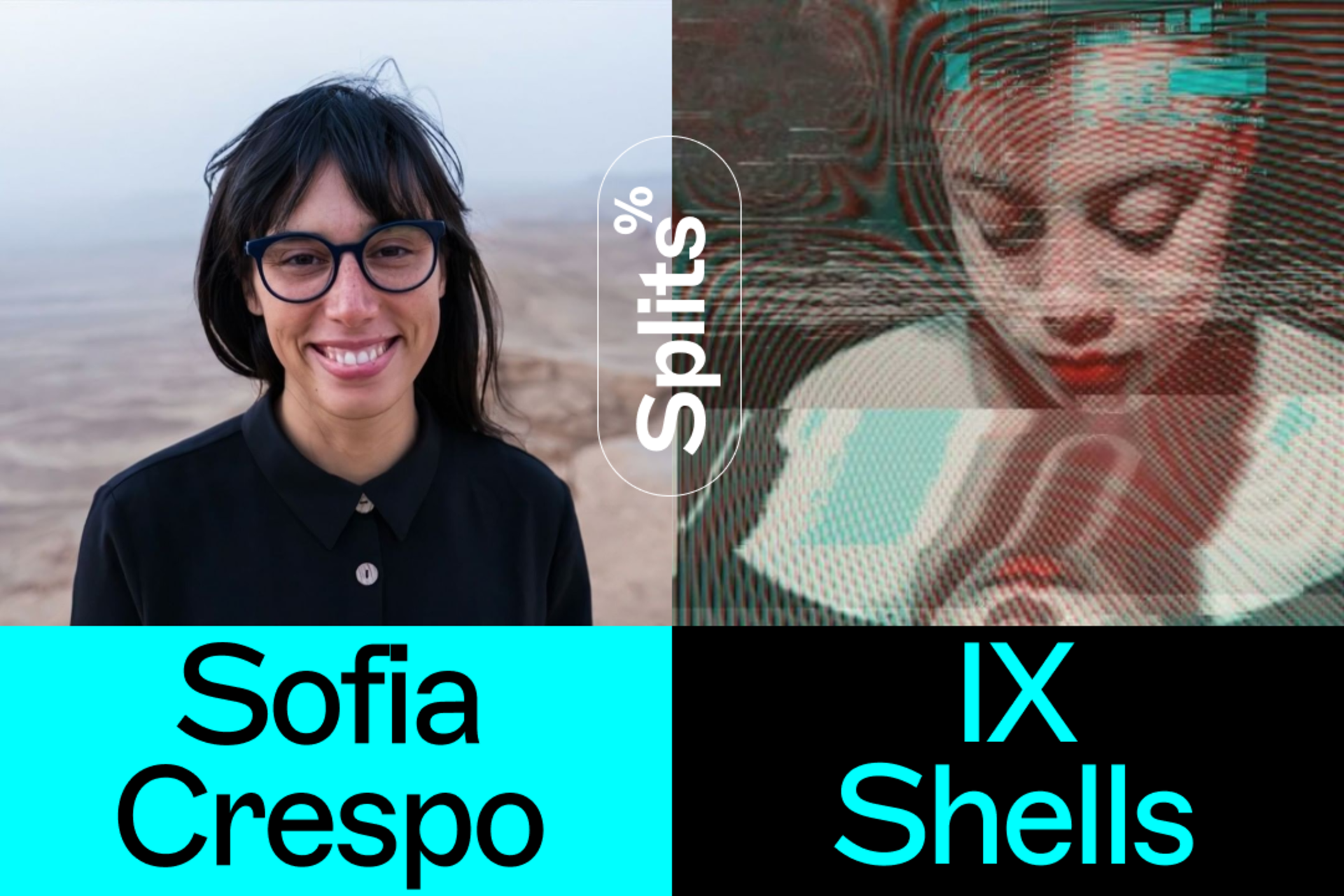 In this split interview, generative artist Itzel Yard (IX Shells) shares a dialogue with Sofia Crespo about patterns in nature, collaboration, and finding your artistic voice.

Sofia Crespo explores the biodiversity of the natural world by using neural networks and machine learning. Itzel Yard’s generative art practice draws from various influences, spanning Afro-Caribbean masks, Goethe's Theory of Colors, and reaction kinetics. They recently came together to debut their first-ever collaborative work, {Ruidos_emergentes}, which features a generative pattern imbued with cultural underpinnings. The work’s brilliant, pulsing color and light spawned from Itzel’s patterns, coupled with raw sound from a generative model trained on frog calls in areas of Panama, create a collective picture of their experiences.

In the following interview, Itzel speaks with Sofia about nostalgia, collaboration, and engaging with the natural world in her artistic practice.

Itzel Yard: How did you know you wanted to be an artist? Could you describe the moment when you just knew that this was what you’d do with your life?

Sofia Crespo: It started as a fascination with particular aesthetics and visual input. I originally studied art direction, which was a way of working through creativity. That eventually led me to explore different ways of expressing myself. Within commercial art direction, I didn't have much freedom. I suddenly found myself seeking a space where I could just talk about whatever I wanted to talk about, and make something that looked like whatever I wanted it to look like.It became more and more clear that the only space I was allowed to do that was the arts. It took some time to find my artistic voice—it wasn't something that appeared overnight. I took on several different alter egos because I felt more comfortable hiding behind a persona. Eventually, I decided to publish work under my own name. It was a big step for me to publicly recognize myself as an artist.

It’s interesting that you're doing this work to explore your creativity beyond data science, or beyond the more technical aspects of your career. What inspires you to create?

I'm fascinated by biology and biological systems. Beyond nature itself, I'm fascinated by how we, as humans, understand and study nature, and how we make sense of it: how we categorize species, how we try to make sense of how they evolve and adapt to the world. Another aspect is the medium which, for me, is digital. It's slowly becoming more physical as I collaborate with people who work in the physical realm. This algorithmic way of extracting patterns has also been inspiring. It’s something that you need neural networks for in particular, because they are pattern extraction engines. I find it extremely fascinating to be able to combine these worlds without having to do anything rigorously scientific. I love creating these patterns that appear to be alive to us, when they are happening in a realm where they aren't alive—or at least, don’t fit our definition of life.

Do you have any rituals when you start a new project? How do you maintain your balance?

I take time to disconnect from the computer. Through my work, I’m forced to spend a lot of time sitting in front of a computer running iterations. So it’s important for me to get rid of all digital devices and just go for a bike ride. I'm based in Berlin, so half an hour away by bike are places that are already more rural. Otherwise, I wouldn't say that I have a particular ritual. One thing I get to do from time to time is go diving.

I love diving because it requires focus—I have to be present with my breathing, so it’s a form of meditation. Our bodies aren’t built to be under water twenty meters below sea level. Being in that environment, and listening to the sounds, brings me to a space of vulnerability. It reminds me that I'm very lucky to be able to breathe. I wish I could live next to the ocean and could do that daily.

What are some key learnings you've made in your career today?

I think the most important thing I’ve learned has been to trust my own gut. I realized that I was often shutting myself down trying to accommodate something. I would try really hard to make art for a commission, for example. What I learned eventually is that I make art for a reason. The practice already involves the risk of not knowing whether I am going to make a living next month or not. If I'm living with that risk, I’d rather make art that I'm happy with. I’ve also learned not to be afraid to have a voice. Part of me still holds back very often, out of fear of public disapproval. But I had to learn to overcome that over time, through exposure. That's what being genuine is all about. Part of having a voice, or using one's own voice in an empowered way, is accepting that people might come and point something out, and they can write about it, and others can learn from it. I’ve learned that I really enjoy collaborations. I prefer working with others to working alone; I'm not so much the solo artist who just prefers to be in their studio. I know a lot of people prefer that, and I totally respect it. I’ve just learned that for me, it is better to work with others—to have that exchange is one of the most enriching things for me.

Why are collaborations and community important to you?

I definitely underestimated the importance of community when I first started making art. Throughout the years, it became more clear to me how much we exist as part of a much larger society. Having space for support, for being heard, for standing up for each other when the time comes—against some corporation, or what have you—all of these things are an extremely important part of what we do. Sharing one's own art involves a lot of vulnerability. It's a bit like ripping your own heart open, and you can really feel exposed. Within the industry there are so many different layers, emotionally and psychologically, where we need support. I make art both to be with people and to share it with others, and I believe that art and culture don't exist in a vacuum. By interpreting pieces and looking at them, we are making meaning, so art isn't a one-sided thing. Art is part of something that belongs to a collective.

Could you name some of the creators in the NFT space who inspire you, or that you’re excited about potentially collaborating with?

I feel extremely lucky that I had the chance to collaborate with you, Itzel! This was actually the first collaboration I've done where I’ve gotten to talk about something directly cultural—where the focus isn't on artificial life, but on texture. The texture itself stands as a symbol, and it was very enriching for me to have the chance to talk about representation in my work. That felt important to me as a Latino woman who has been an immigrant in Germany for so many years. Maybe it's not something we're talking about or addressing explicitly, but it became important to me to create space for that representation. It has been a beautiful process. And from the sonic perspective, it was really nice to connect with the sounds of the creatures of Panama—from the frogs, and how they call each other—and to train GAN models on them.

Could you mention a few of the other artists that inspire you in the NFT space?

In the NFT space, Helena Sarin has been someone who has really inspired me. I like that she cares about gender representation as well. Another artist that comes to mind is Cibelle Cavalli Bastos. There’s also Sabrina Ratte and Manolo Gamboa, whose work I really like a lot.

Considering our collaboration, {Ruidos_emergentes}, what do you think about creating artwork that connects you back to your roots? Is there a childhood memory from growing up in Argentina that you can connect to who you are now?

There was a time when I saw digital jellyfish in an aquarium, where they were doing a 3D projection. As a child, I saw that jellyfish being projected, and I thought that he was real. It scared me enough that I ran away, I became really scared of jellyfish. And that kind of really shaped the way that I relate, even today.Part of me is trying to understand these patterns in nature that I’m obsessed with. These patterns from our collaboration really show something—they don't look like a life form per se, but they have something in them that are really familiar to me.

{Ruidos_emergentes} has this nostalgia that my other works don't have, because it speaks to nature as it is. I think the emotion behind it is very different. 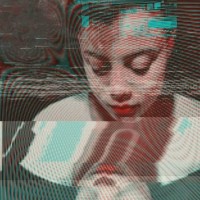