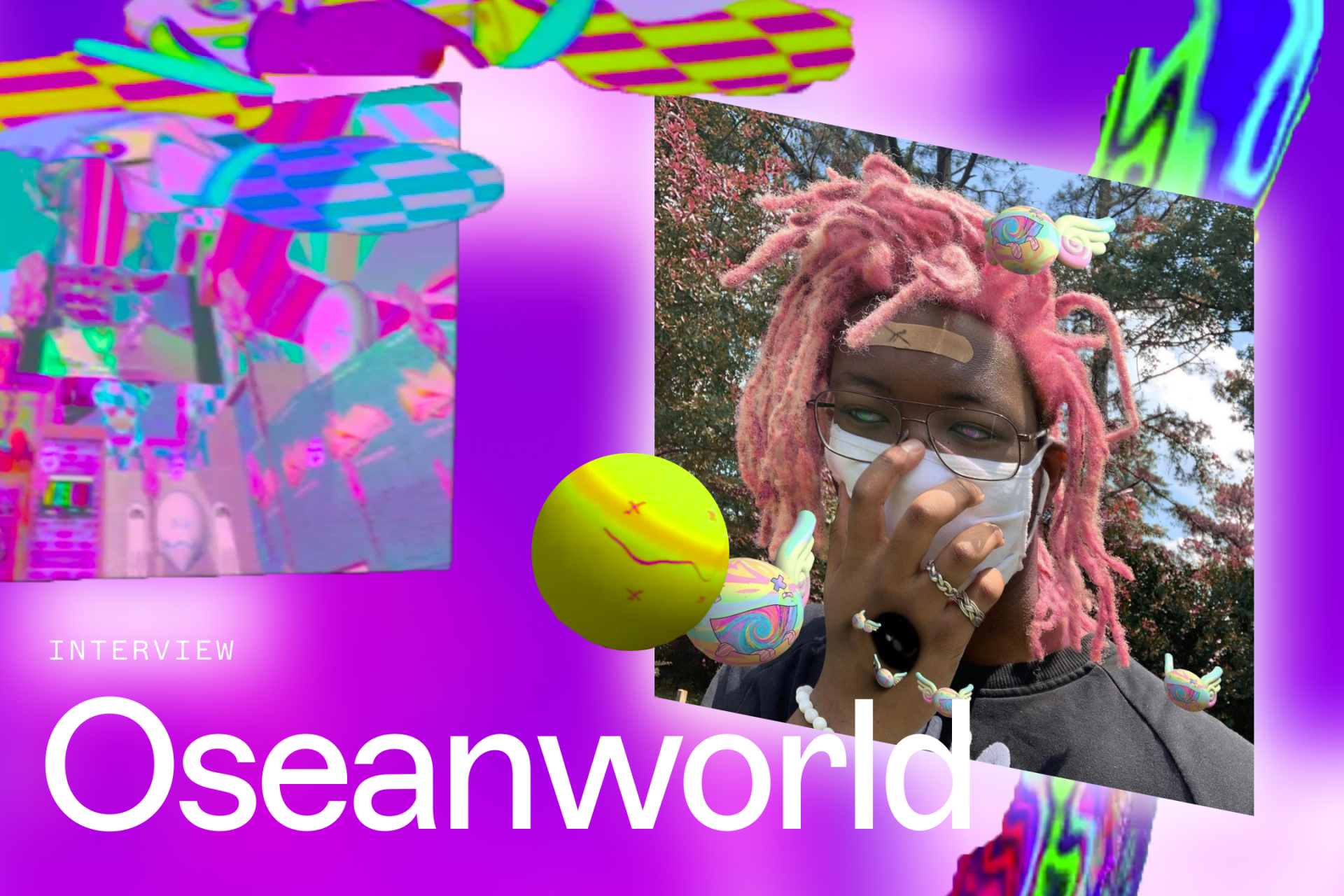 For the launch of 3D NFTs on Foundation, we plunge into the depths of Oseanworld’s multidimensional practice.

The kaleidoscopic realm of Oseanworld plays out in vivid colors, influenced by the cartoons, TV shows, and comic books that he immersed himself in as a child. Fast forward to the present, and he’s created a surreal universe of characters that represent many of the unique perspectives within his own personality. Built out of glitchy, explosive fragments where massive stuffed animals and grinning characters run rampant, Oseanworld is more than just a state-of-mind.

Taking a unique approach to VR and AR works, Oseanworld manifests a space suspended between dreams and reality. A self-taught artist in many respects, he found himself deep in the rabbithole of Cinema4D and online tutorials that allowed him to bend and shape his 3D creations. Before long, he was working with the likes of chart-topping musicians like Madeon, Offset, and Trippie Redd. We connected with Oseanworld about how he captures dream states, and why he thinks people who make weird art will be the next trendsetters.

What is Oseanworld and who are the characters in your universe?

When I first started making art, I would just draw comics in my sketchbooks and notepads. Oseanworld is an amalgamation of all of those ideas. Over the years, I've been building this gigantic universe to tell stories about the characters who represent all of the different versions of myself and personality.

In Oseanworld, Yameii is the hero character, my Mickey Mouse. Doom Doom is the music-focused character who has a lot of experimental, poppy, and cool things going on. Choice is very secretive and mysterious. To find Choice, you have to go on a scavenger hunt. I want people to be able to find the character in Oseanworld who they relate to the most on a personal level.

Oseanworld hits this intersection of Murakami and Superplastic influence, but housed inside of your brain. Experiencing your work feels like we're opening a little door and getting a glimpse of all the creativity, ideas, feelings that are being channeled into your characters.

As a kid, I really liked Disney Channel and Cartoon Network because they were central places where ideas collect and flourish. I’ve always dreamt of working for one of those companies so I could help to create theme parks, TV shows, and toys—I just want to play and be creatively free in the most imaginative ways possible.

If Oseanworld had a physical location, I would absolutely visit. In another interview, you’ve mentioned that dreams are the place in between VR and AR. What do you mean by that?

To me, real life and dreams are different realities. When you're experiencing waking life, everything's normal and solid, but in dreams, you can choose to wander into weird places. You can also have dreams that are grounded in reality where you lose control. VR is an in-between: you can choose to have a specific reality and let it get wild. It all comes down to choice.

You can choose different games, apps, and programs to experience the feeling of a cool dream. If I want to be on my computer in a completely customized way, I can be. VR coincides with your reality because you can see things in a grounded state, where you can understand it, versus in a dream where you can kind of remember things by writing them down quickly before you forget.

A lot of your work seems to be chasing that feeling of dreaming right before you wake up—that middle ground where the world is a little blurry.

I have so many dream journals. I write down the most intense parts of my dreams, right up until I wake up. I could be running away from a three-headed Godzilla in my dreams. In my videos, you see all of the crazy things happening at once, but suddenly, it completely shuts off because I “woke up.” I try to capture that feeling of wanting more, but not having more, because you can’t fall back asleep. There’s chaos, and then it’s immediately gone.

Most of my work comes from abstract dreams or life experiences. I'll go somewhere, see something, or just hang out with friends, and get a feeling that would be cool to recreate. If I also dream about that feeling, that’s how I know it’s a piece I need to make. I try to transcribe those feelings into art that's visually tangible.

I first interacted with you four years ago and it’s been really cool to watch you grow as an artist. I'm going to ask you a big picture question, but what do you want from the art world? What drives you?

In the art world, I want artists to be as big as they possibly can be. When I was first making music videos, I realized that artists don't get recognition or paid the way they expect to. You get to work with people you admire, but the artists themselves don't get that rock star status until they're dead, or burned out. Artists get really good to a point, but halfway through their careers, they’ll get cheated out of recognition because their work isn’t seen as valuable anymore. I want us to get to a point where visual artists can be recognized as much as famous musicians are, because in my opinion, our ideas are just cool. If visual artists had the same power, resources, and influence, I believe we could really change the world for the better.

The idea that we are low-key chasing immortality through our art or we want to take on client projects to make others look amazing have been driving forces in my artistic career too. Part of the magic of this moment is you're now being funded directly for your art. Has that changed your process in any way?

Up until recently, I had the mindset of making visuals because I needed money, and not because I wanted to. Now, I'm reaching a point where I’m starting to care less about all of that, and am able to make art for the sake of my own vision because of NFTs. I get to make art for myself and people still respect it. I feel like I’m taking a step up the ladder.

I completely agree. With NFTs, and in general, we’re seeing a huge shift in how digital art is valued and suddenly the playing field's been leveled. You're on Foundation and Sotheby’s, right alongside legacy blue-chip artists, and you're getting a well-deserved spotlight. Are you still taking on client projects or are you fully dedicated to building Oseanworld?

If I take on client work, it’s mostly for my friends. They aren’t necessarily clients—just me and the homies, playing around on computers. I can work on Oseanworld full time, and also make fun things for my friends. Now, it’s like we’re all just trying to make cooler art together. I think that’s also important, because other artists are also getting funded to make the work that they truly want to, which is going to lead to even greater art. We don't have to rush, or work within such short timelines anymore. We can really sit down and focus on what we want to make.

Passion projects no longer have to be shared on Instagram for likes that we don’t get paid for. You can create your passion project and it can actually mean something now because of NFTs—that’s so important.

We’re shifting away from the old model of sharing our art for free in exchange for visibility, and moving towards these new models of funding with NFTs. Our paths are changing, and I’m wondering, does that change the way you think about art?

I've always had this vision of wanting to make art to change people's perspectives and push culture forward. When people weren't into 3D, I was making 3D music videos. When people started making 3D art, I started to mess with After Effects and experiment with vertical videos. Now, I’ve gotten to a point where I don’t feel like I have to impress anyone. I can just make truly weird art to put out into the world. People who make weird art can actually be trendsetters.

Is there something you wish more people understood about your art?

Through my art, I am trying to share lessons with others. I do it in a way that’s like putting medicine in an apple, where you can experience the visuals, but after the visuals subside, the message is tucked inside. I definitely don’t want people to only ask questions they want answered. I want it to be your experience because you're coming in with your own ideas and intentions. I am just giving you a giant space to explore those ideas and expressions. I am giving you all of the things that you want, but only if you’re willing to find it.

That's really beautiful and leads me to the next question. Do you make work for yourself, the world, your younger self, or the future generations?

Literally all of them. I definitely make art for myself, and then I make it for everyone with the same intentions going into it. I want everybody to be able to come into it and find something they can relate to. That's the biggest thing to me. I know so many people that need help in life, and I want to be able to help everybody with whatever they have going on, through the visuals, stories, and messages that I create. 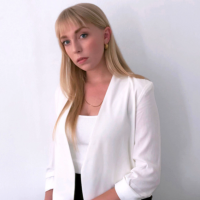