As NFTs become widely adopted, Auriea Harvey and bitforms are pioneering new transparent models between artists and the galleries they choose to represent them.
Published on
3 August 2021
Wrritten by
Eileen Isagon Skyers 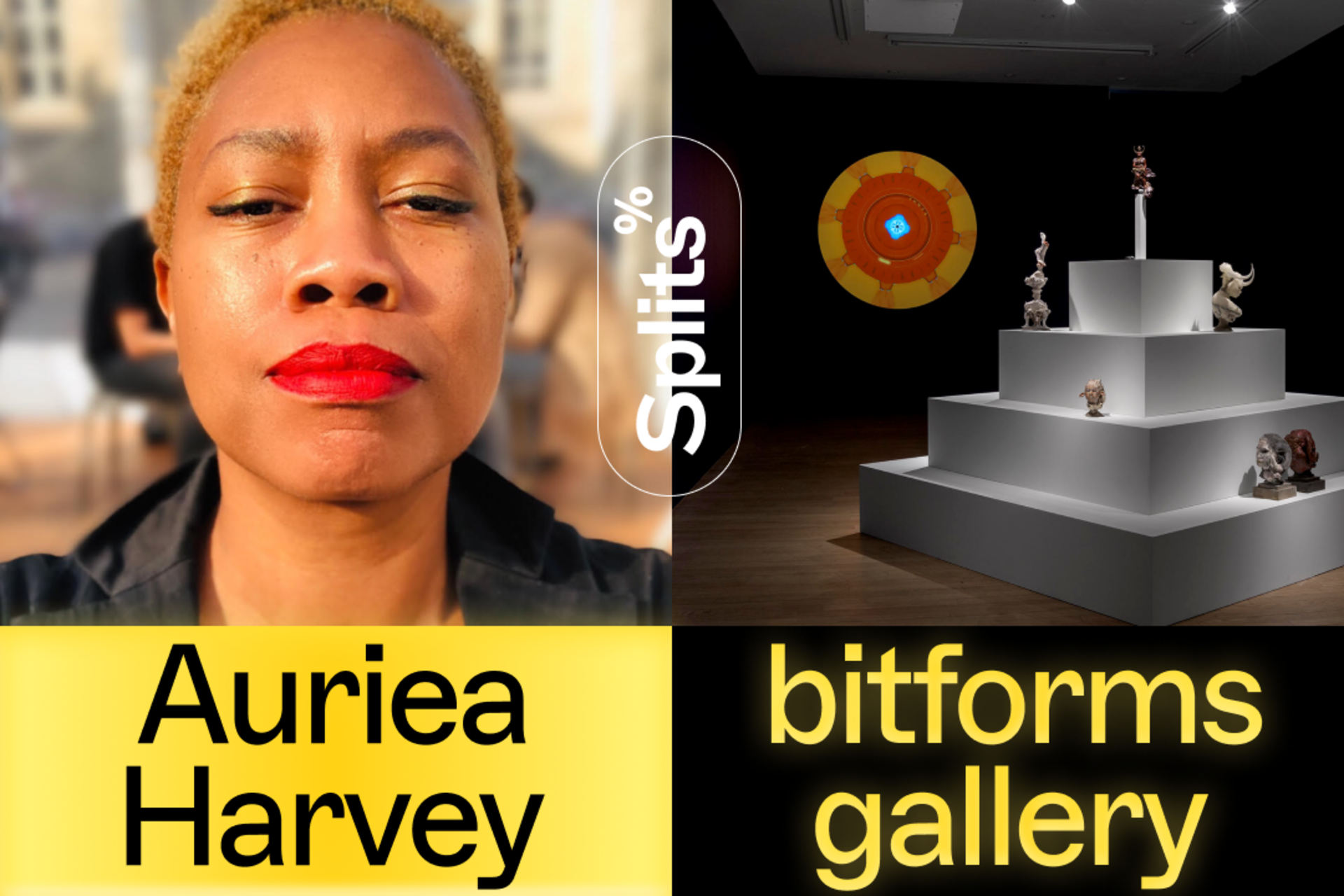 Since 2001, bitforms gallery has worked with artists who are engaging with new and emerging technologies. Before opening bitforms, founder Steven Sacks was the creative director for Digital Pulp, a web-centric agency that worked with programmers, artists, writers, and designers. Seeing the cross-pollination of multiple new media practices early on is what led to the creation of one of the preeminent and long-standing institutions for born-digital art.

Auriea Harvey is one of the many artists represented by bitforms whose history is firmly planted in the lineage of net art. On August 5, bitforms gallery will open an exhibition featuring physical works and a new series of 3D digital sculpture offered with NFTs—also viewable in AR—on Foundation.

With the physical exhibition and NFT auctions, we’re seeing the convergence of these two realms. We interviewed Auriea and Steven about the upcoming exhibition and how NFTs are being incorporated into their respective creative and business practices.

You have worked in various modes, from video games to sculpture, and you are now also deeply involved with AR, and NFTs. What inspired these shifts, and can you describe some of the nuances between them?

My goals as a 3D artist are always to have a dialogue about what it means to have this kind of practice, especially as platforms, like Foundation, seek to embrace 3D. Working in video games, of course, I was creating executable goals, you know—actual games—actual worlds that are explorable, which is a lot more sophisticated than what people are used to seeing with NFTs. Since I've been doing NFTs, I've been trying to ensure that my practice doesn't change because I'm involved in this kind of format, or with this or that medium. To me, it is a gateway to a larger understanding of what it is that AR and 3D artists do.

In my case, I'm a sculptor, if you want to put it simply. I feel that sculpture is a flexible, beautiful way of telling a story. So with each of my sculptures, I am trying to make people wonder about this object, or this character, or this thing that is depicted. I want them to tell that story in their own head, in their own way, and inspire thinking about the lines between reality and virtual reality, and between physical material and digital material.

Can you share a bit about the figures of mythology that you create in your sculptures?

When I was working with video games, I created a character called Minoriea, who is now my avatar. All of these works have their basis in metamorphosis, which stems from a famous story, a poem, about bodies changing shape and taking fantastic forms, beautiful and strange. I really related to that when I came to Rome in 2018. She was a character in a VR experience that I made called Minorinth. You met her in an abyss that was at the center of a labyrinth. She was the first character that I made a sculpture of. I took her out of this VR piece, and I created a bust of her in 2017—it was a magical moment of being able to finally touch these things that I had felt were so real.

Another character that I’ve minted as an NFT is called Fauna, and the piece that I'm saying is an allegory is called The Mystery. I've made several versions as NFTs, so this is number 4. They are more meditative pieces, or subjects—the mystery being love and death, I suppose, symbolically.  So some of these digital versions are quite intense.

Can you describe your process for creating your 3D subjects in the round? What is it like to see them come to life, so to speak, in AR or 3D printed sculpture?

It usually gets to a certain point where I want to know: what is this like when it's in the real world? Of course, when you're on the computer, you don't have to worry about the laws of physics, or certain engineering concepts like: is this going to stand up? Or, how exactly does gravity affect the situation? So that’s when I print it out. Those pieces start to create a chain of ideas around materiality. The digital version always has this purity for me—it can become more intricate, or it can become more simple. I can take that object and put it in the world or into an environment.

To that end, what role does three-dimensionality play for you, does it work towards preservation?

I definitely don’t make digital work for preservation, because technology moves too fast. I would say that the sculpture is definitely the thing that I make with an eye towards preservation (I've just been in this game too long to think that the digital is forever).

AR is more of a way of relating the digital sculpture to my body in the same way that I would relate to a physical sculpture. The primary way we enjoy sculpture is by standing next to it— by feeling the presence of this object as we observe it and we reflect upon it with our bodies. So in order to do that with the digital, you have to give into this illusion, if you suspend your disbelief, you can give it this feeling that it's there with you.

Would you consider yourself, or your work, optimistic or pessimistic about the present technological moment?

I would say my work looks optimistic, or at least some of it looks optimistic. Some of it has a darker edge to it, specifically, some of the mysteries, or goddess figures, or power figures. I would hope that they're neither optimistic or pessimistic, but that they invite you to consider that for yourself.

I am techno-agnostic because I've been involved with tech for so long. It moves too fast. I've held onto the polygons for twenty years or so now. The blockchain makes me feel optimistic that I can make whatever I want to make, and find a way to make my practice sustainable.

After decades of selling new media art, do you feel optimistic about the entrance of NFTs as a certificate of ownership for digital objects?

The NFT movement has been the most disruptive moment that the gallery has experienced since we opened. My feelings are mixed. The fact that millions of people have a newfound appreciation for digitally native work is encouraging, but the file size/format limitations of the platforms and the vast amount of work being presented without context is an issue for me. Another major concern is the presentation and emotional connection to the NFT based works vs. a purchase purely as an asset driven acquisition.

Tell us about the works being exhibited by Auriea at the bitforms gallery—there are three physical sculptures and three NFTs.

As mentioned, presentation is essential to the art viewing experience. Artist and gallery collaborate on what makes sense for the work in terms of scale, form and placement in a space. In many cases the presentation can be as important as the final art itself. In some cases the works are sold as “unframed” pieces which offers more flexibility in how the works can be experienced. Thus, for the bitforms gallery and Foundation exhibit we are presenting three distinct viewing experiences. The first is a large touch screen, which will further the interactive aspect of the work. The touch of the screen will allow the viewer to gain more insight into the movement and manipulation of Auriea’s 3D objects. We also have a large 4K projection with a square format. This is a more immersive, larger than life viewing of the work. Projection can be scaled up or down easily. Home install can be easy, although there must be consideration of light levels. Projection allows for scale options and more elegant architectural integration. The third piece will be presented on a leaning 4K 85” vertical screen. Going vertical offsets the “TV” feeling and also can be scaled to accommodate space needs.

How do you think that the IRL/URL aspect of exhibiting NFTs and digital objects will evolve over time?

It always depends on the artwork. In some cases URL exhibiting is fine, and can even benefit a work since many more can experience and share. We are strong believers in IRL exhibitions. Curated presentations evaluate scale, environment, audio and offer the viewer deeper insights and emotional connection to the artworks. It’s also important to have face to face with people educated about the work, ask questions and feel the energy of others in the space. We see the merger of IRL/URL expanding with more experimentation and thoughtfulness.

The challenges of preservation vary per artwork and play a major role in the production, documentation and sales of media art. Computational/generative works are typically the most complex and have consistent issues with migration of hardware for playback and presentation. These issues are managed but never fully resolved. We do our best by offering comprehensive guides and contracts that define the artwork and the role of the collector. The speed at which hardware changes has been the biggest challenge. 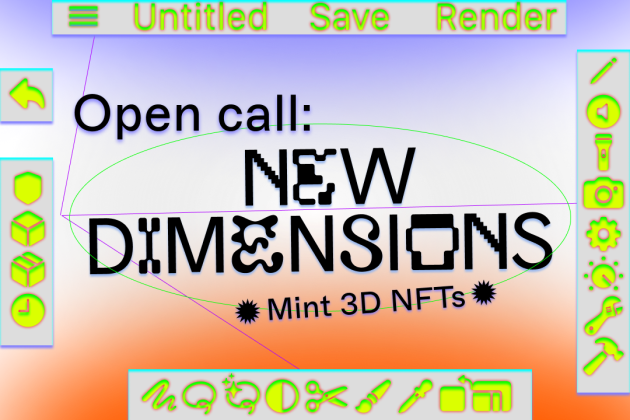 NEW DIMENSIONS for a new world

Announcing an open call to play with the possibilities of 3D NFTs, and help shape the emerging metaverse. 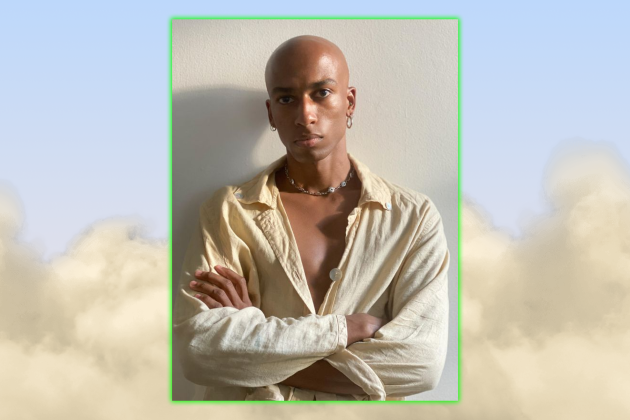 Welcome to the sexy, destructive world inhabited by a series of fantastical characters created by Tyler Givens. 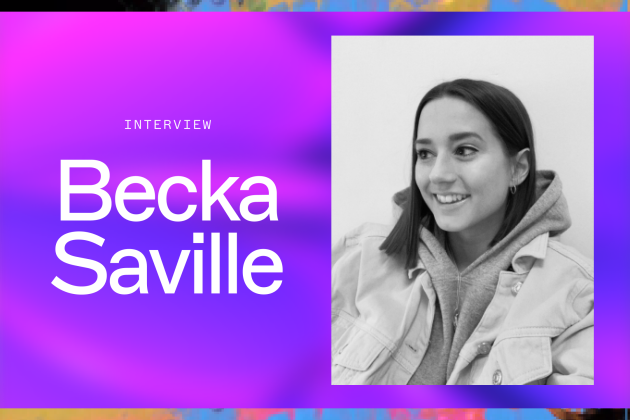 Through art, Becka Saville is capturing recalled memories and flashbacks as visual explosions of fluid movements.