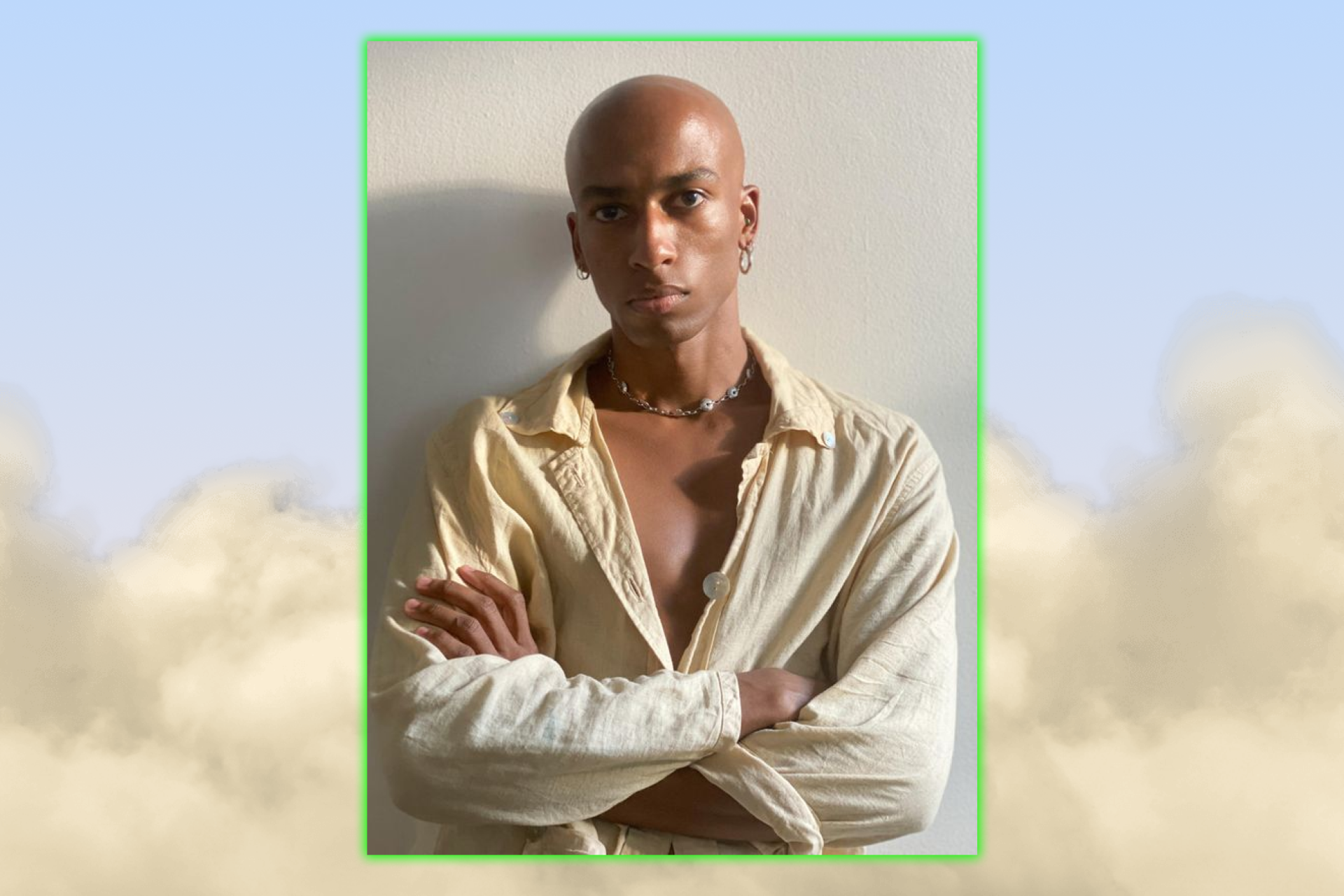 Welcome to the sexy, destructive world inhabited by a series of fantastical characters created by Tyler Givens.

Tyler Givens makes fantasy, flamboyant, and existentialism, camp. In the worlds he creates, escapism isn’t used for dystopic ends, but as a means towards liberation. Working with ink, oil paints, and 3D software, he draws queer Black figures and places them at the forefront of extravagant adventures, creating a future where blackness is visibly exuberant and celebrated.

Tyler takes his characters on otherworldly journeys—they fight dragons and alien species by living out tropes of melodramatic romance, heartbreak, and drama. In his works, each character is confronted with a high stakes choice: Slay the dragon or tame it? Save the planet or let humans die for the greater good of the universe? Though untethered from reality, Tyler uses fantasy as a tool to bring clarity to the larger questions in life. We sat down with Tyler to learn more about where his creative impulses come from and where he wants to go next.

The first time I came across your work was through The Digital Diaspora exhibition that Diana Sinclair curated in June. There was such a powerful energy to that show, and I really enjoyed getting to know your process and practice better since then. What has your experience been like since that exhibition?

There are a lot more people seeing and interacting with my work, and also reaching out to thank me for creating it. They have an intuitive understanding of the pieces without me having to explain myself, which feels nice. I like seeing how my drawings affect people. Since that exhibition, specifically, I feel aligned and on my path. I’m not going to go back to my day job, I’m going to keep making art. I’m going to make everything happen. It’s all been really exciting.

I'm so happy to hear that. For people who are just getting to know you, how would you describe the world that your work inhabits?

It’s a lot of sex and destruction, but the destruction isn’t necessarily a negative thing—it could be something used for the greater good. Much of the fantasy draws from my upbringing in the church and wanting to dismantle these fundamental extremes of “good” and “evil.” At this point in my life, I don’t believe that anything or anyone is good or bad; I think we all make the best decisions we can based on our given circumstances. I explore those ideas a lot in my work.

Also, I'm gay and Black, and I want to celebrate my queerness and deconstruct gender norms, in support of my own self-exploration. A lot of healing has happened through the process of creating art. For example, when I started drawing I was working at a job I really disliked and a lot of my drawings came from a dark place. I felt like the job was sucking the soul out of my body and I was becoming an angry person. We all have our own shit, but then to add in an environment like that was a lot—and then making art helped me through it. As I started to get more into painting and digital work through NFTs, I got a lot happier. The pandemic helped me reset, focus, and realize that I want to make art full-time. It came with financial sacrifice being here in New York City, but I'm so much happier. Now I feel like there's a lot of joy that's coming into my work, a layer of it under the sex and destruction, and all of that. There's some humor and joy, I think, more and more and more.

When did you realize that you were an artist? How did you find your artistic voice, and what was that process like?

My uncle played a really big role in introducing me to various mediums. He would give me a pad with colored pencils, cheap watercolor sets, whatever. I had everything. And then he would come over, and we’d draw superheroes together. Later on in school, I was always taking things to the next level art-wise, whether that meant making a giant house out of popsicle sticks or incorporating textiles that my dad had left around the house. I was always excited whenever we got an art assignment because I was like, okay, now I can make something really cool.

It’s funny because a few years ago I went home for Christmas and was digging through school projects in the garage and found something I made in fifth grade. It was a brown, oval foam thing with a green-eye, a yellow eye, a white beret, and a white turtleneck. Just underneath it, the caption said: “What do you want to be when you grow up?” and I wrote: “Little Artist Money Boy.” I wrote that when I was 10 years old, which means I always knew this would be my life.

How have materials evolved for you over the last couple of years? What kind of materials are you drawn to lately?

When I was growing up, I used markers, crayons, and easy stuff. I got into more technical tools later on, especially once I came across a book on Maya, industry standard 3D software. At the internship I had, they would put me at a computer station, and I was like, okay, “I don't know what any of this means.” But I was really intrigued. I stumbled through it, just trying out different things. So much of it went over my head.

I got into fashion photography in high school and would pick up characters like the Hunchback of Notre Dame for instance, and create self portraits around that theme. Or take the story of Narcissus, grab my Urban Outfitters clothes to go to my local state park, and lie in the dead leaves and shoot from one position on a tripod, and then change my outfit to play the mirror version of myself and shoot the other side, and composite it later in Photoshop. When I studied photography at NYU, I kind of had a fuck-you moment with that medium and began exploring video and other interactive screen-based mediums—though, without any real guidance from my professors, which maybe was a blessing in the end.

My approach has been all about experimenting and learning what I like. I like everything, but I've also learned over the course of the last... I mean, until now, that sometimes it's better to just get a basic grasp on something so that when you communicate with a collaborator, you can have a better way of explaining what you want than trying to learn a new software from A to Z.

What is the story that you're trying to tell with your pieces? Are there through lines or patterns that you've noticed across them?

I've noticed that my characters are always in precarious situations, falling into a pit of swords or like climbing out of a pit of fire. When I look at many of my pieces, I can also see that the character is about to make a choice—and this is a snapshot that makes you wonder where they were before, and where they’re headed next. For myself, I only want to answer where they are now. I appreciate when viewers or collectors come up with their own stories for the characters. I like to embrace the idea of choice, and framing choices as being very extreme.

Do you have certain rituals when you're sitting down to create a new piece, or habits that help you get into the creative headspace?

In terms of rituals, I tend to sit down at my desk with all of my drawing tools, play music, and bring that into the paper. I usually start by drawing the character’s limbs and see where my hand goes. I make a lot of mistakes, or what I initially consider to be a mistake, and then I'll go from there.

Can you describe the piece you’re releasing on Foundation?

The piece is called “003: The Sisters,” but it’s secondary title is “Do you know? Do you know? Do you really, really know?” The characters exist in a screenplay I wrote at the beginning of the year, which is an apocalypse. They’re inspired by a character duo, The Shadow Girls, from my favorite anime, Revolutionary Girl: Utena, who frequently pose those questions to the viewer.

The show is about this girl, Utena, who buries herself with her parents after they die until she's rescued by a prince who gives her this ring with a rose seal on it. From that moment on, she decides that she wants to be a prince as well, and winds up at this school where she finds herself entangled in sword duels to win the hand of The Rose Bride and thus possess the power to revolutionize the world. It’s wild.

Within each episode the The Shadow Girls appear behind a curtain, like puppets, and tell stories that have seemingly nothing to do with the plot. They're just random, like, talking about anything from pirates to undercooked rice. But they're always asking things like, "Do you know, do you know, do you really, really know?" or “Have you heard?” And if you analyze what they’re discussing you begin to see how it correlates to the plot of each episode - very much like a Greek chorus.

Anyway, throughout the screenplay I wrote, The Sisters function as the Greek chorus through a series of intermissions intercut with the main plot of the film. They have their own plot completely separate from our protagonists, though they exist in the same world. Because this piece is so based on a screenplay, I’ve injected a lot of motifs that exist within that story.

For instance, The Sisters are all chained to each other, which speaks to the fact that we’re kind of imprisoned to the circumstances we’re born into and who we come into the world with: our families, their ideals, and so many pre-existing obstacles that we can’t fully detach ourselves from. From the outside, the sisters hang locks that have happy and sad faces etched into either one, which speaks to how we frequently become slaves to our own emotions and patterns. I believe that how we react to our circumstances is just a byproduct of how we were brought up.

At the same time, The Sisters form the shape of a heart, holding hands at the bottom, a friendly gesture, but disconnected at the top. This speaks to both platonic, romantic, and familial bonds that are tested and broken throughout the film.

The clocks that anchor the balloons are broken. They start jumbled until finally spelling out "END OF TIME.” In the screenplay, the characters’ perception of time is almost non-existent and irrelevant until the characters realize then accept that the world is about to end. What they do with that information leads to chaos.

It’s camp, sexy, destructive, humorous and of course full of fantasy and drama. It’s as though I’ve brought every character I’ve created to life and thrown them all into one live action film. I’m really excited to get this film made some time in the next decade—if our physical world is still around. Until then, I’ll keep going full throttle in making the rest of my fantasies a reality.