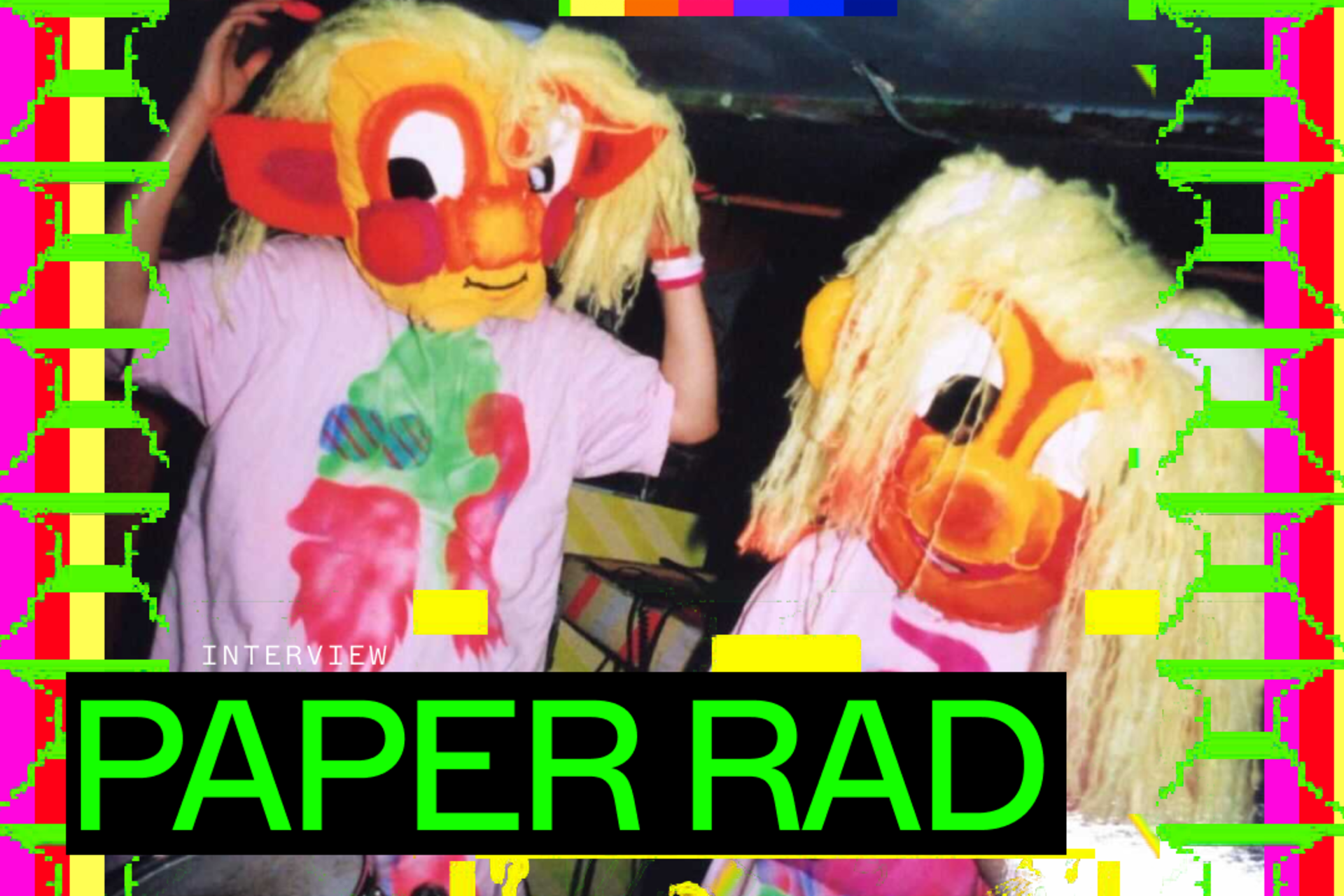 Paper Rad on setting the precedent for Internet culture.

We talk to the art collective at the nexus between contemporary art, internet culture, and underground music.

Just after Y2K, from about 2001–2008, the work of Paper Rad was engulfing every conceivable underground space in a blaze of neon. The East Coast art collective’s ecstatic rainbow-hued color palette made as much sense on the walls of a Manhattan gallery as it did popping out of a computer monitor, printed in a tiny zine, or projected precariously onto the side of a warehouse in the middle of a noise show–which is to say, all the sense in the world and absolutely no sense at all.

Paper Rad fed the tropes of 1980s and 1990s pop culture through their proprietary aesthetic shredder and spit them back out to a generation of kids hungry for something new. In the process, they changed culture—both on the internet and in real life. Before Vaporwave, before Pepe, and before everything else quintessentially internet, there was Paper Rad.

A Paper Rad animated gif has the power to transport the viewer to a different time and place in internet culture. In that respect, it is an important archival document of a moment where-old guard countercultural movements—zines and noise music, for example—were rubbing up against new technology and reshaping culture in the process. As they prepare to make their debut on Foundation, we talked to Paper Rad member Jacob Ciocci to learn about their influences and aspirations from 20 years ago, to now and into the future.

Paper Rad existed at the nexus of multiple cultural flashpoints. When you started the collective, how focused were your goals? Outside of the core East Coast underground you came up in, were there any communities that you intentionally aimed to interface with from the start?

From the outset, our goals were very optimistic and utopian: we wanted to move all of our friends out of cities, and go somewhere remote and cheap, so that we could build dome houses with DSL connections. We wanted to make as much awesome stuff as possible, in every imaginable medium. Fort Thunder was a DIY space from Providence that we were most inspired by at the time—it perfectly melded music, art, fashion, architecture, and daily life into one Gesamtkunstwerk. The space was in the process of getting torn down and turned into a strip mall, so our 23-year-old minds thought we needed to build our own version of utopia somewhere else. A perfect storm of underground scenes that sometimes overlapped actually inspired Paper Rad: noise music, underground comics (Fort Thunder, Canadian Psychedelia), early net art (jodi.org and mumbleboy), video game hacking/obsolete tech (Beige Collective), and found-footage video art (Animal Charm, Negativeland). Looking at all of these influences now, it strikes me that they were all the “niche” genres of art that didn’t fit into the current gallery scene. We were inspired by every form of art that was hard to monetize.

Our big breakthrough was realizing that cartoon characters were something that could exist in every single one of these mediums. So cartoons and characters became the glue to everything we did. We grew up with these franchises that crossed every possible medium—like Garfield, He-man, or Dungeons and Dragons—but were then taught in art school to focus on becoming a “master” of one medium, and to avoid having that medium interface with popular culture. So we did the opposite.

I’m curious about any difficulties you encountered as you attempted to navigate all these different systems–contemporary art, internet culture, publishing, underground music. What contexts were you the most or least comfortable in?

I think we were most comfortable and excited by working with our friends, or by reaching out to collaborate with people we were inspired by—this patchwork of people on the margins of many different mediums. One of my fondest memories of that era was when Barry McGee invited us to do a two-week residency outside of San Francisco. Barry was my favorite artist growing up, partly because I saw how he managed to work within various cultural spaces without it feeling cheesy, or forced, or “wrong.” I realized later many of my influences are like this: people who exist in between mediums to the point that they really can’t be defined by any one thing. Is it high art or is it just a cartoon? Is it a joke or is it serious?

From the beginning, we knew we didn’t want to be defined by any one genre, or scene, or even profession. So we would make a book and then immediately work on a DVD, and then switch to working on music. In one of our earliest “company meetings” I remember Ben saying, “I think we should make a Paper Rad website, then a book, then a TV show, then a movie, and then a theme park,” or something like that. The biggest difficulties we encountered were very predictable, looking back on it: how to maintain our love for one another and ourselves while simultaneously learning how to become adults.

Did you ever feel like the collective was spread too thin? Were there certain goals or dreams that were never realized because there simply was not enough time or resources? You were all doing so many different things in so many different directions—it was amazing to me that it always felt like it was part of a coherent larger vision.

We had endless goals and dreams that were never realized. Anywhere from the aforementioned DSL domes, to theme parks, to just zines or animations that only got half-way done. For this NFT project, I have been going through all the old hard drives, finding many unfinished projects that are blowing my mind. There’s a lot of unrealized potential and stuff I know people would love to see or hear somehow. I think magically, as soon as we started to feel spread too thin, the collective ended. Which is a blessing actually—because it means none of the work we made as a collective is bad. All of it is good. This was not because we had a “company meeting” and decided that the work was suffering. It just happened to coincide with all of these big decisions or changes that were happening. Ben and Jessica split up, Ben moved to LA, and I started teaching full-time.

I continue to detect Paper Rad’s influence on internet culture, in both major and minor ways. How have you seen internet-based or internet-aware art and culture develop since the dissolution of the collective? Do you think of doing an NFT as a more formal way to solidify your legacy within this space?

Paper Rad is working with NFTs as a way to historicize what we did for a younger generation of artists that may not know how long people have been working digitally across so many different mediums. This is the 20th anniversary of our website, so it makes sense to archive much of the ephemeral digital work we did from that era. Some of our video pieces are in museum collections, or distributed by Electronic Arts Intermix. Rhizome at the New Museum has archived our website as it existed in 2008, but there are so many other digital projects that have fallen through the cracks, and some of them—dare I say—are “masterpieces.”

So much of what made Paper Rad unique as a collective now simply feels like the status quo for young creative people: using the internet as the primary space to research and cultivate one’s personal aesthetic, seamlessly switching between various digital mediums and platforms, effortlessly jumping from video, to music, to fashion, to the art world—all the while maintaining a clear and evocative “brand identity.” We did all of those things before social media, in the most absurd and silly way possible. We would reverse-shoplift our CD-R’s into the collections of hipster record stores. We made hand-silkscreened 4-color business cards that were impossible to read and handed them out at the art fairs. We went on a DIY music tour to promote our fancy art book, but only played cardboard instruments. Somehow this all worked. It didn’t feel cheesy or forced or wrong, just like we learned from Barry. 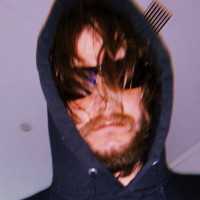