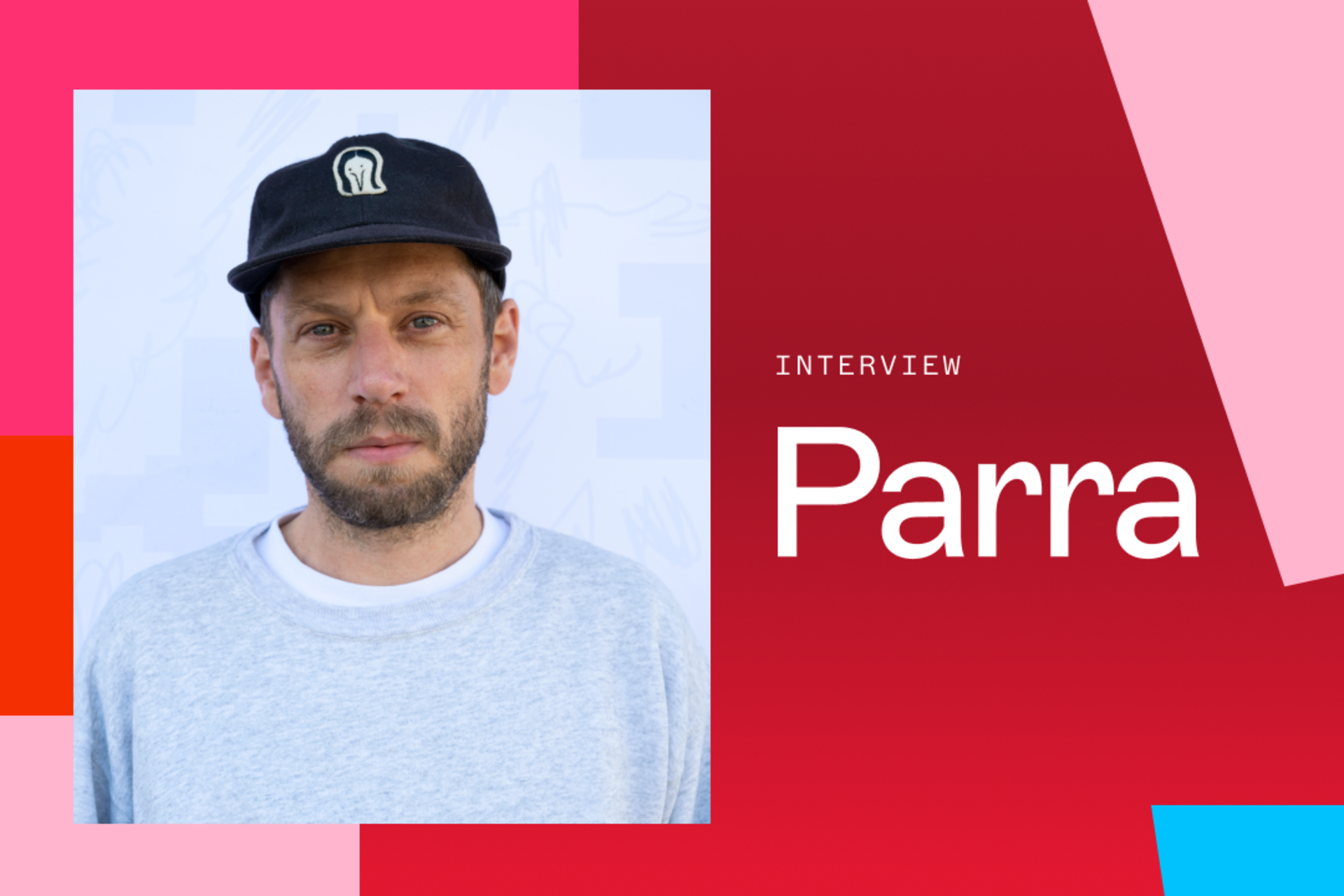 The man behind the method shares his take on skating and creating outside the lines.

Whether you’re into clothing, design, sculpture, animation, or skating, you’ve likely heard Parra’s name before, and could recognize his work for its bold color and tasteful yet psychedelic vibe. Parra, a Dutch 40-something-year-old, has spent a long time interlinking creative worlds, and he’s now well known for his work’s hand-drawn sensitivity, which makes everything he creates feel like an illustrated novel that’s been dressed up.

Beyond his art, Parra has started brands like By Parra, Tired, and Rockwell (RIP), and he’s created dozens of massive installations in his comically foreboding yet romantic signature style.

These days, even more excitement is bubbling up around the Amsterdam-based polymath. The Olympic skateboarding uniforms he designed for Nike, and his latest shoe collaboration with Nike SB will be released this month. Plus, he’s launching his first NFT, groundhog drinks, on Foundation. In this brand-new work, his go-to palette of blues and reds is complimented by a sweetly rocking soundtrack that he wrote and performed, and a demure sense of humor. Blurring the line between painting and animation, Parra’s debut NFT features a woman perpetually falling through her table, lending the piece a distinctly sisyphean undertone.

Parra is not often interviewed, so we were thrilled to have the chance to sit down with him and get to know the mind behind the method.

This may be your first NFT, but you’ve had a long career. Where are you at in your creative journey?

I was an unschooled, aspiring graphic designer so I didn’t know the rules. I started to hand draw my work, which was at that time mostly flyers and posters. For some reason my simple style caught on and I built from there. I’m still developing and learning every day.

Your NFT groundhog drinks is beautiful. I love the cyclical depth, and how it's like, “Oh, this is fun and has flashy color, but it's not all roses here.” How did you approach creating your first NFT?

There's always a little anxiety inside my work, and some minor keys, you know?

With this piece, I wanted to achieve that moment when time stops. If you pause the work, or just grab any screen, it's a painting. Live photos or GIFs have the same effect. This is a painting, but with some extra information—it’s like a live photo of a painting. So that's the plan for my future NFT work: to make paintings come to life in as silly and as animated a way as possible.

Obviously, NFTs and Foundation as a platform are both pretty slick. You know what I mean? It's still somewhat messy and random in content, which I love, but it's also curated, and it's very exciting. I assume that there'll be more platforms that are going to curate the NFT space even more heavily, and that will try to sneak in more control. But I don't think that's what's supposed to happen. The best part about this space is that everyone's just trying it out, and seeing how it goes. The most important thing is that we don't want to be deciding what is right or wrong.

How do you work these days?

I work alone. I do all the drawing, all the socials, everything. Sometimes I think, “Where do I go from here?” Because I’ve made it pretty difficult for myself. But there’s something about it that I really love.

With my work, I want it to look good, but I’m also chasing that attitude from back when I was like like, "Ah, fuck it." Just that DIY quickness and dirtiness… which is a culture the internet had and still has, and which I'm really attracted to.

For the NFT I made, that was created by me just drawing it on paper and then animating it in Photoshop—which is the worst place to animate because it's not fluid. It's terrible. I don't even know why they have the option there. But still, that's what I think attracts me to that way of working. The criticism I received in the late 90s and early 2000s for my flyers was like, "What font is that?" I had no idea what I was doing. But still, it caught on for some weird reason. I'm like, "Oh, that's fun." Just like skateboarding, when a curb's not meant to skated on—I think that do-it-anyway mentality always stuck with me. It’s about skating outside the lines, or something.

What’s it like to do so much of your work outside in public—from your murals and sculptures to skateboarding?

My favorite outdoor work is this big anxious bunny in a park. At first, people didn’t like it. I didn't get a permit for it, and the neighborhood was against it. At first they were like, “It's a big scared bunny,what does that even mean?” But then for some reason public opinion turned around, and everyone was like, “We love it. It's great. It should stay.” Now it's permanently there. So that felt like a big victory.

For me, the greatest aspect of that bunny work isn’t all the people taking photos with it, but the fact that somebody wrote the suicide helpline on it. Seeing graffiti of the suicide helpline’s phone number on the anxious rabbit—that moment is exactly why I'm doing work outside. Because once it’s out there, it's not yours anymore. It's for the people. And you can’t think that everybody's gonna like it, you know? It’s the same thing as online. So when I put an animation on Foundation, it’s scary. But that's why I like the NFT thing. There are no works in progress—you finish something, and then you put it on the blockchain. And then you literally can't get rid of it.

It’s interesting to make something physical for a sports event, where more people may experience the uniforms digitally than in person. How did you approach designing for the Olympics?

The first thing was for me to actually make a uniform. I'm deep into road cycling in France, so I did a club cycling kit a couple of years ago. When I made it I thought, “I have X many people who buy my stuff. Of those people, there are only a few who cycle. And then it’s an even smaller number of people who like loud-colored cycling gear. So yeah… that leaves me with five to ten potential customers.” But then the response was amazing. I liked that experience because I got to go into a new area where the people who like my work aren’t, usually. It’s a way to explore a new group of people.

Once I make the design, there are a million people who make the uniforms. It turns into this machine. And I'm neurotic like, “How are they going to even sell that? People are going to hate it.” I got so much anxiety because skateboarding and the Olympics are not a great marriage, you know, but it's necessary to have these uniforms. So I thought, “Man, if I don't do it, someone else will. I might as well do it.”

So we kind of figured it out like, “Okay, there's not one right uniform, but there are six things you can move around your uniform. This is how paranoid skaters are, including myself—which is also my name, Parra, for paranoid. At this point, only one person is wearing the combos I planned for the design. That’s how deep I buried myself. But that's how I like to work.

Working for the Olympics by nature is patriotic. To take that idea a step further, how would you describe the imaginary nation of Parra?

It's a pretty simple answer. It would have a minimal color palette, with many shapes that fall in between the abstract and figurative. There's not a word for that in-between kind of shape, but I know something is there. Can we make up a word for that? Because I like to hang in the middle, I can still see what the shape is, but it's also unclear. That way, it doesn't annoy me if I look at it every day. So that would be my flag, four wavy colors—always organic, never straight lines. 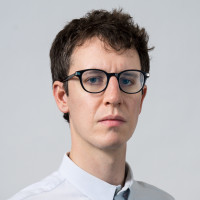