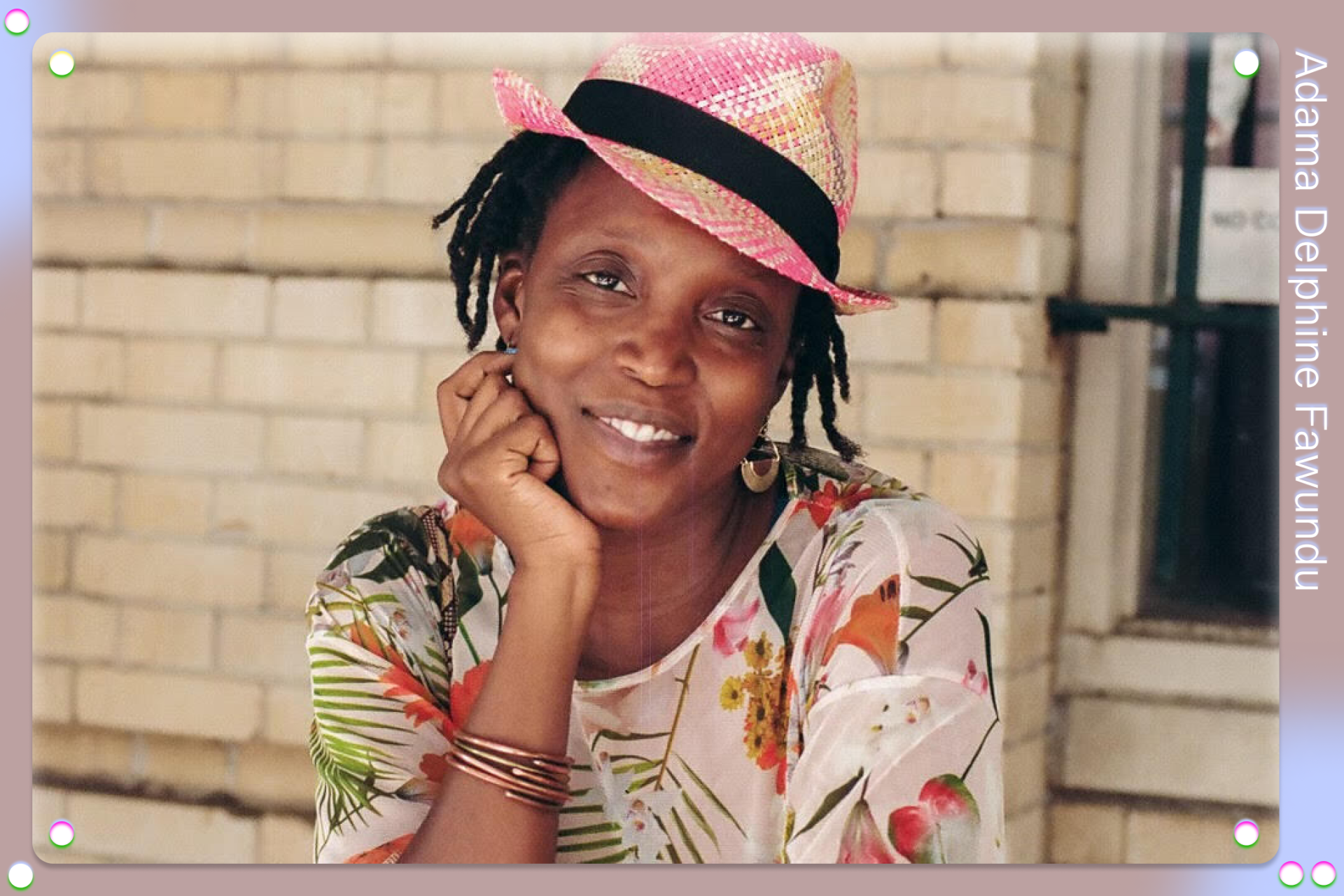 Adama Delphine Fawundu on weaving the past with the present.

The multimedia artist explores heritage, identity, and indigenous knowledge through a deeply immersive and spiritual practice.

Adama Delphine’s work continues a long-standing tradition of making art with ancestral materials, archives, and visions. By visiting sacred sites and placing her own body into the space as a sort of performance, Delphine builds and deepens familial connections while simultaneously creating the photographs and videos that form the raw material for her creations. Using digital collage and animation techniques, she adds dynamic movement and multi-dimensionality to her NFTs in order to imbue them with an immersive, otherworldly quality that is completely captivating.

With a series of NFTs on Foundation and a solo exhibition opening at Princeton University, Adama Delphine is expertly weaving together her ancestral past with the exciting possibilities of the present. To learn more, we spoke with Adama Delphine to ask how she uses her work to open up new ways of interpreting her heritage, how she’s evolving her practice into the NFT space, and what she’s planning to experiment with next.

Over the last year you produced a series of NFTs on Foundation, participated in a crypto residency with ONE / OFF, and opened an exhibition at Princeton University. How have these projects built on each other?

My creative practice involves two main parts: collecting video footage from different parts of the globe, and making photographs of myself. When I photograph myself, it’s very performative, like I'm documenting a deity traveling around the world. Then it becomes about merging those two approaches, while bringing in the African diaspora as an expansive concept.

Since around 2014, I’ve been digging into my Mende heritage from Sierra Leone to make an ongoing body of work about ancestry and memory. This exploration started with a series called The Sacred Star of Isis, which evolved into different photo and video pieces.

I started exploring NFTs as I was planning the Princeton show. It was December 2020, and I had just been invited to Clubhouse. I remember being in a room with Lady Phoenix and Beeple. It was right when he was launching his NFT, and it piqued my interest. I was like, "What is this?"

As I kept researching, I got more and more interested in NFTs. Then ONE / OFF hosted a conversation with Micah Johnson and some other creatives who were launching an NFT exhibition of African diasporan art. I tuned in, and really connected with the vision of ONE / OFF’s founder, Herman Marigny. I felt like, "We're on the same wavelength. Maybe this is someone I could reach out to." I sent him an email, and he was so welcoming. That’s when he invited me to be a part of the residency.

Was it challenging to get into the NFT space? How did you transition your mindset in order to work with the medium?

Initially, I thought that there was an overall aesthetic to NFTs, because so many people in the space are making digital and glitch art. But after learning the history of the movement, and what the possibilities are, I realized that doesn’t need to be the case. I started thinking, “If I'm going to make an NFT, I want it to be something that's a continuation of my practice.”

When I show my videos, they're usually projected in a large space that feels immersive. And when I started thinking about making NFTs, I knew I wanted them to be entry points for the larger body of work. So for the NFTs, I thought, "What if it felt like you could enter the work through your screen?"

With that in mind—and knowing that video and photography are my main mediums—I thought about how moving images can be immersive. In that way, they’re kind of the perfect medium to imagine other worlds.

We tend to think about the virtual world as an “other” world that’s outside of our physical space, similar to how we might view a spiritual world. I like the idea that the worlds that exist in our consciousness can actually mimic or mirror each other.

One of the things I love in your work are the textiles that are overlaid with videos. Do the patterns and colors have a particular significance?

They are inspired by my grandmother, who was from Sierra Leone. Her practice was making Batiks and tie-dyeing textiles which we call Gara fabric. I didn't grow up close to my grandmother, so the fabrics were what actually connected me to her. I have a series called For Mama Adama in which I'm making new fabrics out of her textiles, which I see as a way to communicate with her.

I brought the fabrics into the Princeton show as a way to create a kind of entryway. In that sense, there's another world happening behind the fabrics. I saw this as a way for me to commune with her spirit and with my ancestry. I like the material nature of fabrics, because they hold memory. Some of the fabrics in the show are pieces I've had with me for over 40 years. Fabrics your grandmother made are something you can never throw away. Luckily, they're beautiful and the colors seem to just get better with time.

How did the exhibition at Princeton come together?

At first, it was just going to be an acquisition. But then they were like, "We could actually do this as an exhibition." It was exciting.

So much of my work deals with the archive and with history, and the space the show is in—the Bainbridge House—has an interesting history, especially as part of Princeton University. I expanded on one series for the show, In the Face of History, by finding all these documents related to the Bainbridge House and to Princeton, as well as world history. I like to be able to deal with the space as an archive, and then make marks over the documents. With that series in particular, it will always be a work in progress because based on where I install it, and the history of those places, it changes.

This was the first time that I've shown those pieces magnified, too, which was a cool effect. They acquired four of them, and enlarged them in the exhibition so that it looks like this big document. It was nice to reconfigure all of these different works and make them space-specific.

What’s it like to step into your photographs as both a performer and subject?

My photographs tend to start off as dreams or meditations, and then as I'm creating them, they evolve into place-based spiritual experiences. With the photographs I made in Argentina, for example, I was paying homage to Afro-Argentines. I’ve taken this same approach in places like Sierra Leone and Nigeria, too. When I'm making work in these places, I'm thinking about ancestral energy, and when I feel it, I just let it take over my body.

There's one photograph and video, An Intergalactic Experience on the Mende Express, where I'm walking into this pond that’s surrounded by green foliage. In making that image, I was having a serene, spiritual experience and just letting my body go. The works aren’t so much planned as they are intuitive performances. I use the word “performance” to hint at how my body can perform in the same way that the wind or the trees move. I allow my body to just be in the space, and document that with the camera.

Do you have any rituals you like to do before starting a new artwork?

I try to calm myself, and go into a non-traditional meditative state before I create something new. I'm usually by myself, because I don't like to have people around me when I'm making new work unless it’s absolutely necessary.

Did you conceive of your NFT series as one body of work?

Yes. It’s all one body of work in which I envision myself as a deity, or as this being of transforming energy, that moves between spaces and iterations and locations. In the Wata Bodi series, for example, it hints at a process of rebirth in terms of how you can have one body that looks four different ways. I think a lot about how it's easy to place a simple identity on a body, but we're so much more than that.

I see everything as connected through a singular body. I like to think of it as a shared energy with our universe, and our land. Olóòkun, is the only photograph that is not me, and is a male figure, but in the context of the series this being is a reflection of me. Olóòkun is a deity that takes on different forms. Sometimes it has more of a male energy, and sometimes it’s more female energy. I like to play with this idea of opposites that can also work in a circular, flexible way.

I have another with a painted figure with the head bent inward, Anyanwu. With that piece, someone asked me, "Is that a male figure?" They were trying to put an identity on it, or to gender the figure, but I liked that they couldn’t. Instead, it's just energy or a being in transformation.

What are you hoping to do next with NFTs?

Right now I'm most excited about sharing my work in the space, because it’s all new for me still. After that, I'm interested in how I can push my visual language beyond video and photography, and how I can integrate computer-generated ideas and overlays. My head is spinning with ideas about what that could look like.

I am going to release new NFTs soon. My brain is still processing what’s possible, but I’m getting really excited about some new ideas. I’ve been thinking a lot about the Dogon culture, and how they were in communication with the stars. The Dogon didn’t have spaceships, but they still had intergalactic experiences without them. I want to play around with that concept by using my work to explore how bodies can have the power to travel to other galaxies.

I've also been doing a lot of research around water, so I think my next NFTs may continue to explore that. I'm also thinking about our environment, and how we can tap into our indigenous selves as a way to care for the earth. I'm not sure exactly what these new pieces are going to be, but I'm excited by what’s possible.