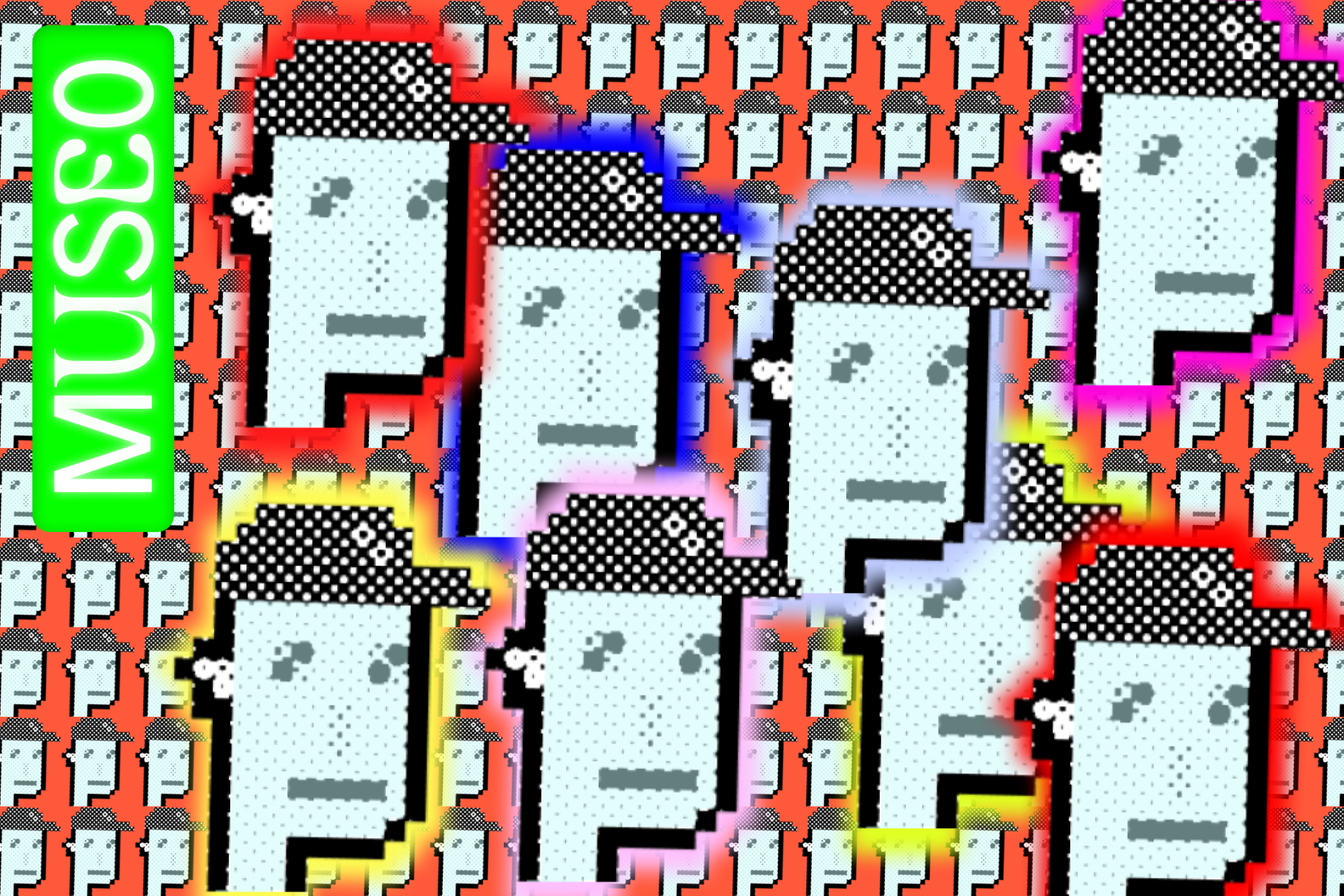 MUSE0 is pioneering a new model for internet-native museums.

Created by an Alien CryptoPunk, and governed by artists and curators, MUSE0 is building an otherworldly institution.

Where did the idea for MUSE0 come from?

Aaron Wright of MUSE0: MUSE0 flowed out of FlamingoDAO, an NFT-focused DAO whose purpose is to support and collect work from artists in the ecosystem. We take our mission seriously, and we want to support the best projects and artists that we can find. As part of that process, we began to dive deep, and collected very early NFTs like CryptoPunks and Autoglyphs, and a lot of great work from creators that we're seeing on Foundation and other NFT platforms. We were fortunate enough to acquire a very rare Alien CryptoPunk. After we acquired the Alien, we noticed that many people were just sending NFTs to the Alien's address—they were creating work as a tribute to the Alien, and interacting with it.

Since the Alien is from another world, it made sense to think about setting up a museum for the Alien itself—the resulting concept became MUSE0. There are so many great works in the NFT ecosystem from a tremendous number of creators—and not only do they need their works to be collected, they need them to be preserved. We truly believe as a collective that this is a real shift, and that there's going to be billions upon billions of NFTs in the future. The NFTs that we're seeing now are going to become really important, both for the art world, and the evolution of creative expression. We wanted to create structures that would be able to preserve those works, collect them, and support them in a non-profit minded way.

MUSE0 is a great step in that direction. In the process, we realized that if the world is increasingly going to tilt towards NFTs, and more creators are going to choose NFTs as a way to have the public interact with their work, that we should really think about how this Alien could support an internet-native museum. Not something that was natively-physical, like The Met or MoMA, but a museum that is digitally native.

Still from MUSE0 by Holly Herndon

What's fascinating about MUSE0 is that it is essentially inverting the top-down institutional model of museum’s as they exist, but what are the properties of an internet-native museum?

We've seen museums try to move onto the internet, and create different spaces, or ways, for their works to be presented online, but we wanted to start from the ground up. All the works in MUSE0, at least at this point, are digitally native. They're able to be read from the Ethereum blockchain, displayed anywhere simultaneously across the globe, and rendered in metaverses, or digital worlds. What we're hoping to see over the long run is that this digital-first approach will eventually translate into the physical world.

The second core component is that you have a flatter structure of governance. Today, many museums are run by trustees, or members of different committees who select what's going to be collected by or displayed in the museum. The museum itself hires more people to implement those decisions, which may also require a physical location to display the work. Here, the decision-making is a lot more open and democratically focused. With MUSE0, all the folks that decide what goes into the museum are artists or collectors that have donated work to the collection, and they're able to decide what the next works are that will be accepted and preserved.

Taking a bottom-up approach is also how the organization is structured. MUSE0 is bottom-up on the creator and governance sides. We’re hoping that through this model, we will be able to make better decisions as a collective, such as having more input from folks who will be able to identify and help us to collect works that will stand the test of time. We are also more open and permissive, so that voices that have been marginalized—or have not been particularly well represented—will be more prevalent in this model. In the long run, this will build a healthier organization overall. Instead of having curators or boards of museums making all the decisions about what the aesthetic should be for art, an internet-native museum can experiment in new ways.

I'm so ready to see this experiment play out. If MUSE0 aims to have marginalized voices more represented in this model, are there any rules in the decision making process that will make this effort more explicit in how the museum is governed?

Completely. It's in the founding ethos, and we wanted to make sure that plays a large part in all of this. We’re taking a community-first approach and there's no one person, or one party that's in charge of those decisions, which creates the right atmosphere for more open, free flowing conversations, which are more permissive in nature. As long as you're a member of MUSE0, you're able to participate on equal footing within a flatter governance structure. MUSE0 is also geographically diverse: creators in the NFT space aren’t just from the U.S., Europe, or other traditional areas where we see museums collect. They're from different places around the globe, and they're just as able to participate as if they were in one of these major art centers. I actually love that part of it. Members in Brazil, or in parts of the world that may have been overlooked, can just as easily participate and shape the direction of where things are going to go.

Still from Hidden Drive by Ikaro Cavalcante in the MUSE0 Collection

On Foundation, artists like Andrew Benson, Ikaro Cavalcante, Nicolas Sassoon, Holly Herndon, and P1xelfool, are minting works to donate to MUSE0’s collection. What is the process like for becoming a member?

Foundation has attracted a great group of artists—more so than other platforms—and you’ve really become the best place for emerging artists to mint and sell their work.

To become a member, you just simply have to identify an NFT that you think is worthy of being part of the collection. You don't have to transfer the NFT right away, just mint it, and submit it to MUSE0. If a member likes the work that you submitted, it goes up for vote for a period of time. If people accept it, then the NFT is transferred over to the collection, and you become a member the moment that it's sent. Once you're a member, you can join the MUSE0 Discord and participate in the conversations. We also have weekly calls where we talk through governance and directions we want to take the museum in.

Now, there’s many interesting conversations about what should happen next. How should we expand this? Members are starting to reach out to artists they want to support directly who may not have heard about MUSE0. There are conversations about how to render the collection in the metaverse, possibly allow higher value works to be lent out, and even how to provide initial upfront costs to support artists.

So there's potentially loans and commissions on the horizon for MUSE0, which is also related to how traditional museums operate as well. Though it’s not solely your vision for what MUSE0 will become, how do you see it growing out into the physical?

We've thought about MUSE0 in Seasons. In Season 1, we’re reviewing submissions and will collect 150 works, then let the community decide the future direction for MUSE0. We’re getting a steady stream of submissions which is fantastic. Ultimately, it is going to be up to the community to decide what to do, but I love this concept of an internet museum eventually having a physical component. One of the advantages that you have going digital-first is that you can stream this work simultaneously in multiple different locations.

You don't have to think of it as binary. You have a great work of art, it's being displayed in New York, Los Angeles, London, Paris, some other major city, or possibly somewhere else in the world. The works can be streamed simultaneously in multiple different places and interact with more people, which is a huge advantage for the artists that want a broader reach. MUSE0 also shifts the entire cost structure related to museums. You can imagine it becoming broader and interacting with more people around the globe, as opposed to the select group of people that can afford to get to major cities.

With these new structures, there are different analogies to make.

Blockchain technology fundamentally just inverts models and let’s us start as digital-first, which just makes intuitive sense. Instead of having a bureaucratic, top-down approach, MUSE0’s bottom-up approach makes sense in this context. We’re starting to see structures that are natively digital, that are birthed by the internet in different ways, that tend to just grow in importance and strength over time via numbers.

There’s no physical limitation to how much work we can collect. MUSE0 can have an infinite collection. There are no limitations on the number of physical locations the work can be displayed, works can practically be shown anywhere there's a screen. There also aren’t any limitations to where the collection can be displayed digitally. If we imagine a world with hundreds or thousands of metaverses, there could be an instance of MUSE0 in all of them. With MUSE0, there are no constraints on the ability for the work to be displayed, which I personally think is just completely fascinating.