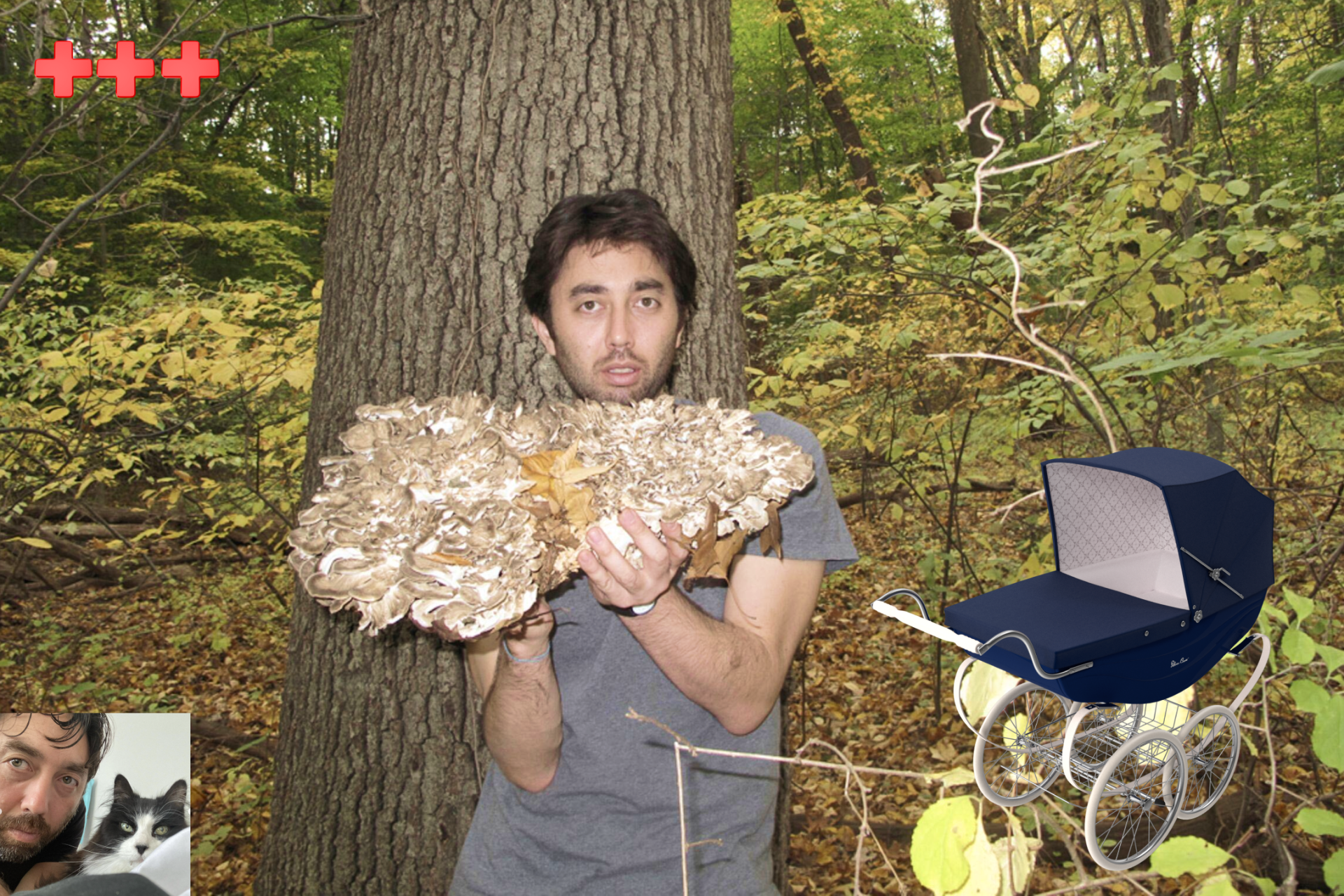 David Horvitz on a baby born in the back of an Uber.

On the way to the hospital, the artist helped deliver his baby girl. Now, the media coverage becomes the basis of his first NFTs—just days away from the due date of his next child.

Can you help us picture the scene? Your wife is going into labor, you’re en route to the hospital from Brooklyn to Manhattan, and within that 45 minute window—your baby girl is born. What was that like?

There are a few different ways to talk about it! It was something that actually happened in my real life: my wife gave birth to our baby girl. We took an Uber from Crown Heights in Brooklyn at 5:00am to our hospital in midtown Manhattan at Columbus Circle. As everyone knows, our daughter was born in the middle of the car ride while we were in transit. The car was in motion the entire time. I guess that, technically, I delivered her, but it was more that I caught her as she came out. My wife didn’t know how far along she was, and then all of a sudden, she was like, “I think I’m going to give birth now.” And then I realized she meant right now.

The other part of the story is how it took off as a viral story afterward, and how it resonated with some of the other works in my artistic practice. If you only looked at the media, you might’ve thought it was a staged art project, but that wasn’t the case at all. It was just a crazy thing that really happened.

How did the media get a hold of the story?

I posted a tweet with a photo of the Uber seat and a caption that said: “Have you ever delivered a baby in an Uber? I have.” I also emailed all of my friends and family to let them know what happened, and described the entire sequence of events. I sent it out to probably 100 people. My friend, Raphael Lyon, wrote to the New York Post, and shared it as a story submission. They reached out, sent a photographer over, and from there, the story got picked up by Daily Mail, local Brooklyn newspapers, and Art News and e-flux. It was even on Saturday Night Live’s Weekend Update. 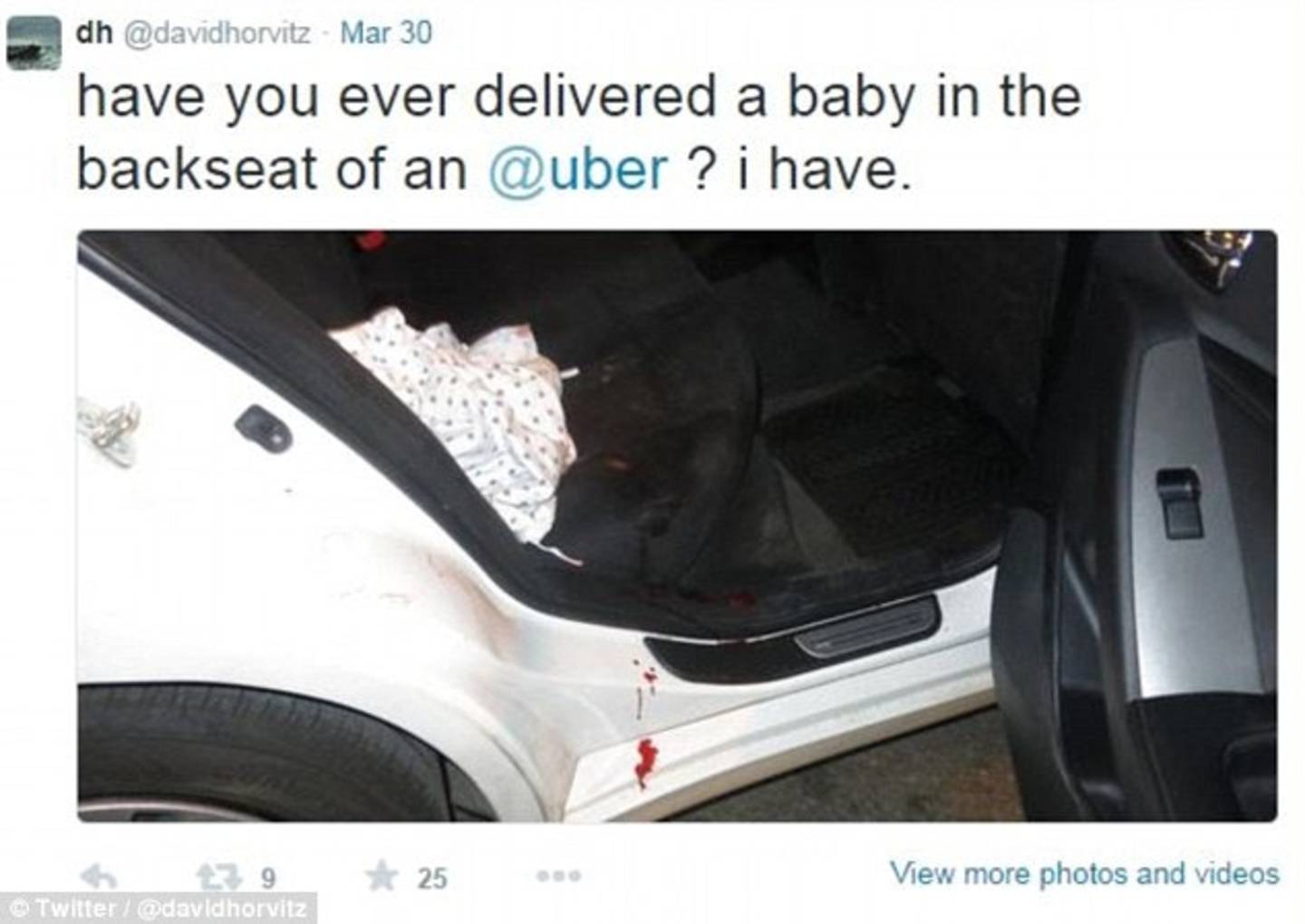 At some point, it went from being a crazy, viral story to becoming a “David Horvitz Artwork.” What do you attribute that to? What took it from everyday life to art?

Well, I think it’s because of my history doing stunts as artworks. Also, my wife is a curator and she was a postdoc at MoMA which added another element to the story. One of the headlines said “MoMA Curator Gives Birth in an Uber,” but she didn’t formally have that job title at the time. There was some blurring of facts on the journalists’ part, which made it kind of funny.

Sounds like a continuation of some of your previous work.

It’s actually happened to me a few other times, where something crazy has naturally happened, and then I can claim it as an artwork because it fits with everything else. I sometimes think these types of experiences are haunting me, or forcing their way into my practice through unintentional circumstances. But I also very much like the idea of coincidences, and finding something that just happens to be there. It's almost like a Duchampian readymade that's related to something coincidental. It can be funny and annoying, but also like, "Oh, wow, look! A new work." The artwork ends up making itself.

Did some people think that the story was a stunt?

Yeah, a lot of my friends were like, "That's not real," or "Oh, you set that up." That’s why I called it a retroactive readymade in the description on Foundation. I’m claiming it as artwork, even though it's already happened. But it wasn’t designed to be that way, our daughter just came out. The car never stopped. We were driving down Park Avenue and just kept going toward the hospital.

How did the Uber driver react?

He didn’t know it was happening at first. My wife was very quiet, and then whispered to me: “I think she’s coming out now.” We called our midwife at the birthing center, and the driver just kept driving. There was a moment where all of a sudden, we went from three people in the car to four. Just before we got to the hospital, the driver said, “That was amazing.” Whatever he was thinking, he knew there was a new being in the car that had just appeared out of nowhere.

What did you name the baby?

Have you told her this story?

Oh yeah. She knows it. Everyone knows it. Some people who we’ve become friends with since are like, "Oh, we read about this story. We didn't realize it was you."

What made you want to enter NFTs with this particular project?

There were different elements here that I thought were related. The virality of the project, and getting picked up by the internet media, all seemed to align with NFTs. It was also in tabloid print media too, but this kind of circulation of information that relates directly to the internet. It’s also this idea of a performance work. There's a history to this, an idea of owning a performance or owning a conceptual art. I thought that made sense in terms of this idea of the contract and the ownership of something that's so ephemeral and intangible.

For people who are new to your work, how would you describe your practice or the kind of space that your work inhabits?

My practice is very multifaceted, using varied multimedia. I've made work on the internet for about 20 years now, but it goes beyond that. A lot of my work looks at information circulation, virality, and rumors. For example, I did a performance piece at Frieze art fair in 2016 where I commissioned a professional pickpocket to do a reverse pickpocket, and put little sculptures into people’s coats. It was about the distribution of something, and the rumors around it. It’s both the actual event, as well as everything that happens around it, including the anticipation, the aura, and how it’s shared and circulated outside of the event.

After Ella was born, what happened next?

We had planned to go to a birthing center, where you give birth and then leave a few hours later. But because she was born outside of the hospital, my wife had to be there for a couple of days afterward. It was a very natural birth.

Yes, and now my wife is due for our second baby—this week.

Who knows, maybe we’ll see the second part of the series later this week: “Baby born on the side of the freeway” or something?! We're actually a bit worried because they say that when your first baby is born fast, the second one is supposed to be born faster. So, I don’t know…it could be happening right now.