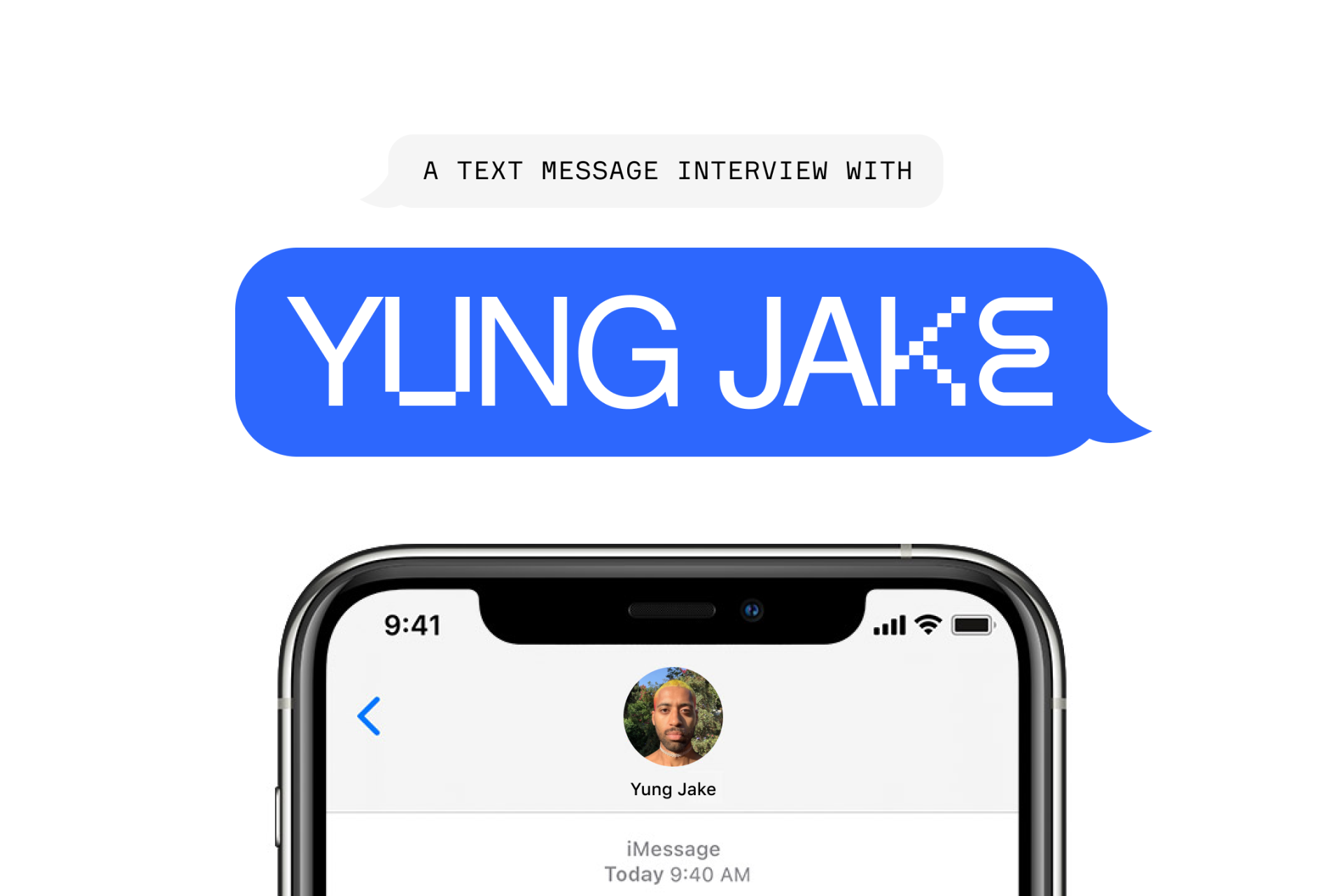 And honestly, that’s kind of exciting. As the internet feuds over them, the clear-eyed artist casts crypto as just the next step in monetizing digital art.

The NFT hype train is here, and it’s moving fast. Wherever you turn on the internet, there’s a new headline about a record-breaking sale or uber-famous celebrity entering the space. All the news makes you do a double-take and either: A) want to hop on, or B) set “NFT” to mute forever from your Twitter feed. There hasn’t really been an in-between. But Yung Jake takes a blasé stance that’s somehow radical these days. When we announced he would be releasing his first NFT with us, he tweeted, “ok u can shut up now everyone i’m selling an nft.” He’s just auctioning another piece of artwork, no big deal.

Yung Jake has already found commercial success for his universe of work, from music videos to paintings to apps to websites. He avoids labels, but the overall effect is like seeing a reflection of the internet itself—you'll find a video about the perils of being unfollowed on Instagram, or listen to “RIP Harambe” one of his raps that was released by Elon Musk, or scroll through his social media profiles full of celebrity emoji portraits. Memes, pranks, and emojis all coexist in his world, but what’s below the surface is a highly-attuned radar for the ways we all relate to each other through the internet. We interviewed Yung Jake via text message—the only way he does them—and if his answers tell us anything about those social undercurrents he has such a good sense for, maybe we’re headed for more middle-ground conversations about NFTs in the future.

What do you think about NFTs?

I'm indifferent. I see them as a new way to commodify data, but data commodification has existed since computer memory was invented.

How does that idea relate to your work?

I was making purely digital work before I was represented by a gallery. When I started selling physical works, I was impelled to make heavy and ungainly objects. I felt if someone was spending bread they should get something tangible and solid.

Will you make more digital art because of NFTs?

No. I make the kind of work I feel like. When I started making emoji portraits, there was no market for them. It was just “likes” and “follows,” but eventually I made a market by printing them.

Can you talk about the emoji.ink app and how you use it?

My friend Vince Mckelvie made emoji.ink. It gives you a pallet that allows you to paint in emojis and you can change the size of them and rotate them. It’s open to anyone to use and it’s going to be updated soon.

How do you decide who to paint next?

Why do you only paint with Apple emojis?

Because I have an iPhone and they are more familiar.

Are you going to mint Datamosh as an NFT?

How will people collect digital art 10 years from now?

Describe the evolution of the internet and social media from when you first started creating work to now.

Because of phones and algorithms that customize your experience on social media, the internet is less about searching and more about being fed. That’s why we call it the “feed.”

Where do you think the internet is heading?

The next logical step is the internet becoming more spatial.

Which emoji represents the internet to you?