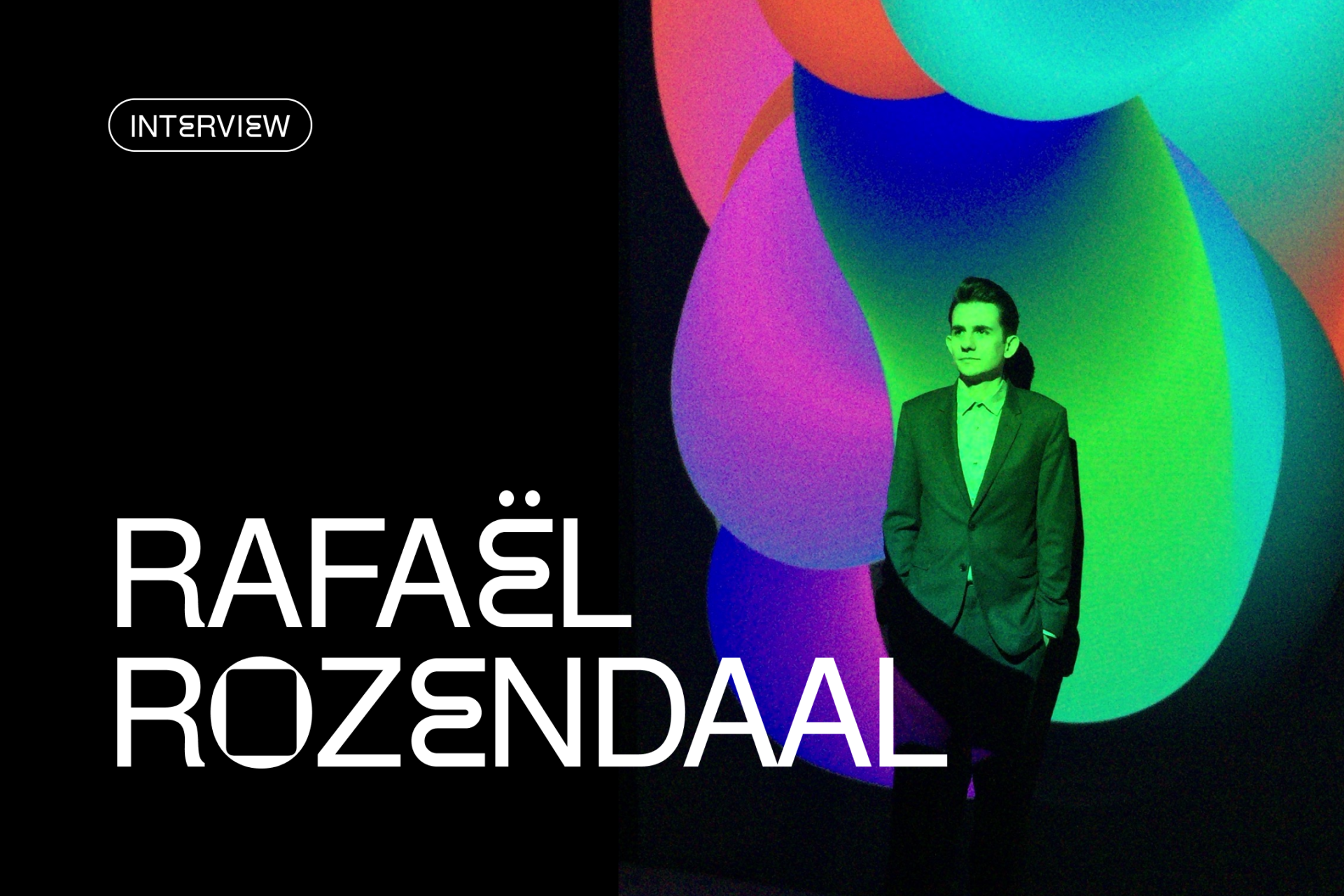 Rafaël Rozendaal on how digital art is always with you.

The preeminent digital artist makes the case for why we should all stop working and start getting creative online.

Rafaël Rozendaal has been invited into some of the art world’s most reputable institutions—the Venice Biennial, Stedelijk Museum, and The Centre Pompidou, to name a few. But more importantly, he’s reached mass-appeal popularity through his art websites (which have 60 million unique visits a year), his “Abstract Browsing” Chrome extension that turns any site into art, and his work displayed in the Times Square-based public art series “Midnight Moment.”

In his pursuit of everyday art, he’s very conscious of the museum’s confines and the internet’s potential. “If you think only what is shown in museums is art, then democratization will never happen,” he says. “...if you think that whatever is shown in institutions is art and is going to be part of art history, then that’s based on gatekeepers, because if they’re open then they’re not considered an institution. I think that is the big key difference: that the internet is completely open, that’s the only real difference.”

Rozendaal’s art websites are always open to the public—even after they’re purchased. In fact, the Art Website Sales Contract he wrote has been adopted by a whole generation of net artists, and it’s even more relevant as the NFT movement grows because it serves a precedent for buying, selling, and securing scarcity for digital art.

Here, we spoke to him about his decades of creating, sharing, and living with art online.

What was the inspiration for creating the Art Website Sales Contract?

The idea came from the realization that I make things on the computer and they need somewhere to live. When you have too many files on a computer or when people do web experiments with folders all over the internet, it can start to feel random. Domain names give artworks a place, and are gestures to say that the artwork will live forever in this place.

I started sharing my ideas around artworks-in-domain-names with other artists, and found that people often have an emotional connection to digital work and that they should be able to solidify this connection. The domain name seemed like the best option at the time because it was a way to secure real scarcity, not in an artificial way. There are only so many domain names and, as an artist, you just have to figure out which ones are available and fit the artwork. I always liked the game of finding new and available domain names.

The contract came many years after I started releasing artworks as domain names. I started registering domain names in 2001, and released the Art Website Sales Contract as an open-source document in 2011.

How did you go about drafting the contract? Do you consider the contract itself an artwork?

I talked with a number of video artists about how they wrote contracts for their video art sales. I also looked at the work of Seth Siegelaub, a conceptual artist and curator who had written a modular contract for conceptual art. I took those different examples and brought it to a lawyer, Aernoud Bourdrez, in Amsterdam to expand on it. Basically, I would say things in plain language about what I wanted the contract to accomplish and then he would formalize it.

I do think of the Art Website Sales Contract as an artwork. I created it for myself but I also wanted it to be viewed and shared publicly, so it could be used by other people. The contract was a way of encouraging people to create digitally, and to ensure that while the work is always accessible to the widest possible audience, it can also be privately owned. The advantage of digital art is that it can move around freely, and I didn’t want to perpetuate the mentality that owning something meant it had to be locked away. That’s a big part of why I wanted to share this idea.

Can you share a little bit about your personal background and some of your earliest memories of the internet? What were some of your formative experiences online?

I grew up in the Netherlands, but I've always been traveling. I was attracted to the internet because of its global nature and the ability to share work with everyone. The first things I did online were look up lyrics of bands I liked and comic book information, that kind of stuff. Pretty quickly, I started to wonder: “Is there anything on the internet that doesn't refer to the world outside of the internet? Is there internet-specific content?"

That’s around the time when I discovered the work of people like JODI and other early net artists—and there was quite a lot of activity in the Netherlands. I was exposed to their work quite early, and thought it was so exciting that artists could have the same stage as a museum or Coca-Cola. Everybody is kind of equal on the internet. I felt empowered by this idea that I didn’t need much to get started. It’s not like you need $200M dollars to make Star Wars; everyone here has an equal start. That’s what appealed to me the most.

Community seems like an important element of your work. How do you go about building those relationships and collaborations?

When I first started on the internet, there weren’t that many people making internet art. So, you could quickly email each other. And then, we started creating exhibitions together.

I created a platform called “BYOB” (Bring Your Own Beamer) where a lot of people come together and bring projectors to show screen-based works. We started to all get to know each other online, even though it’s kind of anonymous, but were still drawn to each other’s work. It turned out that meeting people you admire online in person is very powerful.

NFTs are similar to the early internet because they’re not so much about the persona of the individual, but more about the artworks themselves. I find that very appealing because I can quickly find other like-minded people.

You’ve seen many different phases of the internet. How would you describe the phase we’re in right now?

One of the things I liked about the early internet was that it was low bandwidth, and this required a certain level of abstraction or translation. That's why things were pixelated, or why ASCII art became so popular, or any other method you could find of simplification. I’ve carried that kind of ethos with me throughout my practice.

I'm not a fan of social media because it's so much about jealousy and distraction. Also, the higher bandwidth meant that the internet became more like television and everything became more mainstream. And that was less interesting to me.

That said, the internet is also very empowering. It’s great in low doses. In my daily life, I have a ritual where I install apps to turn off the internet. So, it'll turn everything off for four hours just to be unavailable. But then, I'm also excited to post new work or share my work. The attention economy is quite intense. It's similar to fast food where you have to learn to live with it—and not give in to all your impulses.

What kind of response have you received from collectors who’ve purchased your art websites?

At first, most collectors ask, "How do I install the work?" I would imagine collectors are asking similar questions about at-home displays with NFTs. But after a while, they understand that digital art is always with you—it’s everywhere. One of my collectors owns muchbetterthanthis.com and whenever he travels, he puts an iPad in his hotel room and sets it to that work. I love the idea that when you own a digital piece, it goes everywhere with you.

I love how you put the collector's name in the title bar of the browser. It feels like the equivalent of public art. Like, when you go to a park and you see a sculpture, and it says that it’s dedicated by or supported by a certain individual.

It’s exactly like that, and the same goes with NFTs because the more an artwork is shared, the more it increases in value. Traditional art collecting is like, "It's my work. I'm going to put it behind closed doors." With digital work, that doesn't make a lot of sense. Actually, it’s the opposite: the more the piece is seen, the more valuable it is. Ideally, an artist should be sharing ideas and welcome other artists to build upon those ideas. When you think of art as being a snowball of attention or influence, you can really see that it shouldn't be behind closed doors.

How do you see NFTs carrying on the work you did with the Art Website Sales Contract?

This is kind of utopian, but I think that people shouldn't work. They should be allowed to follow their own interests—and automation should take care of work. My hope is that, as time moves on, we’ll see a larger percentage of the population involved in creative activity—which means we're going to have to figure out models to support that. NFTs are a huge step in that direction.