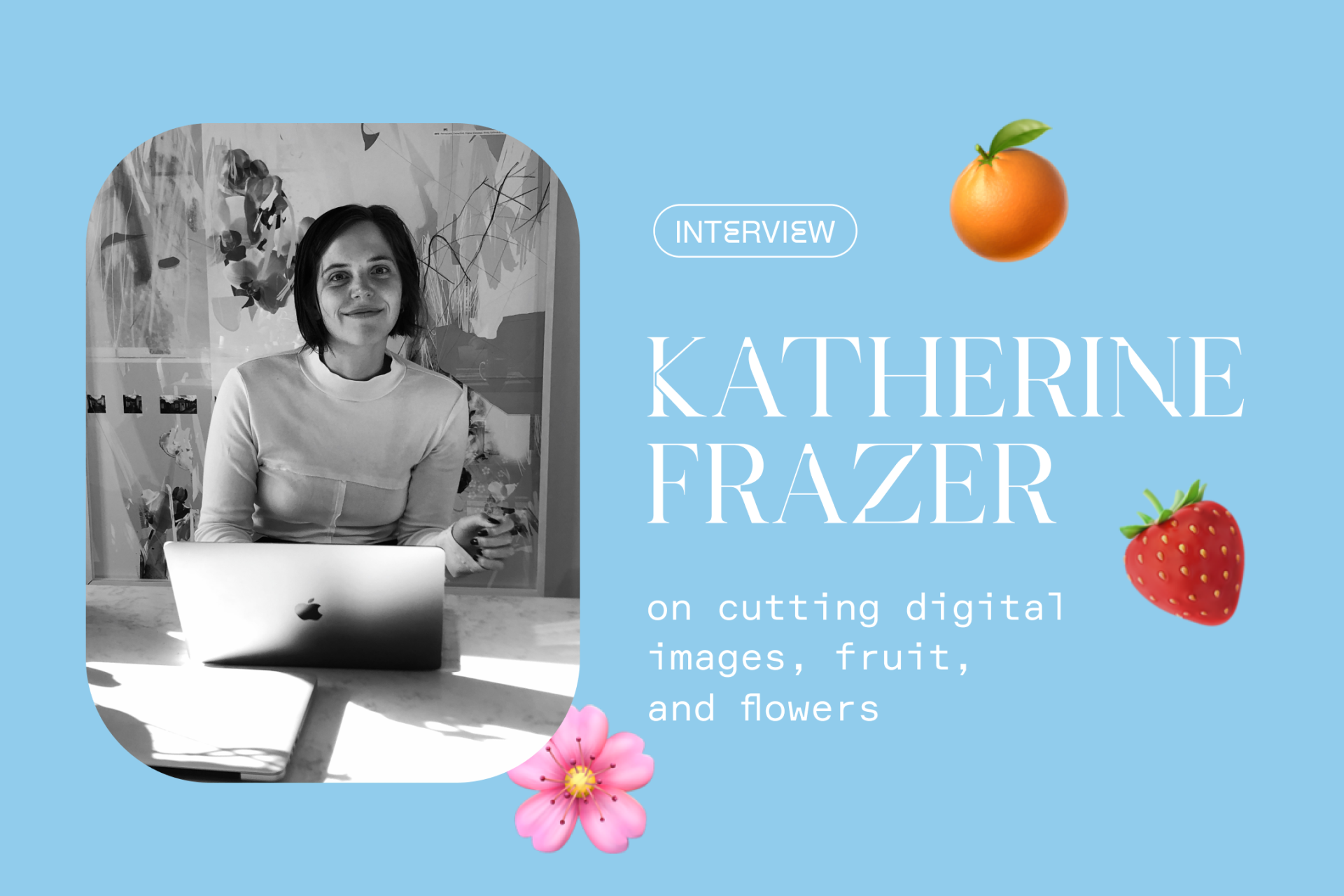 The Apple-alumna graphic designer has built an art practice around subverting everyday digital tools and finding corners of delight online.

Katherine Frazer is an apt explorer of consumer technology’s social implications: the graphic designer worked at Apple for five years and has done commissions for MTV and alt-art site NewHive alike.

Her art practice reflects and reimagines that work. She takes and collects thousands of iPhone pictures and screenshots, composes them on her iPad and computer, and uses consumer software like Keynote. The end results are often fluid, trippy, kaleidoscopic.

She has quickly become a sought-after artist on Foundation for those digital paintings as well as videos of her eating fruit on camera—offered as a friendly online gesture and inadvertently a trigger for everyone to express their own personal relationship to art.

Here, she tells us about exploring NFTs, memory, ikebana floral arrangements, and resilience.

Let’s start with your digital paintings made in Keynote, one of which was your first-ever NFT. What’s the story behind that series?

I worked as a Human-Interface Designer at Apple focused on the Keynote, Pages, and Numbers products for the last five years, and originally tried out this format as a way to get to know them a little bit better. Recently, I rediscovered the format and wanted to reinterpret it and incorporate some of my newer techniques into Keynote. It felt like a nice way of combining the old and new, and giving it a little novelty by minting it as an NFT.

I’m really interested in NFTs because of the authenticity and forever-ness of them. With all of my paintings, the original material is sourced from photos I’ve taken with my iPhone. I’m taking moments that catch my eye, or moments I really want to remember, and then translating them into a digital format—either as a way to alter or augment a memory. The blockchain is a natural place to house my paintings because it’s arguably the most authentic digital display. The ideas I’m playing with around memory, perception, and narrative are complemented by presenting them as NFTs on the Ethereum blockchain.

How do you come up with the titles for your pieces? They're very unique, with ASCII, text, and emojis. What are you trying to express?

I have formal training as a graphic designer and have always been interested in typography. I see the titles as complementary works to the visual artifacts. The titles reference pop culture and subcultures that I'm interested in, or that's on my mind when I'm thinking about it. A couple of the paintings indirectly reference Bladee songs, for example. The typos also add some personality, but then some of the pieces are more formal or concrete. In those cases, I title them based on past tweets from a secret Twitter bot I have that remixes my words. It’s all playing into this exploration of memory that my work deals with in one way or another, grabbing old tweets, jumbling them back up, and taking fragments of this tweet or that tweet and just shoving them together in new ways.

Here’s the question the whole internet wants to ask: What’s up with the fruit videos?

I like to operate within a lot of constraints for the work that I make. The fruit videos are nice because the format is so clear-cut to me: They’re a minute long, filmed with a webcam, and I’m only eating fruit. Fruit is a universally positive food, with positive associations—it’s healthy, it accommodates pretty much every diet. It's beautiful. I also think that cutting up fruit for someone is a very kind, loving gesture. It's hard to think of fruit in any type of violent or conflict-ridden circumstances. This is the first time I’ve put myself in my work, so I wanted it to be a pleasant experience—at least at first.

It’s also my way of reinterpreting or reclaiming two historically male-dominated spaces: tech and performance art. The videos are decidedly feminine; the backdrops have flower arrangements, pink art, and gender-fluid clothing. Presenting them in a crypto context, and referencing historical male performance artists like John Baldessari and Andy Warhol are a way of subverting the status quo.

What kinds of responses have you been getting to the fruit videos?

They’re more controversial than I thought they would be! Some people are offended by them, and say they don’t have artistic merit or they read them as flirtatious. Some people think they’re nice and like having a snack with a friend. Some people have critiqued my body or said they’re weird—and others have told me, "I love them. Please don't ever stop posting them because it's the one happy thing I get to see on my timeline."

The responses really run the gamut, and ultimately I think it depends on your own personal relationship to art. Or just, do you know me personally? Because with most work, I think, if you know someone you're probably more likely to receive it positively.

There’s a throughline of flora and fauna throughout your digital work—whether in the paintings or your videos. When did you start getting into arranging ikebana?

I started studying ikebana a few years ago because I wanted to study a creative discipline that would take the pressure off of being an expert. With ikebana, the assumption is that you're going to be studying this for 50 years before you're even decent. It's endless, non-commercial, and there's a lot of structure and accountability. It gave me a way to channel my creative energy where I actually had to make stuff rather than just be like, "Oh, I'm not making art anymore."

Ikebana is an amazing practice because it’s a process of constructing a living sculpture where I’m really harmonizing with the plant materials and working alongside them. I’m trying to accentuate the natural beauty of whatever I’m working with, and maybe edit or prune it a little bit—but it's really about the flowers or branches themselves. I've been trying to incorporate that into my practice now.

The idea of having a beautiful living sculpture in your living room or your dining room, just for personal enjoyment really struck me—as well as seeing how the Ikebana arrangement changes over time is equally fascinating to me. I get a bunch of flowers, cut them up, and arrange them in a beautiful, natural way. But then the dialogue I get to have with an arrangement as it starts to sag, fall apart, or wither over the span of a week is really beautiful to me. It's the ikebana arrangement—and all of its natural beauty—asserting its own agency and collaborating with me.

I've started bringing in formal concepts from ikebana into my paintings, but they don’t have the same element of temporality. I feel like an arrangement is best when it becomes a piece of furniture almost that you have in the background and you enjoy it or whatever. I like the idea of continuing to bring elements of ikebana into my art practice, and being able to explore this temporality in a way that I hadn't before.

Your most recent piece brings in the element of temporality, as an animated wallpaper. What was the experience like of arranging ikebana digitally? How different was it from the way you put together physical arrangements?

The digital format offers a lot of possibilities because it isn’t tied to seasonality or geography. I recently moved from California to New York, and it makes me sad that there are way fewer types of flowers to work with. I like that there’s a lot of freedom with digital tools, but the principles are the same. Ikebana starts with rudimentary arrangements that specify how many branches you should use and what angles they're at, and then as you gain proficiency, you can be more creative.

I have a lot of structure in my artistic practice; it’s very constrained, and I have a lot of rules for myself. This wallpaper was created by using photos I took with my phone and editing them into Keynote. I use the Instant Alpha tool to remove the background and that's all that goes into a piece. Maybe occasionally a drop shadow. But that's it.