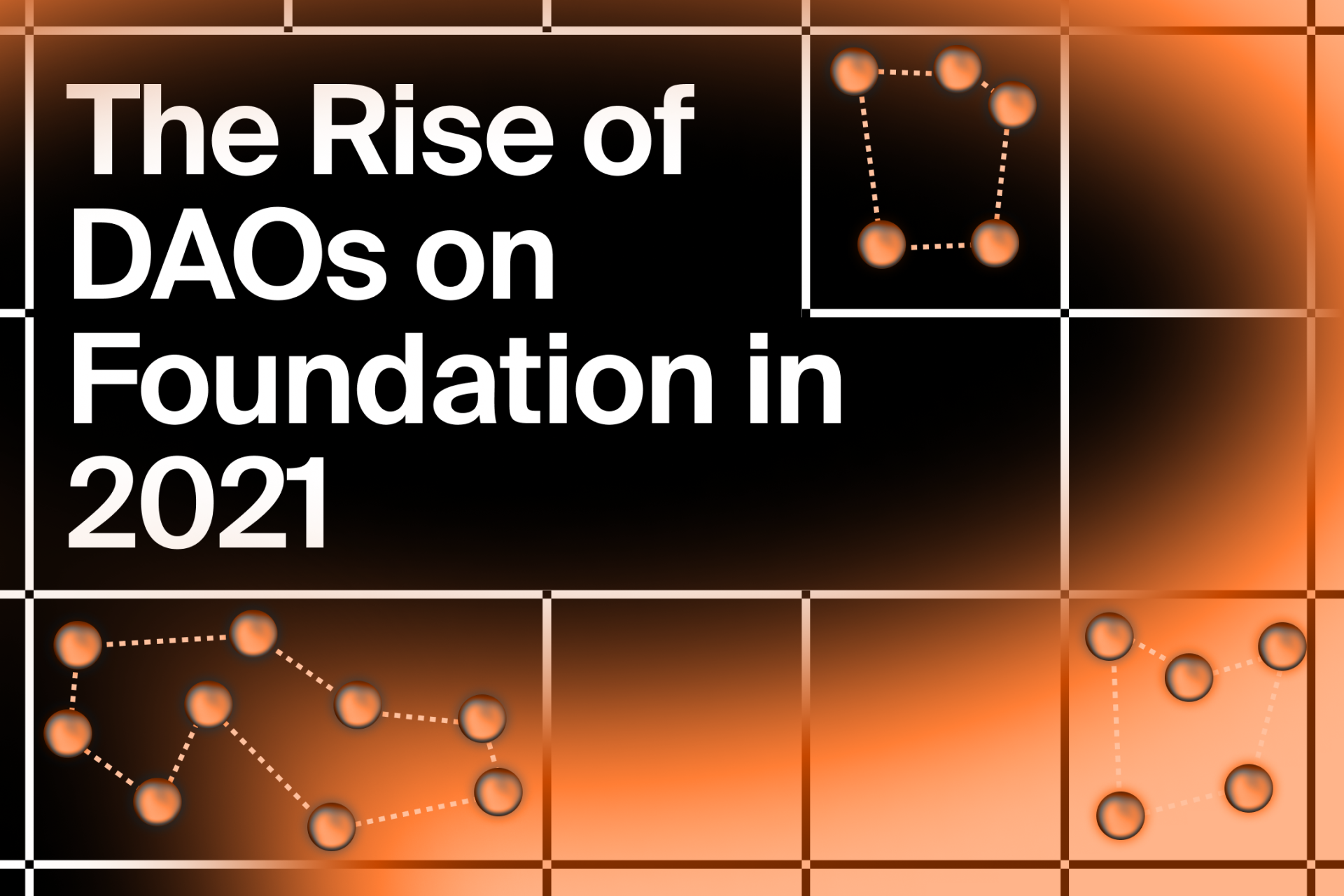 The Rise of DAOs on Foundation in 2021

From bands of collectors coming together to own Edward Snowden’s genesis NFT, to artists forming collectives to advance creativity, DAOs are just beginning to show their true potential in web3.

There are many different ways that a DAO can function, but one thing these communities share in common is that they come together to cooperate digitally—whether they’re preserving and collecting art, distributing a token for governance, or simply splitting the bill at dinner.

Decentralized autonomous organizations like PleasrDAO, FlamingoDAO, and CypherDAO—to name a few—initially arrived on Foundation to pool funds to collectively purchase NFTs, and signal their shared values. For instance, PleasrDAO famously collected Itzel Yard’s Dreaming at Dusk for 500 ETH, which was used to fund The Tor Project’s mission of defending privacy and freedom online.

The DAOs we’ve seen to date are early blueprints for others to expand on, whether experimenting with collecting or creating as a means of inscribing their ethos on the blockchain, to building digital-first cultural spaces that aims to go beyond what traditional art institutions have been able to achieve.

As we look ahead to a new year, we’re highlighting some of the DAOs that are organizing, developing, and bootstrapping funding at the new frontier in web3.

PleasrDAO is a collective that quickly came together on Twitter in a shared effort to win the auction for pplpleasr's genesis NFT on Foundation. The impetus behind PleasrDAO is simple: a group of collectors pooling funds together into a shared multi-signature wallet, to compete with other major bidders, and win high-profile auctions. After winning their first eponymous auction, PleasrDAO went on to collect other works such as Edward Snowden’s Stay Free and Itzel Yard’s Dreaming at Dusk. As a collective entity, they want to support good causes, noting that they aim to collect NFTs that should “belong to the people.”

“We want to define industry standards that will move the entire system forward, and show what’s possible with DAOs from a technical perspective. We want to utilize our treasury to push this space forward and support the teams that are doing that.” —PleasrDAO, in conversation with Foundation

With the goal of “harnessing the energy of culturally significant cryptographic artifacts,” CypherDAO was founded by a group of individuals who have been active in crypto since 2016. At the core of CypherDAO’s treasury lies a collection called “The Fungible,” by none other than the inimitable artist, Pak. On this collection, CypherDAO notes:

"By leveraging blockchain technology and NFTs, 'The Fungible' not only provides collectors with novel assurances of scarcity and ownership, but exposes them to the unique features with which technology can endow artwork. Through this collection, Pak scrutinizes our understanding of value. What does value mean, and from where does it derive authority?”

herstoryDAO formed to collect and preserve the work of Black creatives and femmes, including stunning works by Yatreda, as well as works from Brittany Pierre, and Linda Dounia, among others. In the herstoryDAO manifesto published with Foundation, they state:

“We are on the precipice of a revolution to ensure the preservation, longevity, and amplification of Black femme NFT creators. herstoryDAO exists to ensure that the metaverse we are actively helping to architect with our contributions, collections, and experiences is an equitable space—forever.”

Established well before NFTs became a cultural phenomenon, FlamingoDAO was paving the way for the collective ownership of digital assets. When we asked Priyanka Desai, operations lead for FlamingoDAO, why NFTs are a compelling asset type, she noted:

“The scarcity aspect plays a big role. Having a piece of the internet that's fundamentally yours—something that you think is beautiful and unique and special—is not something we’ve been able to do until now.”

FlamingoDAO collects with a keen eye on Foundation and holds a number of widely coveted works in their vault, including Ix Shells’s ᴀꜰʀᴏ ɴᴇᴛʀᴜɴɴᴇʀ ɪɪɪ .::.:.:., and Reuben Wu’s Sorcerer.

MUSE0 functions as an “internet museum curated by an alien.” Indeed, the DAO itself spawned from FlamingoDAO, soon after they acquired a rare Alien CryptoPunk. As members began to notice that artists were sending NFTs to the Alien’s address to pay tribute and interact with it—it sparked an idea to create a DAO for the growing collection. An experiment in digital-first institution building, MUSE0 allows artists to submit works for consideration to add to the collection, then the members of the DAO vote to acquire the NFT. Once voted in, the work is transferred to the MUSE0 vault, and the artist receives a token to become a member of the DAO. The cycle repeats and a new, participatory institution is born for NFTs.

As Aaron Wright of MUSE0, said in an interview with Foundation:

“We’re hoping that through this model, we will be able to make better decisions as a collective, such as having more input from folks who will be able to identify and help us to collect works that will stand the test of time”

New on the scene, ObscuraDAO entered the chat to catalyze the possibilities for photographers by facilitating their projects and supporting them through the sale of NFTs. Led by Alejandro Cartagena, Cooper Ray, Emmy, and Tony Herrera, members of the DAO aim to enable photographers to create their dream projects through commissions, grants, leadership, and education. On the mission of ObscuraDAO, Alejandro Cartagena said:

“We are supporting 100 photographers to go out into the world and do what they love: photograph. This project will create a timestamp of the builders, small and big, of our web3 community.”

Right now, they are establishing a fund to support photographers in pursuit of creative projects. Their first initiative is a debut collection on Foundation called Who We Are, which features 200 portraits taken by 100 photographers in the DAO.

UltraDAO is a group of artists and art collectors, working together to build a strong community through art and technology. Their core ethos is to support new ways to explore and experience art—by collecting NFTs with historic value, and releasing projects voted on by DAO members. Their enviable collection includes several works acquired on Foundation, including works from Yatreda's Kingdoms of Ethiopia and Movement of the Ancestors, and a collaborative piece by IX Shells and Diana Sinclair, New Era Pending, debuted during The Digital Diaspora exhibition.

PartyDAO came together with the singular goal of building and launching PartyBid—a way for people to pool their ETH together to bid, collect, and own NFTs as a group.

On the PartyBid site, anyone can form a party to try and collectively own an NFT on Foundation and beyond. If the party wins, all the contributors are granted a proportional amount of tokens that represent fractional ownership of the work. With PartyBid, 117 members of the BlitSquad party pooled together 33 ETH to win the auction for the Blitmap Collection NFT on Foundation. Parties have also come together to acquire works by Jen Stark, P1xelfool, Panther Modern, Felt Zine, and Jack Butcher. PartyBid is only the beginning of the first community-built tools that embrace collective ownership of digital goods made possible with NFTs.