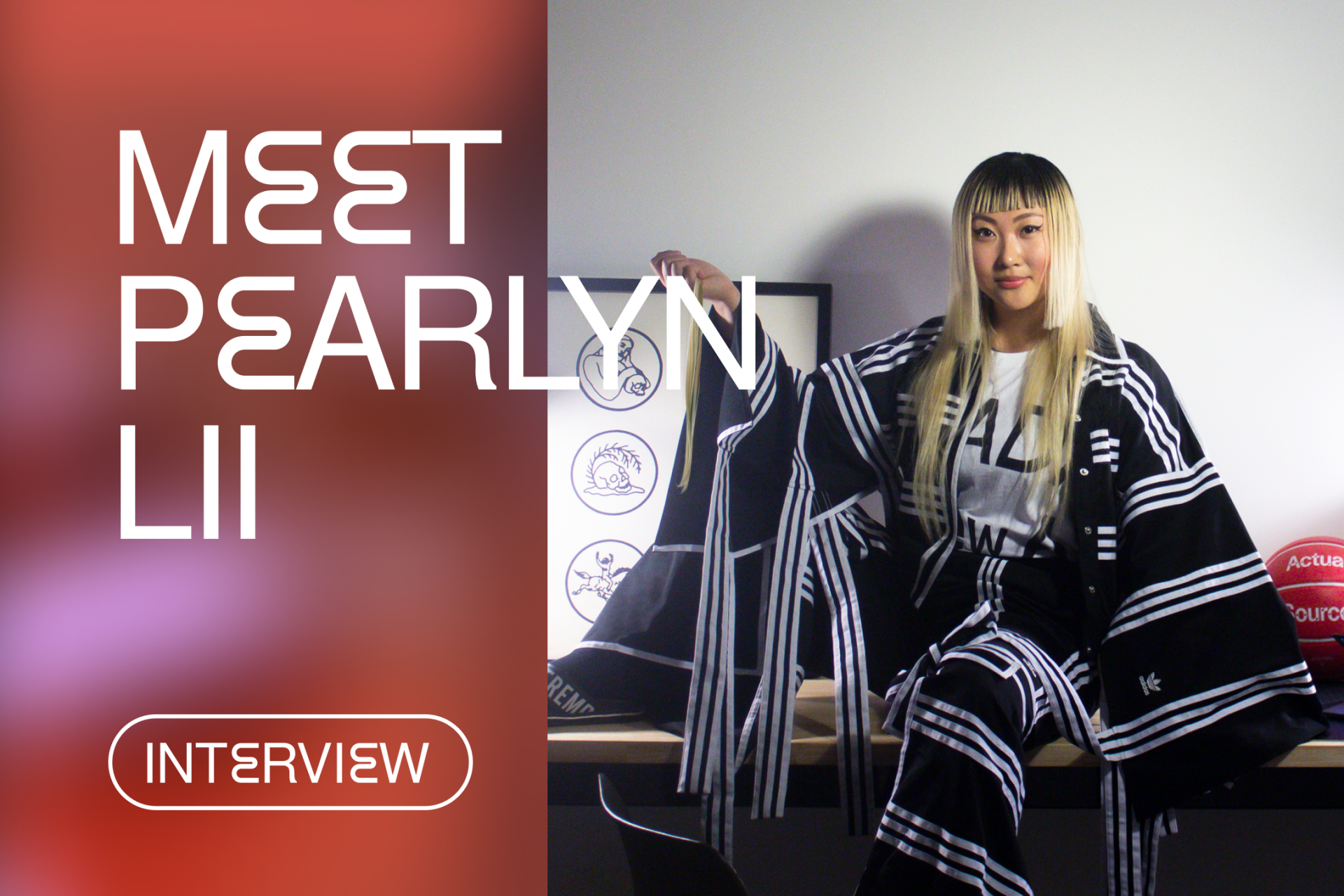 Pearlyn Lii on transforming herself into a “Real Girlfriend” for art.

Using performance and illustration to examine female identity, Pearlyn Lii has crafted surreal stories that merge physical and sensory experiences with digital, typographic, and code-based media. Now, she’s taking her practice one step further by personally transforming herself into female archetypes of the digital realm.

For her first-ever NFT (more on NFTs here), Lii is releasing collectible animations adapted from her AR video performance, Real Girlfriend, in which she embodies a series of virtual female characters. Lii met with our Head of Community, Lindsay Howard, to talk about her work, what it takes to craft a compelling story, and the power of unreliable narrators.

What are some of your earliest memories of female archetypes?

My grandmother is 106 this year. I remember growing up with her in our tiny apartment in Hong Kong. Her feet were bound, and I’d sit next to her and she’d tell me myths, folklore, and fairytales from all around the world. I realized later that the female characters in her stories differed from the ones in Grimms Brothers’ and the stories I’d read years later in LA. That’s when I started to see how archetypes are a human construct, and it’s all in how you tell the story. So now, as an artist, I want to explore that within the digital realm, and look at how lore and assumptions extend into the virtual space.

What are some of the archetypes that you find interesting in the digital space?

There are four that come to mind: Joi in Blade Runner 2049, the girlfriend simulator VR Kanojo on Steam, TechDomme Mistress Harley, and womxn on Twitch who nonchalantly live stream monologues about their lives while suggestively clad. In each of these archetypes, the female character plays a supporting role, in that sometimes she seems powerful, and in many micro-moments, she doesn’t.

Overall, I’m currently interested in the dynamics of complex characters in virtual contexts, and also in the audiences, often fanbases, that bubble up around them. The project I’ve been working on lately (which is what I’m dropping on Foundation), Real Girlfriend, is an amalgamation of these various interpretations of female characters in digital spaces.

How do you feel when you step into that role of Real Girlfriend?

When I put on the purple wig, I’m a character. I also feel like I slip more into my subconscious. There's a nonsensical kind of part of my brain where languages just kind of flows. I'm slipping into a character that is pulling from that area of my brain.

How does monetizing the work play into the concept?

In my research into female archetypes, I found that some of the Domme-sub client relationships ended up turning into long-term relationships that would last anywhere from months to a year. So, even though it starts as a transactional relationship based on a contract, the relationship would become intimate over time. I thought this was interesting, because it blurs the line of what is monetized.

I love this idea of emotion as a currency in digital space. What does that mean to you?

As we go through our personal social media accounts, there's this broad expanse of imagery that we're being fed. All that translates into one surface-level kind of emotion that saturates the space. And then in these power-based, transactional relationships, it's almost like emotions are fundamentally what are being traded back and forth.

As another example of how emotion can translate into currency, there's a category of virtual domination called findom (or “financial domination”) where the relationship is built on the Domme having complete power over and access to the other person’s bank account.

Do you see a connection between the way mythologies were developed with fairy tales, and how we craft stories about ourselves in the digital realm?

Everyone is a creator of sorts, and then once we add our avatars, it makes it seem like we all need to have personas. We’re now heavily invested in imagery and maintaining our online presences, in both intentional and unintentional ways.

In my work, I look at the different versions of the stories we’ve been told, and the ones we tell ourselves as a result of that.

How have you translated the Real Girlfriend piece into an NFT on Foundation?

These pieces are digital impressions of an AR video piece that I created specifically for Foundation. They are three variations on the female archetype that I play out in the AR piece, and are three stand-alone characters. Well, actually, they could be seen as alt versions of the same character, but they’re also digital apparitions. There’s something kind of eerie about it.