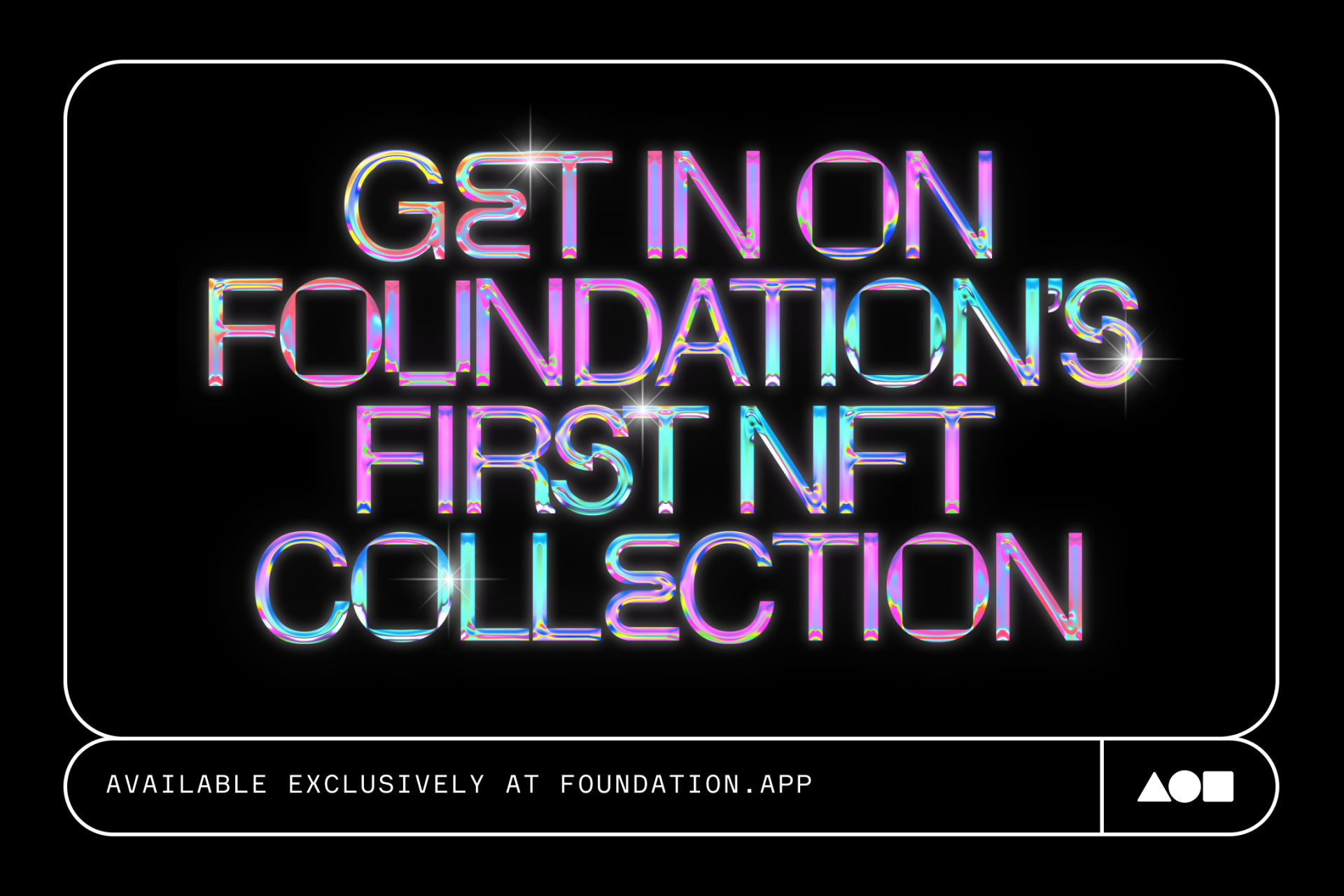 Get in on Foundation’s first NFT collection.

As NFTs explode across the web, we’re bringing an exclusive new collection of digital art onto the scene.

Today is a big day at Foundation. We’re releasing 45 digital artworks made by visionary creators from around the world. This is also our first offering of digital art NFTs. (Don’t know what NFTs are? Check out our primer here.)

The artists in our debut collection are well-established in both the contemporary art and crypto worlds. They have pieces in world-class art museums, they’ve worked with leading global brands, and they’ve invented new technologies and approaches to artmaking itself. Some have released NFTs already. For others, this is their very first time minting a token.

All of this amounts to an unprecedented opportunity to own works by artists who will be big in the NFT space for years to come.

The works in today’s release were selected by Lindsay Howard, Foundation’s Head of Community. Lindsay has been a pioneering curator specializing in digital art for over a decade, with exhibitions at New Museum, Museum of the Moving Image, and Phillips Auction House. Here’s her take:

“Digital art is inherently anti-establishment. It rejects the status quo, defying market standards, overriding frameworks for display, and interrogating ideas around scarcity, ownership, and value. This makes digital art exciting—but it also presents challenges for creators who want to monetize their work.

In the last few months, buyer interest in NFTs has exploded, and it’s been thrilling to see that translate into more support for digital artists.

We’re now entering a whole new era of art collecting. The blockchain’s recording of provenance and ownership allows an artwork to be freely accessed and keeps the community-driven ethos of digital art alive. It also makes it possible to fairly compensate artists for their work, while opening up a new collector’s market that promises to be quite lucrative, especially for early adopters.”

NFTs will be huge for artists and for the collectors who get in first.

We’re excited about what this launch will mean for artists. But it also presents a huge opportunity for collectors.

For our debut NFT collection, we’ve selected acclaimed artists with established followings and sales records. Even if you’re not familiar with an artist, you can be sure that they’re on our platform because their work is of the highest quality—and because we expect its value to appreciate over time. Everything on our platform is fully authenticated and 100% legitimate, which means buyers can purchase with confidence.

This collection will give buyers the opportunity to build a reputation as an early adopter in the digital art world. Soon, buyers will be able to share collections publicly and establish themselves as tastemakers in the community. They’ll also have a voice in how Foundation develops over time, because as we see it, investing in artists is an investment in our platform.

Getting excited? Here’s a quick tour of collection highlights:

Serwah Attafuah is a graphic designer, 3D artist, and musician who creates dreamlike cyber wastelands and afro-futuristic self-reflections. She’s performed with punk and death metal bands, and the ethos of her music comes across viscerally in her art. While she’s been featured prominently in many exhibitions and publications, this will be her first time minting her digital artwork as an NFT.

If you recognize Jon Burgerman’s googly-eyed, pop-art aesthetic, it’s likely because you’ve seen his work featured in exhibits around the world, or by Apple, Instagram, Nike, The New York Times, or Disney. In fact, the NFTs he’s minted for Foundation were previously displayed in Times Square and in Apple’s flagship stores—so they’re already on the radar of millions of people.

In addition to being an internationally recognized artist, Zach is a co-founder of the C++ creative coding library openFrameworks, and he helped start the pioneering School for Poetic Computation in NYC. Currently, he’s working on the celebrated EyeWriter project—a low-cost, open-source toolkit that helps people draw with their eyes. EyeWriter has won top prizes from the London Design Museum, FutureEverything, and Ars Electronica.

Pearlyn Lii is an artist who uses performance and illustration to examine female identity. In her work, she crafts surreal stories by merging physical and sensory experiences with digital, typographic, and code-based media. Her work has been written about in Dezeen, Vogue Italia, Wallpaper*, Forbes, and by the Society for Experiential Graphic Design, among others.

Jonathan Monaghan is an artist working across a range of media to produce otherworldly objects and narratives. He’s been featured in exhibitions at prestigious institutions all over the world, such as The Walters Art Museum in Baltimore, Spazio Ridotto in Venice, Palais de Tokyo in Paris, and Postmasters Gallery in New York. His work has also been written about The Washington Post, VICE, and The Wall Street Journal.

Earlier this year, Signe Pierce dropped two prints and a video work on Foundation, and quickly became the top-selling artist on the platform. Now she’s back with three explosive new video works, which will be her first-ever NFTs. With a fiercely loyal online following, Signe Pierce is quickly becoming a prominent voice for her digital-native generation.

Sarah Zucker is a pioneer in the crypto art space, and is sought after for mixing the gorgeous and grotesque through humor, psychedelia, mysticism, and the interplay of cutting-edge and obsolete technologies. Her animated GIFs have been viewed over 6 billion (BILLION!) times on Giphy, and are beloved items for anyone looking to grow their digital art collection.