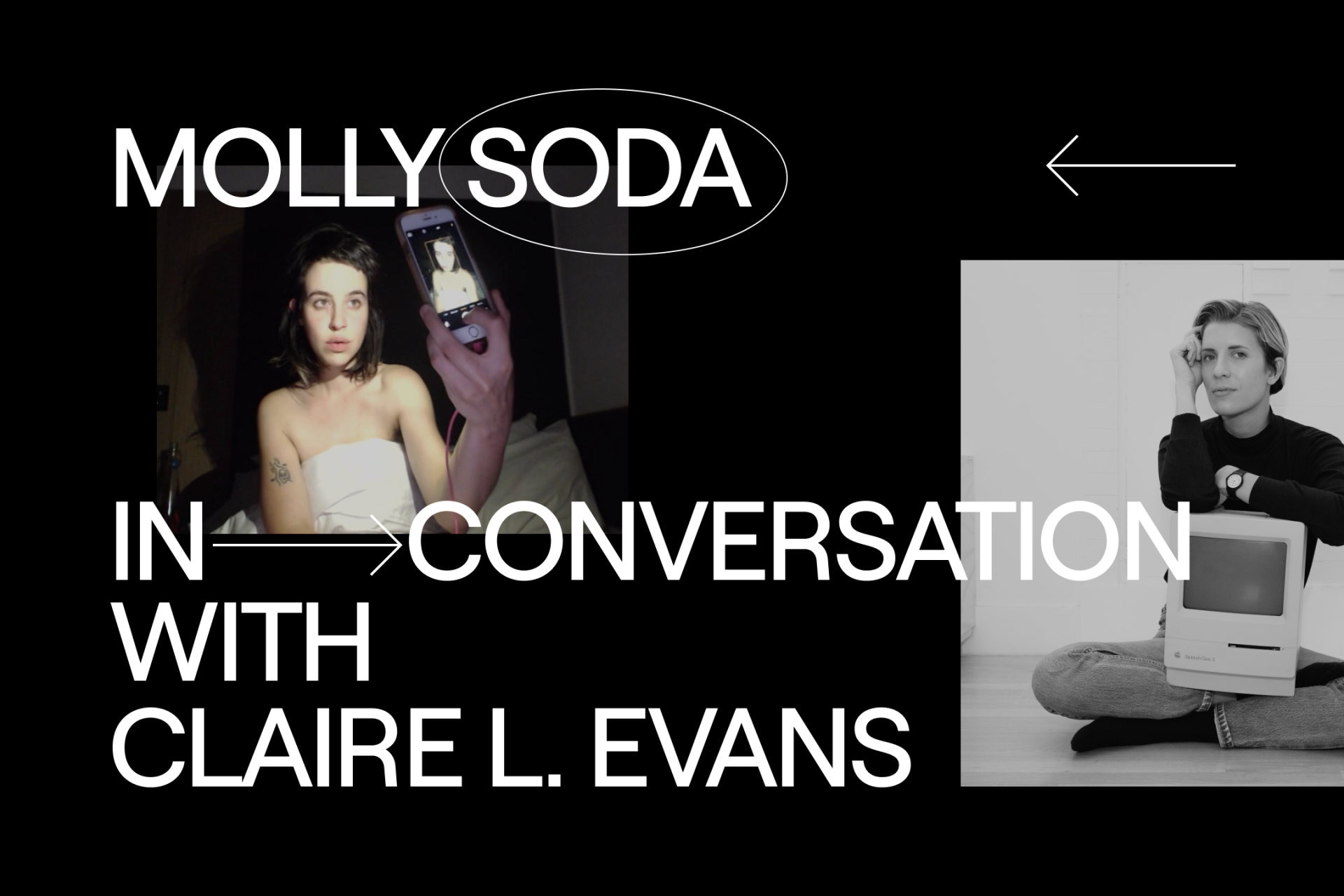 What Molly Soda has learned from watching YouTube all day.

Author Claire L. Evans and Foundation creator Molly Soda talk about aspirational aesthetics, the ruse of authenticity, and the challenges that YouTubers and artists have in common.

A potted bird of paradise. A mountainous haul of as-yet-unboxed Amazon deliveries. A millennial-pink, faux-mid-century sofa. In Molly Soda’s recent drop on Foundation, these everyday objects take on outsized meaning. Culled from Google Images and rearranged into animated gif collages, they’re a visual shorthand for the aspirational culture prevalent on YouTube, where domestic bedrooms kitted out in post-internet décor serve as sets for millions of influencers and would-be influencers worldwide.

Molly Soda—born Amalia Soto—has been making work online in her bedroom since she was a teenager, long before domestic “content creation” was the norm. A webcam performance artist and Tumblr star known for head-first, often hyper-vulnerable videos exploring identity, feminism, and the boundaries of personal space online, Soda has also been an active Youtube creator exploring the platform’s subcultures and translating their coded visual language into video work that exists as meaningfully in a gallery as it does online.

Following Molly’s recent drop on Foundation, she synced up with Claire L. Evans, lead singer of the Grammy-nominated pop group YACHT and author of Broad Band: The Untold Story of the Women Who Made the Internet, to talk about the phenomenon of YouTube influencers, aspirational aesthetics, and what we can gain from looking backwards.

What draws you to making work for and about YouTube?

I’m interested in YouTube because there's a lot going on. It's a platform that has changed so much in the last 15 years, but has maintained relevance while other platforms have come and gone. It's where so many of our aspirational fantasies take shape, or at least mine do. There's also an aspirational culture around being a YouTube content creator. You could make a living being a YouTuber, but it's very opaque how any of that actually works. Still, people think, like, "Oh, if I just post a bunch of videos about my life, eventually I'll be able to quit my day job and become a lifestyle blogger.” I'm always thinking about how the successful YouTuber is a new version of the American dream—”If I just work hard enough at curating my life, eventually I'll be paid to just exist.”

As an artist, I work a lot with webcams and bedrooms and domestic interior spaces, and YouTube has transformed my approach to all of those things. While a video made in 2007 could be just someone in their room, now the same video becomes loaded with meaning—there are all these markers of success and aesthetic choices that YouTubers make to align themselves with the broader culture. What does it mean to have, like, a fiddle-leaf fig in the background of your video? Or to have this specific candle, or this specific set of drawers to organize your makeup?

Something that comes through in your early work is the idea of customization as central to the experience of being online—a DIY aesthetic of MySpace themes and Blingees was dominant. Now that platforms limit our ability to personalize the Web so strictly, everything tends to look really flat and similar. Instead of reacting against that flatness, many content creators seem to have absorbed it into their own aesthetic. Maybe this is why so many YouTubers’ bedrooms look the same.

YouTubers film themselves in their spaces, but they’re also afraid of people noticing or talking about it too much. Everything has to be really clean, and look a certain way. There’s a lot of emulation happening on YouTube and so the more you seek out success there, the more you probably end up looking like everyone else.

That's what YouTube is really built on, or at least the part of YouTube that I watch. There's such a big part of it that's essentially just people advertising to each other.

It also translates to the way people behave on screen. I find it really uncanny how you're able to emulate the way that YouTubers talk and their body language so precisely. Is that something you rehearse?

I don't rehearse it. I watch so much—I’m literally watching YouTube in the background all day. I'm constantly aware of it. I'm also always interested in the way that people perceive my videos, because while they're funny in some ways, they're also sincere in other ways.

I love that your pieces can exist in multiple arenas, to the point where I'm like, "Is she just a YouTube influencer?” It's the same as being an artist, in many ways. The financial aspect of it is really opaque. Nobody really knows how artists or influencers make money.

Definitely. We think that if we just work hard enough we can get to the point of being successful. I was really into multi-level marketing schemes for that reason, too. YouTube feels so MLM-y to me, because it's based off of all this inspirational garbage that's actually kind of manipulative—and yet we still want it all. Working from home is the pinnacle of success to a YouTuber or an MLMer, because it's like, "I set my own hours. I can go on vacation and I can afford this lifestyle."

But then the lifestyle is your job, so you no longer have any form of leisure left.

Same with art, though.

How did you go about designing your market on Foundation?

I decided to price the animated GIFs at $3 to start, because that’s how much you would make for a thousand views on YouTube (a YouTuber can't make any money if people aren't watching them). I was also thinking about what all these things in the backdrop of a video mean, and how much money they actually cost. All of the items that I put into the backdrops of my GIF portraits are things that I found in other YouTubers’ videos that could be easily purchased online. I added up the cost of every object in the backdrop to make the ending price for each work.

Is it possible to be authentic online?

Authenticity is more of a marketing term than something anyone can actually attain. We're obsessed with it. We're obsessed with something being real, whether it's “real women” in advertisements, or something that’s “based on a true story.” Knowing that it’s real makes it better for us, but I don't understand why. It doesn't actually matter if something is fake or scripted because, at the end of the day, we just want to be entertained or informed. Maybe knowing that something is real allows us to project ourselves onto it a bit more.

A successful person is someone who’s able to come off as authentic, but still remain aspirational. We want someone who has the things that we have, but better. We're obsessed with a makeover, we're obsessed with seeing a room be really dirty and then really clean. We're obsessed with optimization and self-improvement. So on some level we want to be able to say, “Oh, this is a little bit wrong,” or, “It's not too pristine, but it has the ability to continue to move towards that.”

Have you noticed YouTube culture change significantly since COVID?

At the beginning of lockdown, I was screenshotting all the YouTube titles that had anything to do with COVID. “My quarantine blog,” or “My COVID food diary,” or whatever. I don't know what the future holds, honestly, but it's going to be interesting to see these videos as artifacts of this time. I wonder if they’ll really feel like that or if they’ll just feel normal because we will still be in this time. That's why I like YouTube so much—it’s a weird archive of all of these really meaningless feelings. We think of YouTube as entertainment, but I feel like it's very rich. It's a very beautiful time capsule.

I've also been making a collection of YouTubers apologizing in their videos. Whenever I see it happening, I save it to a playlist. I don't know what I'm going to do with them eventually, but there’s so much apologizing going on because, as a YouTuber, you're already thinking about what people are going to say in the comments. There's always this feeling of, "Oh, sorry, there's construction outside." Or, "Sorry, I just got over a cold." Or, "Sorry the lighting is weird.” There's this self-consciousness that happens, and that anxiety is a big part of everything on YouTube.

Do you ever look backwards?

I've been publicly sharing my life online to various degrees since I was 14. I'm always going back and looking at older platforms, like LiveJournal and MySpace and Xanga, which don't exist anymore. All these older sites are just rotting away. We place so much emphasis on these platforms to hold our lives, but most people aren't thinking about, "Oh, I don't own that content on Instagram. If I don't back it up, Instagram might just go away." When I was in high school, I didn't think to back anything up. I wasn't thinking about, "Oh, what does my layout look like right now within the context of all these other things?" I'm more committed to that kind of archiving now. I'm sad that I didn't save screenshots of more of my early-internet interactions, because now I have to cobble it together via memory. It feels like, “If only I had one screenshot of my Xanga from 2005.”

It’s interesting to think about this in the context of crypto—now you have digital tokens that ostensibly will outlive you. How has turning your digital art into tokens felt? Do you see a lot of possibilities there?

I think so. I can't afford to buy art from galleries—but I like to look at it and support when I can. I tend to buy prints, zines, and books. In the future, I hope that there can be more ways for artists to make money that don’t feel like you're compromising your work. Historically, digital art has been difficult to sell in the contemporary art market. It will be interesting to see how crypto will change that. 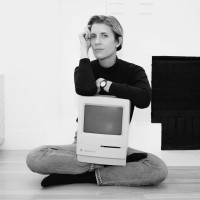