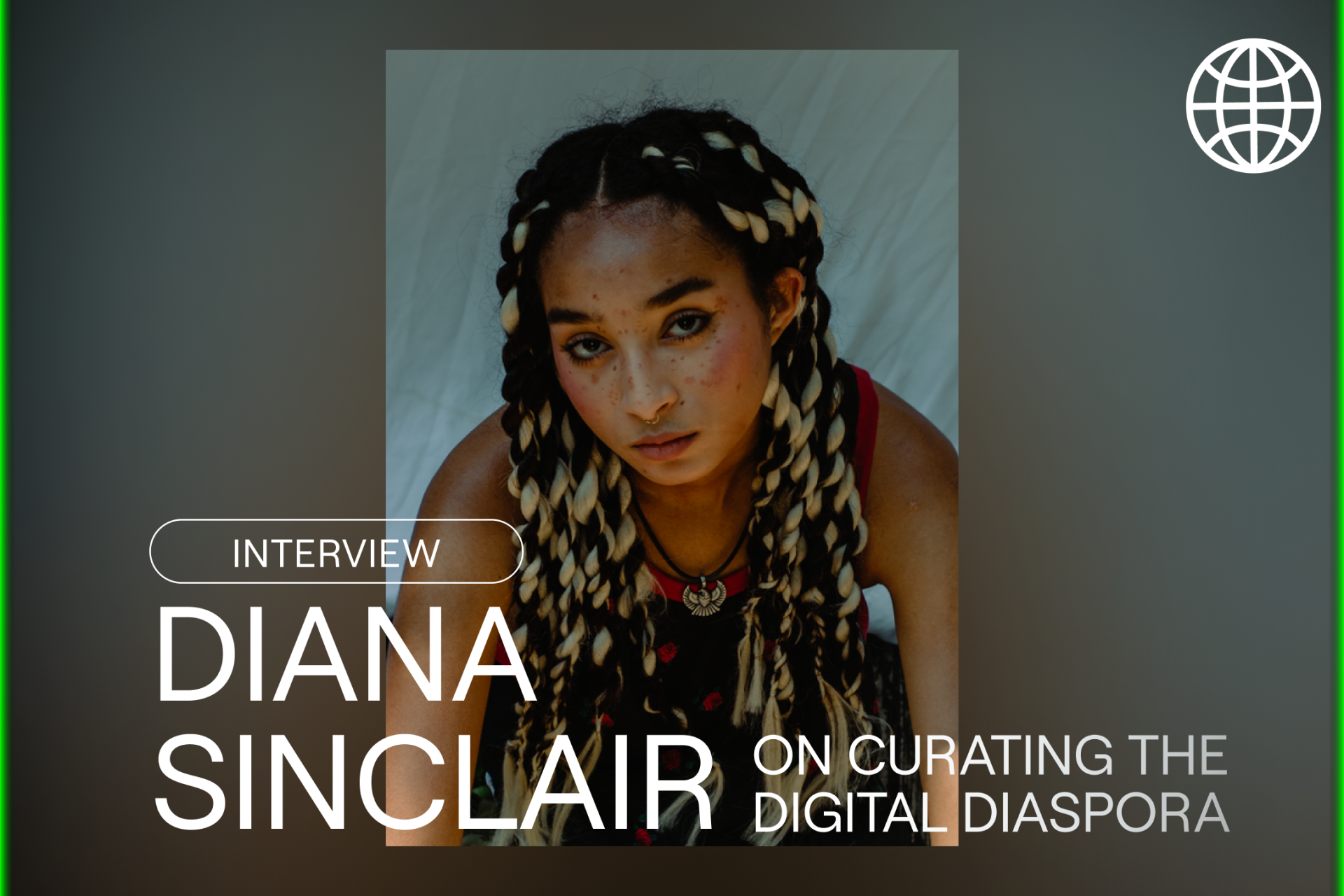 The artist and activist is on a mission to champion work by Black creatives in the metaverse and beyond.

When artist, activist, and curator Diana Sinclair first learned about the NFT space, she quickly noticed that Black creatives were not getting as much recognition and opportunities as other artists were. Driven by her personal experiences of exclusion, she felt compelled to course-correct, and use her growing platform to both uplift and support Black artists. On Juneteenth, a day celebrating Black freedom, Diana opens The Digital Diaspora, an exhibition she organized with Black creatives from all over the world. She understands the opportunities that the NFT space makes available to all artists, and wants to use the technology to not only widen the space for Black creatives, but to address the intersectional marginalization of Black people as a whole.

The Digital Diaspora is meant to raise greater awareness of Black art and artists, but also benefit the Black queer community. Proceeds from the auctions will go towards championing the work of herstoryDAO, a digital collective dedicated to the preservation and funding of artistic endeavors by Black women and non-binary poeple, and G.L.I.T.S., an organization providing free housing, guidance, and protections for Black trans people. Wise beyond measure, Diana’s hope for a more level and equitable playing field isn’t just a dream—it’s a vision that she is actively taking steps towards making reality. The Digital Diaspora is only the beginning.

Can you talk about the idea behind The Digital Diaspora and what you were looking for in terms of the artists that you wanted to work with?

For The Digital Diaspora, we are working with Black artists from six different countries. The exhibition speaks to how Black culture has influenced all cultures, but Black artists have still not received reparations, credit, or proper monetary compensation for their contributions. There's this saying that, “What's ghetto is just what's unpopular Black creativity,” and it's true, because after it's adopted by white people, that's when things that were previously ghetto become popular. Black creatives have shaped global pop culture—you see it from K-pop groups, to rappers in London, rappers in America, and all over the world—to the point where it's just ingrained in our minds. Gen Z slang is Black American slang. Considering the idea that it's not just Black Americans who have been stolen from, but Black people all over the world, it made sense to make sure that we included artists from everywhere.

The artists in The Digital Diaspora are so innovative and creative. We have a lot of smaller artists in this exhibition, and I think that they deserve so much more than what they've received, whether that's recognition, bids, or opportunities. It was very important to make sure that we highlighted the artists who are putting out really creative work, so that they have their moment in the spotlight that will hopefully continue past the show.

I love that sentiment because it speaks a lot to the work that you’re already doing, like sharing long Twitter threads of work by Black artists—which is something that we all really started to take notice of. Why is increasing visibility for Black artists in this space so important to you?

This is personal and really sad, but I'm younger than all of the artists in the exhibition, and I’ve already experienced a lot of exclusion and negativity towards myself as an artist. It’s upsetting, because I don't think much of that has been direct, but microaggressions come across in the ways that people speak to you, or whether they choose to speak to you. There are these moments of exclusion that I have experienced, and from a very young age, I understood why. Providing visibility and opportunities has always been important to me, because if it's not coming from us, then who is going to be doing this work? It takes somebody who has experienced being excluded—and experienced that heavy feeling of wondering whether my art matters, or if I’m valued—to make a change.

For those Twitter threads, it was important to me that I started with one for Black women photographers. I knew that not only with their lack of knowledge about the space, but the disadvantage that they were entering at, that it took somebody who knew other people or had a larger platform to introduce them to NFTs. Since then, I think that a lot of those women have actually been doing much better, and it obviously isn’t all because of the threads, but maybe that is what got their work in front of people who wouldn’t have seen it otherwise. This is what we're trying to do with The Digital Diaspora: take visibility to the next level.

What's also important is when I mentioned, "Who's going to do it, if not us?" Unfortunately, there are so many artists who could not be included in this exhibition, but that does not mean that they don't deserve visibility or opportunities. We need to uplift a few so that they can turn around and bring up more. So, just like you all saw me, and I was able to bring up more artists, those artists we are now lifting others up.

It’s important to make sure that we can continually uplift. You can't uplift everyone at once, but if we can send out a ripple into the community, they’re going to turn around and support each other. It all has to start somewhere. Visibility is important, even though it’s one step down from putting money directly in people's pockets, it's essential because being looked right through is the worst feeling. Especially when you know that it has nothing to do with you, but with the way you look and the biases that are against you.

That's so wise. It’s a very beautiful way of making it known that taking these steps are important.

I want to bring it back to curation. So there's a physical exhibition in New York and a metaverse exhibition in Cryptovoxels, what is your approach to curating those two spaces?

In terms of curating, the same artworks are in the gallery, in Cryptovoxels, and on Foundation. It’s important for the artists to realize that they are being given space, and when we're talking about visibility, taking up physical space, metaverse space, and space on Foundation is huge. We can look at them and tell them that they are artists, but to realize that their work is in Manhattan, in a Cryptovoxels plot, and on Foundation, it also lifts up their mental health and mental states.

Many of the artists in The Digital Diaspora haven't seen their work in a gallery yet, they just draw on their tablets and post their work on Instagram. They also haven’t really received compensation for their work, but hopefully with this exhibition, they'll be able to legitimize their feelings as an artist.

The Digital Diaspora revolves around Afrofuturism, which is this philosophy and way of thinking about what the future will be like for Black people. Afrofuturism actually goes a step further because it's radical to even think that we'll be thriving in the future with the way that we've been treated in the past. A lot of the work incorporates this theme and it all came together in a beautiful way. I'll be honest, I was feeling a little bit nervous because the works looked so different from one another. I was anxious that the theme wasn’t as consistent, but this is The Digital Diaspora, and we have minds from all over. We have artists from Australia, Europe, America, and Africa being represented, and in a way, that’s even more authentic to Afrofuturism.

Why did you select G.L.I.T.S. as a beneficiary of the auctions?

I don't know if this is understood by everybody, but unfortunately, Black trans women are the most oppressed in our society. There are so many intersections of oppression that Black trans women face like misogyny, racism, transphobia, and even homophobia, and because of that, those intersections of oppression have very hard stats on what they've had to experience in the real world. The life expectancy of a Black trans woman is 35 years of age, which isn’t old at all. I've had friends who have been nearing 35 and have said, "I'm just going to live my life because I don't know what's going to happen." That is beyond horror. I can't even begin to understand it.

The core idea of this project is liberation and freedom, and if Black trans women are still dying on the streets, unable to eat and are not safe, then we're not really working towards true liberation. G.L.I.T.S. helps with housing and protection and gives Black trans women all of the things that they need to thrive.

When I said earlier that it was a radical idea that Black people would thrive in the future, that is Afrofuturism. We need to make sure that we take the actual steps towards that. We're taking those steps in the metaverse with herstoryDAO, and we're taking those steps out in the physical world. That’s why it’s important that we are directing funds to G.L.I.T.S. and supporting them and the work that they are doing.