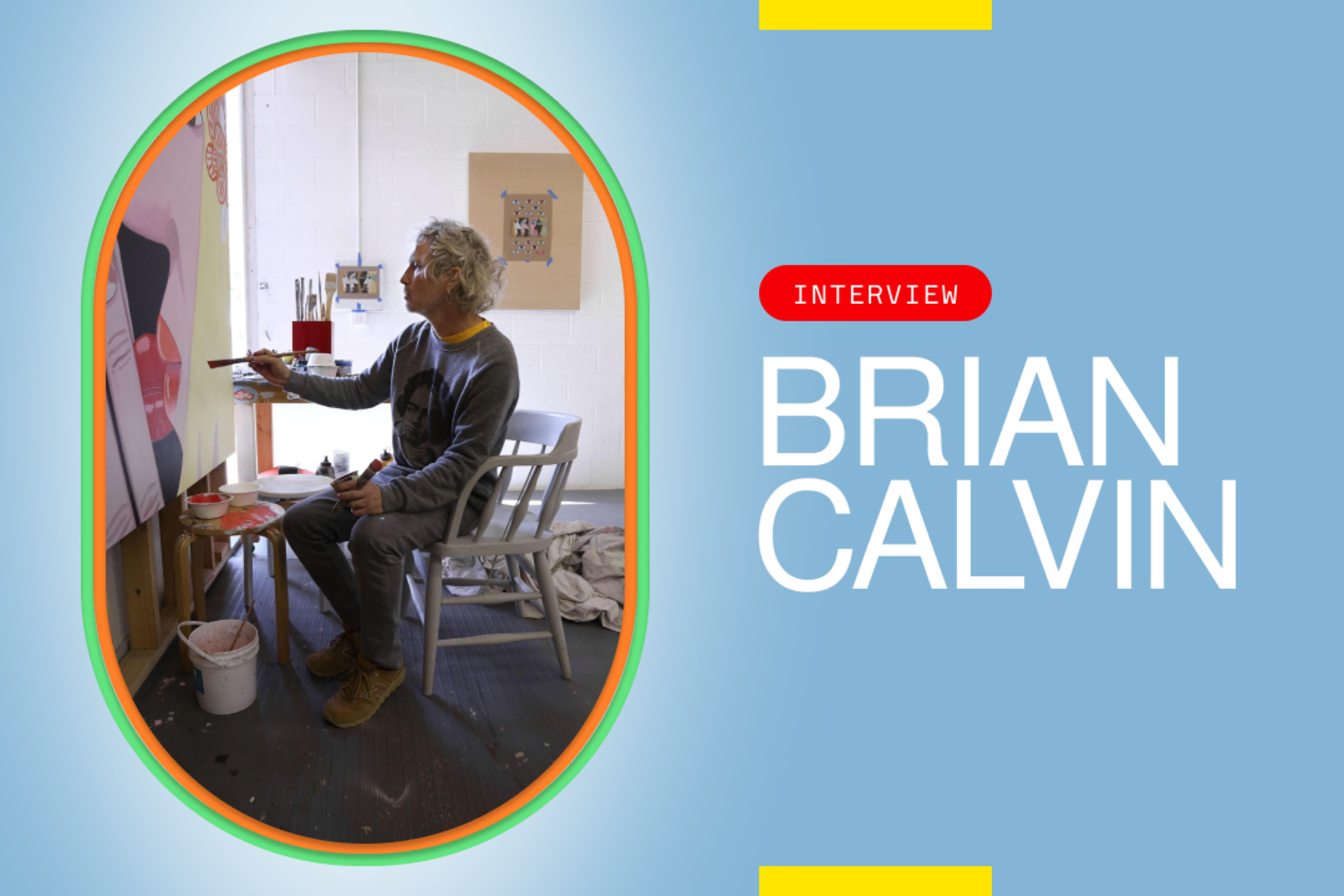 Brian Calvin on his imaginary portraits.

How the California artist painted his way into NFTs.

Brian Calvin is a contemporary artist known for close-up paintings of portraits and figures. He typically paints portraits of people who don’t exist, in a cool palette of California colors, giving his paintings a sense of remove. Questions of how we construct our own identities in the face of abstraction is central to Calvin’s practice. Viewers experience an overwhelming flatness from his works on canvas, but he wanted to challenge this narrative with his first NFTs.

Calvin’s work is in the collections of the Los Angeles County Museum of Art, Portland Art Museum, and the Aïshti Foundation, and he has had solo exhibitions at Anton Kern Gallery in New York, Almine Rech Gallery in Paris, and Corvi-Mora in London. For his first foray into NFTs, he is pushing the limits of his practice and learning new programs to seamlessly translate his paintings to the digital.

When was the first time you heard about NFTs? What did you find the most interesting about them?

NFTs first came to my attention late last year, when my gallery asked if I was interested in producing one. I had never heard of them and must admit that I didn’t quite know what to think of them. I don’t find any medium inherently interesting, but I do like the challenge of experimenting with new media. It took me a while to come up with something that felt appropriate for the project, and I didn’t want to just make a high-res reproduction of a painting or something like that. I started running with various ideas and approaches. By the time I found my stride a few months ago, NFTs were everywhere.

Can you tell me about the two portraits that you are minting—how are they related to figures or visual motifs that have appeared before in your work?

Screen Test (Despina) and Screen Test (Pearl) both begin with one of my own previously finished paintings, which are themselves imaginary portraits.

Can you expand on what you mean by saying that the paintings were already made as "imaginary portraits"?

I don’t work from models or photographs. I typically start with a detail—an eye, or a mouth, and then just work out from there. In some ways, I’m free associating with details from every painting I’ve ever come across, and every person I’ve ever seen. I paint things in, and then paint them out. At a certain point, details start to coalesce, and I start to sense something resonating underneath that sparks my soul. Screen Test (Pearl) was originally a painting I made this way in 2016. Screen Test (Despina) was a painting that I made when I was invited to install paintings during a production of Così fan tutte at the Metropolitan Opera in 2018. Neither Pearl nor Despina are a representation of an actual person, but by the time the paintings were finished the figures felt like real people to me.

What was your process like for animating each of the paintings?

The portraits are reversed engineered from the completed paintings by manipulating and processing the images through a grab bag of apps, various AI programs, face tuning, and editing. It felt like I was trying to reanimate the figures, when in actuality they had always been inanimate. I like how the degraded visual quality of the images give the portraits an analog “last known photo” feel. The “Screen Test” in each title is a nod to Warhol’s black and white, silent short film portraits made in the mid-sixties.

I like that you reference Warhol's Screen Tests as an influence for these works. When during your process did you decide that this was a direction you wanted to take?

They weren’t a direct influence, because it was the AI programs that gave the animations their specific movement. I had no direct control over those aspects. However, those movements combined with the silence immediately brought the Screen Tests to mind. Without that precedent solidly lodged in my brain, I may have been tempted to add sound, and to go in another direction, but I find the silent animations much more compelling. They add a sense of remove that amplifies the mystery.

What possibilities do you think NFTs present to traditional painters? Do you think they can broaden their visual vocabulary, or represent something entirely new?

To be honest, I don’t know. Like any other medium, NFTs will be expansive in some cases, and redundant in others. For me, the challenge was making something that couldn’t exist in another format.

What were some of the challenges you encountered as you were translating your work into NFTs?

I experimented with a lot of images, and a lot of programs. I liked the idea of using readily available apps as a toolbox. I’m no expert in the digital realm, and I wanted to harness my primitive skills to use my limitations as a way to discover creative solutions. Which is really to say that I didn’t want to farm this out to someone with expertise in the field. For quite a while, all of my experimentations failed, but then eventually I failed my way into something new. An artist’s most reliable tool is failure, as long as they’re willing to keep on keeping on.